In recent years, there has been a resurgence of interest in the use of hearing aids with a directional microphone. This type of transducer has been reported to improve the speech recognition ability of hearing-impaired patients in moderately noisy listening environments when evaluated in a sound-treated booth.1-6

Recently, the hearing aid industry incorporated the use of digital signal processing (DSP) techniques into the design of directional hearing aids and introduced hearing aids with adaptive directional microphones (ADM).7 In adaptive microphone systems, the polar pattern of the directional microphone reportedly changes in response to signals arriving at different azimuths to the listener. This switching of polar patterns is designed to ensure the best signal-to-noise ratio (SNR) for the wearer regardless of the azimuth of the noise. The wearer, however, may still need to switch from the ADM mode to the omnidirectional (omni) mode in quiet.

Recently, Widex introduced an automatic adaptive microphone system, called Locator™, in its Senso Diva digital hearing instrument. This ADM features an automatic Adaptive SNR Optimizer system that changes the polar pattern from omnidirectional to any directional pattern while compensating for the changes in low frequency response associated with each pattern. The hearing aid can be dispenser-programmed into a fixed directional mode with a hypercardioid pattern, an omnidirectional mode, or an adaptive Locator mode (default setting). The system also contains an OptiMic system that reportedly ensures identical sensitivity and phase characteristics of the dual microphones.

Although the close microphone separation in the ITC model (about 5 mm) provides for a cosmetically pleasing hearing aid, some may question if it is large enough to result in a significant SNR improvement. Because the performance of this adaptive microphone has neither been compared to its omnidirectional counterpart nor has its effectiveness been demonstrated when noise sources are generated from the sides and/or the back, we conducted the current study to establish the effectiveness of this automatic ADM system.

Study Method
Subjects. Twenty adults with a mild-to-moderately severe bilateral symmetrical (+/-15 dB from 250-4000 Hz) sensorineural hearing loss8 were included in the study. All the subjects had word recognition scores greater than 40% at their most comfortable listening level (MCL). All the subjects were experienced binaural hearing aid wearers. The average experience with the current analog omnidirectional hearing aids was slightly more than 5 years (64.5 months, s.d. = 28.7 months). At the time of the evaluation, all the subjects’ hearing aids were found to be functioning properly and providing satisfactory use to their wearers.

Subjects were not informed about the signal processing or identity of the hearing aids during the study. It is important, however, to note that in spite of all efforts to “mask” the subjects to the identity of the experimental hearing aids, the subjects obviously were not “blinded” as to which was the control condition (ie, own aids) or the test aid condition (ie, Senso Diva). Therefore, due to the Hawthorne (or “Halo”) effect,9 any difference in subjective performance between the subjects’ own aids and the experimental hearing aids must be viewed with caution. Subjects were offered the option to purchase the experimental aids at a reduced cost at the conclusion of the study or be provided financial compensation.

Sixteen subjects were fit with ITC and four were fit with ITE models because of ear sizes. The in-situ directivity index of the ITE is identical to the ITC because of the same port separation and internal time delay. All the hearing aids were vented based on the degree of hearing loss at 500 Hz. Vent diameter was 2 mm for 30 dB HL or less, with a 0.5 mm decrease in vent diameter for every 10 dB increase in hearing loss.

The Widex fitting software (Compass version 3.1) was used to program the hearing aids following the recommended procedure. An in-situ threshold (or sensogram) was determined at 500 Hz, 1000 Hz, 2000 Hz, and 4000 Hz followed by a feedback test. The initial fit was verified by using the Input-Output curve in the fitting software to assure that the predicted aided thresholds were around 20 dB HL to 2000 Hz, and at least 30-40 dB HL at 4000 Hz. The Frequency-Output graph within the software was used to ensure that the predicted in-situ output for input levels at 40 dB, 65 dB, and 90 dB SPL was within the dynamic range of the listener. These two steps ensured optimal audibility and comfort with the initial fit. Subjects wore the hearing aids for 1 week before the aids were fine-tuned. Afterwards, subjects wore the aids for 4 weeks before returning for laboratory testing.

Testing for Unaided and Aided Thresholds. Monaural unaided and aided (own aid and Senso Diva with Locator) thresholds were obtained using warble tones at 500 Hz, 1000 Hz, 2000 Hz, and 4000 Hz.

HINT Reception Threshold for Sentences (RTS, in dB) was obtained for three loudspeaker conditions (180° [rear]; 90°+270° [right+left sides]; and 90°+180°+270° [right+left+rear]) with each loudspeaker placed at 1 meter from the subject. Four listening conditions (unaided; aided with own aids; Senso Diva [test aid] programmed in omnidirectional mode; and test aid in automatic adaptive microphone mode) were evaluated. Unaided and aided RTS for the subjects’ current aids were measured when the subject first entered the study. All 12 experimental conditions were randomly assigned to avoid order effects. In addition, no sentence list was repeated to reduce potential learning effects. An uncorrelated continuous party noise, presented at an overall level of 68 dBA recorded in a room with approximately 4-5 s reverberation time, was used as the competing noise.

Abbreviated Profile of Hearing Aid Benefit (APHAB) The APHAB10,11 is scored as four subscales: Ease of Communication (EC), Background Noise (BN), Reverberation (RV), and Aversiveness to Sounds (AV). Subjects respond to each question for unaided and aided problem scores. Responses to the unaided and aided segments for subjects’ own hearing aids were obtained prior to the fitting of the test hearing aids. Responses to the aided segment for the test aids were obtained at the end of the 4-week trial after the subjects had worn them in the automatic ADM mode. Hearing aid “benefit” (in percent) is defined as the difference between the unaided and aided problem scores.

Results
Unaided and Aided soundfield Thresholds: Figure 1 reports the mean unaided and aided (own and test aids) soundfield thresholds at 500 Hz, 1000 Hz, 2000 Hz, and 4000 Hz. Because of similar findings between ears, the thresholds for the right and left ears were averaged. A repeated randomized block ANOVA9 revealed a significant main effect of hearing aid (F = 171.30; df = 2,239; p < 0.0001), frequency (F = 73.82; df = 3,239; p < 0.0001) and a hearing aid by frequency interaction (F = 7.85; df = 6,239; p < 0.001). Post-hoc analysis using the Tukey Honestly Significant Difference (HSD) (p < 0.05) revealed that, at each test frequency, the mean difference in the soundfield threshold between the test aid and unaided, test aid and aided-own, and aided-own and unaided was significant. The post-hoc HSD test on the hearing aid effect revealed that the mean difference between unaided and omni-own (10.2 dB) and test aid (22.2 dB) was significant. The HSD also revealed that the mean difference (11.9 dB) between the subjects’ own aids and the test aid was significant.

Figure 2. Mean Reception Threshold for Sentences (RTS in dB) on the HINT for unaided, aided-own, test aid in omnidirectional mode and test aid in ADM mode at the three loudspeaker conditions.

Figure 3. Mean APHAB benefit scores for the EC, RV, BN and AV subscales for the subjects’ own hearing aids and the test aid in ADM mode.

Discussion
Comparison to studies using similar loudspeaker configurations: There are at least two recent studies3,5 that investigated directional performance using loudspeaker conditions similar to those used in the current study. With a loudspeaker at 180° (rear condition), Ricketts5 reported a mean RTS of -5.3 dB for the Senso C9 (BTE DSP aid with a fixed hypercardioid response), while the current study reported a mean absolute RTS of -6.3 dB for the ITC/ITE Senso Diva-Locator. It is important to note that, in the Ricketts study,5 the mean RTS (-5.3 dB) represented the average of two reverberation conditions (631 ms and 1097 ms). This procedural difference, along with other possible differences—such as signal processing between the Senso C9 and Senso Diva, BTE versus custom ITE/ITC, type of noise (cafeteria noise vs party noise), magnitude and configuration of the hearing loss, and overall level of the noise (65 dBA versus 68 dBA)—may partly explain the 1 dB poorer performance reported in the Ricketts study5 compared to the results reported here.

With loudspeakers at the five side and rear ordinates (90°+135°+180°+225°+270°) and a reverberation time of 642 ms, Ricketts & Dhar3 reported a mean RTS of -4.1 dB for the Senso C9, while Ricketts5 reported a mean RTS of -3.9 dB averaged across reverberation times of 631 ms and 1,097 ms for the same BTE aid. In the current study, using a similar loudspeaker arrangement, but with minimal reverberation, the mean RTS for the Diva-Locator ITE/ITC was -3.9 dB. Thus, the results from the current study are in close agreement to those reported in the other two studies.

Comparison to studies using custom hearing aids: Many studies have reported the benefit of directional BTEs in improving the recognition of speech in noise (see Amlani12 for an excellent review of directional advantages). Few studies have looked at the benefits provided by directional microphones in custom products. The current study is one of a few that revealed a directional benefit (directional minus omnidirectional performance) between 4.5 dB and 5.1 dB for the two more diffuse listening conditions (ie, sides and sides+rear).

The advantage of having a low compression threshold is that it allows the softest input signals to be more audible. Thus, if the overall output of two hearing aids were adjusted to be equal for an input of 65 dB SPL, then the hearing aid with the lower compression threshold would result in the lower aided soundfield threshold. Pascoe13, Mueller & Killion,14 and Skinner et al.15 suggested that achieving an aided soundfield threshold of 20 dB HL may ensure that all speech cues are audible from 300 Hz to 4000 Hz for patients having a moderate to gently sloping hearing loss. As stated by Skinner et al.:“…the greater the portion of speech sounds that are audible, the greater the potential is that soft sounds will be recognized and conversation will be more fluent”15 (p. 316).

APHAB: In this study, the mean difference in benefit scores between the Locator and the subjects’ own aids were 12.4%, 15.5%, and 15.8%, for the EC, BN, and RV subscales respectively. Cox11 suggested that a difference of 10% in benefit scores between hearing aids would reflect a 96% probability that the difference was statistically significant. This suggests that the study hearing aids provided greater benefit than the subjects’ own hearing aids in daily communication situations (as seen in the EC subscale) and in situations where reverberation and background noise (as seen in the RV and BN subscales) are prevalent.

As stated earlier, it was not feasible to incorporate “blinding” procedures into the experimental design of the current study. Therefore, due to the Hawthorne, or “Halo” effect9, the improved benefit reported for the test aid over their current analog omnidirectional hearing aids should be interpreted with caution.

Conclusion
Despite the closeness (5 mm) of the microphone ports in the ITC/ITE Senso Diva, the adaptive directional microphone (Locator) in the Senso Diva is effective in improving the SNR of the listening environments over an unaided condition, aided with own hearing aids, and aided with the Senso Diva in the omnidirectional mode. This improvement is also reported in various daily listening environments. The automatic adaptive directionality, as well as the improved audibility for soft sounds (as seen by the aided thresholds), may have contributed to the positive findings. w

Acknowledgments
The authors thank Widex Hearing Aid Company, Inc for providing a small grant to cover the direct costs involved for completing the project and allowing the subjects to purchase the experimental hearing aids at a significantly reduced cost at the conclusion of the study. The authors would also like to thank Francis Kuk, PhD, and John Nelson, PhD, of Widex for their insightful comments and suggestions on earlier drafts of this manuscript. Finally, the authors would like to thank Irene Costas at Washington University School of Medicine for her help in completing the statistical analysis and appropriate interpretation of the data reported in this manuscript. 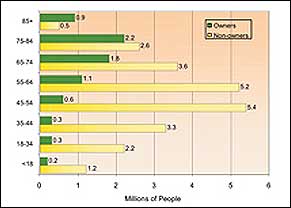