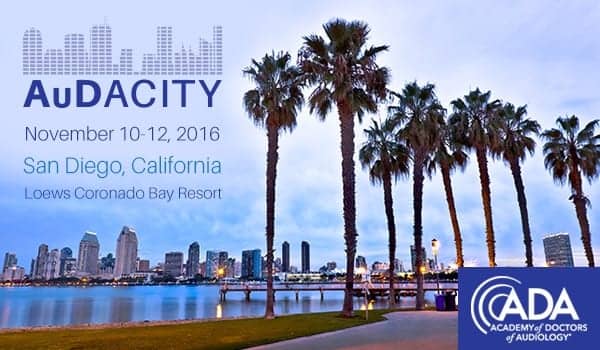 A reported 500 audiologists and industry experts attended the Academy of Doctors of Audiology’s (ADA) 2016 AuDacity convention held November 10-12 at the Loews Coronado Bay Resort in San Diego, Calif. The theme of AuDacity 2016 was “Dare to Succeed,” yet—as foreshadowed by the election of Donald Trump as president 2 days before the convention—the keywords throughout this year’s event were disruption and change. 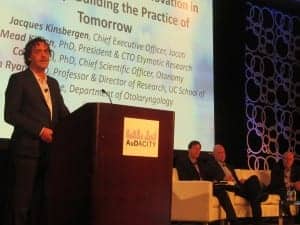 A special presentation on disruptive innovation in hearing healthcare featured viewpoints from Jacque Kinsbergen of Jacoti, moderator Michael Cohen, esq, Carl LeBel of Otonomy, Mead Killion of Etymotic Research, and (not pictured) Allen Ryan of the University of California-San Diego.

The convention exhibit hall offered the products and services of over 50 companies and associations. Notably, only 3 of the “Big 6” global hearing aid companies participated in the exhibit hall: Sonova (Phonak & Unitron), William Demant Holding (Oticon & Sonic), and Widex; however, there were also several new exhibitors, including Jacoti (suite of mobile technology hearing devices), Nupur Technologies (otoscope and irrigation system), and the Entheos Audiology Cooperative (independent private practice group). More than 40 special presentations and seminars were offered at this year’s ADA meeting, including pre-conference workshops on Thursday morning ranging from reimbursement coding to buying and selling a practice. 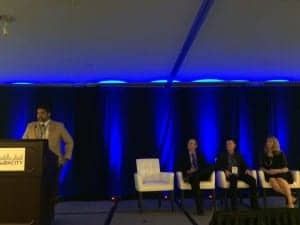 General session. At the General Session, ADA President Rita R. Chaiken, AuD, noted that it has been a momentous year filled with acronyms—IOM, NAS, IOC, FDA, PCAST, and OTC—and disruptive change. “We’ve been faced with disruptive forces and technologies in the profession and in the hearing aid industry,” said Chaiken. “In response, this past year, ADA has been proactive in preparing our members to practice in the wake of the changes culminating here at AuDacity 2016. This gathering focuses on how we can best use these changes to create newer and better models to provide exceptional care [for our patients].”

Chaiken said the convention’s “Dare to Succeed” theme signaled challenges for not only ADA, but also for the American Academy of Audiology (AAA) and the American Speech Language Hearing Association (ASHA). She pointed out that all three organizations have worked together on several initiatives, lobbying against the International Hearing Society’s (IHS) “Fit to Serve” Bill and National Guidelines for Apprentice Hearing Aid Specialists. Additionally, ADA and AAA issued a joint response to the Institutes of Medicine [IOM, now called the National Academy of Sciences or NAS] recommendations. Chaiken says all three audiology organizations also came together on committees, such as the newly formed Chronic Disease Collaboration (now called the Audiology Project).

Chaiken says that ADA moves quickly, characterizing the Academy as “the first responder” for audiologists. In particular, she noted that ADA: 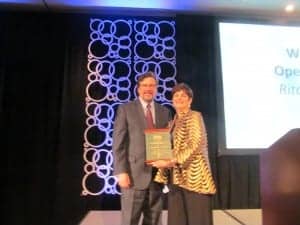 Victor Bray was presented with the David P. Goldstein Award for his work in making the audiology program at Salus University one of the biggest and best in the nation.

Chaiken also recognized several distinguished members of the Academy, including ADA Executive Director Stephanie Czuhajewski for her work. She also paid special tribute to three audiologists for their unique contributions to the field:

Interspersed throughout the general assembly were student presentations for the annual Business Plan Competition, that was sponsored by The Hearing Review and hosted by Brian Taylor, AuD. This year’s winner was Sarah Smith of Wayne State University. 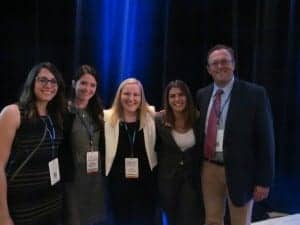 The keynote presentation at the General Assembly was delivered by NFL football great, Karl Mecklenberg. The former Denver Broncos and Minnesota Gophers star used related examples in sports and business to show how you can use teamwork, courage, dedication, desire, honesty and forgiveness, and goal-setting as a framework for success.

Educational sessions. A common thread that ran throughout the convention were the recent 12 recommendations made by National Academy of Sciences (NAS), which are similar to but widely considered an “evolutionary step” above the recommendations made by the Presidents Council of Advisors in Science and Technology (PCAST). David Zapala, PhD, an audiologist at the Mayo Clinic Jacksonville (Fla) and a member of the NAS Hearing Aid Affordability and Accessibility for Adults Committee, started off the regular AuDacity Program with an overview of the committee’s recommendations. Most of the NAS recommendations are broadly accepted by hearing care professionals, industry, and consumers (eg, the need for more research and public information about hearing loss and amplification), but Zapala pointed to several important nuances within the recommendations, while acknowledging at least five points that could generate considerable change and controversy: 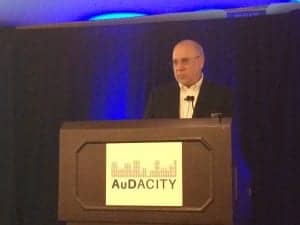 David Zapala of the Mayo Clinic Jacksonville presented an overview of the recommendations made by the Committee on Accessible and Affordable Hearing Health Care for Adults on which he served as a member.

1) The elimination of the “waiver system” which requires a medical referral or waiver prior to obtaining a hearing aid;

2) The establishment of a separate over-the-counter (OTC) device category for consumers with mild-to-moderate hearing loss and related non-professional self-assessment and fitting strategies;

3) The call for patient “ownership” of their test results (including their audiograms) and records portability (including programming information);

4) More open systems, including assistive devices that can be used across platforms, and the elimination of manufacturers’ software that “locks out” clinicians from reprogramming hearing aids, and

5) Improved affordability and transparency in billing, including the unbundling of products from services in hearing aid dispensing.

In a 3-hour 2-part seminar titled, “Innovation & Disruptive Service Delivery Models,” Barbara Weinstein, PhD, Douglas Beck, AuD, and Brian Taylor, AuD, offered their perspectives on how hearing healthcare may need to change in the face of disruptive forces, such as the NAS recommendations, new product categories like hearables, self-testing and fitting technology, and telepractice. Dr Beck pointed out that the first 100 years of audiology were dedicated to measuring hearing of the ear, while the next 100 years will be about listening and comprehension of the brain—particularly in noisy environments. This means that, today, dispensing professionals need to concentrate more on verification and validation of hearing in noise. He also led a lively discussion about the NAS recommendations and how they might impact audiology, with opinions from the audience that included ASHA Chief Staff Officer for Audiology Neil Disarno and former ADA Presidents Kim Cavitt, AuD, and Larry Engelmann, AuD. 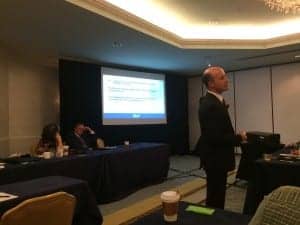 Dr Taylor explained the forces behind the “creative disruption” in our field: healthier consumers with longer lifespans and higher expectations; innovative healthcare delivery models like drugstores, community workers, telehealth, and mobile apps; and patient-centric models that focus on value-driven services. He says too much time is spent talking about technology. Instead, hearing care professionals should use the chronic care model to treat people “where they are” and address their individual needs while viewing technology (eg, hearing aids, telehealth, apps, etc) as only tools in that process. 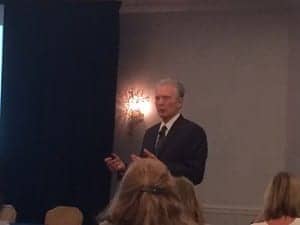 Dennis Van Vliet, AuD, presented a slideshow of potential disruptors to hearing care practices and posed the question, “Is this a disruptor…yet?”

Also focused on the theme of disruption was a session led by Dennis Van Vliet, AuD, titled “Embrace Disruption, and Own It!” Dr Van Vliet presented a slideshow of images comprising an array of potential disruptors to the hearing care industry, which stimulated a lively discussion during his talk. Van Vliet invited interaction from the ADA audience by posing questions like, “Is this really a disruptor?” or “This may not be disrupting your practice yet, but will it soon become a disruptor in your practice?”

Several sessions cited the emerging scientific information linking hearing and amplification to social isolation and engagement, cognitive impairments, and other associated comorbidities (eg, diabetes, depression, falls, etc). For example, Dr Weinstein made a persuasive case that new models of hearing healthcare delivery should address better competency and training in geriatrics, the promotion of social engagement for older patients (ie, the highest correlate for satisfaction with hearing aids), and better care for patients who are in advanced stages of physical decline. “Maintaining an active and engaged lifestyle by participating in meaningful activities can mitigate the adverse effects caused by functional limitations,” says Weinstein.

Weinstein noted that many patients are now asking practitioners if they will get Alzheimers disease if they don’t wear hearing aids. She says this is similar to asking “If I eat a greasy cheeseburger every day, will I die of a heart attack?” The answer, of course, is “No, but no healthcare professional would recommend it.” She says that studies point out that those older adults engaged in 6 or more leisure activities are at significantly lower risk for developing dementia. In a subsequent general session, Anu Sharma, PhD, provided an overview of her ongoing research that shows how brain plasticity allows the brain to change in response to hearing loss (including mild losses) and lack of auditory stimulus, with  implications on cognitive load and intriguing implications about cognitive impairment. 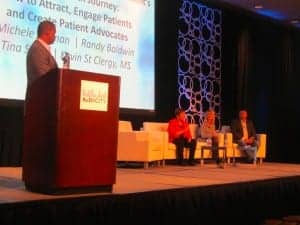 Randy Baldwin of CareCredit hosted a special seminar on attracting consumers, engaging with patients and creating advocates for your practice with Tina Soika, Michele Ahlman, and Kevin St Clergy.

There were also plenty of sessions for those seeking new ways to improve their business and revenues, or trying to stay on top of updates about the market. For example, Mark Sanford, MS, Cathy Howard, along with Mark Harned and Nicole Mirabelli from CallSource, presented the seminar “Managing Business Constraints–Understanding the Roadblocks to Success” which addressed common problems encountered in practices ranging from call-tracking to patient follow-up. They made a compelling case for the importance of getting front office staff trained in phone skills to help convert more calls to booked appointments, thereby increasing revenue for the hearing care practice.

On Friday, David Smriga, MA, offered a market overview of the hearing industry titled “Asleep at the Wheel 3: 2016 Update on Industry Consolidation and the State of the Industry.” Smriga showed how the percentage of truly independent dispensing professionals has shrunk, but how these professionals still retain (for the moment anyway) a lot of distribution power. He believes that ADA should encourage the establishment of a group purchasing organization (GPO), so independents can better compete against mass retailers and large chains. In another Friday session titled “Battery Life: Counseling Patients About Their Wireless Streaming Hearing Aids,” Barry Freeman, PhD, took a pragmatic approach to the topic, sharing insights on how ongoing iOS updates and patients’ streaming habits will affect battery life. He provided practical tips for how hearing care professionals can counsel patients in regard to individual needs and expectations around hearing aid batteries. Another well-attended session was presented by Brian Taylor, AuD, who discussed integrating hearables into patient-centric care. Taylor provided a comparison of digitally programmable hearing aids and PSAPs, citing several recent studies that have compared the benefits and limitations of various devices, including a study published in the November 2016 edition of The Hearing Review.

A special session on Saturday, moderated by Randy Baldwin of CareCredit, looked at the customer journey and how to attract consumers, engage patients, and create advocates of the practice. This session featured practical tips from long-time industry experts Tina Soika, Michele Ahlman, and  Kevin St Clergy.

Also on Saturday, a morning session moderated by Hearing Review Editor Karl Strom and Audiology Practices Editor Brian Taylor, AuD, kicked off the first presentation of the ADA Business Plan Competition, which was sponsored by The Hearing Review. Later that day, during the Business Plan Competition Finale, it was announced that CUNY student Jessica Woodson had taken top prize.

Coming in 2017. Next year’s AuDacity 2017 convention will be held September 25-27 at the Mohegan Sun Casino & Resort in Uncasville, Ct. For more information, visit: www.audiology.org 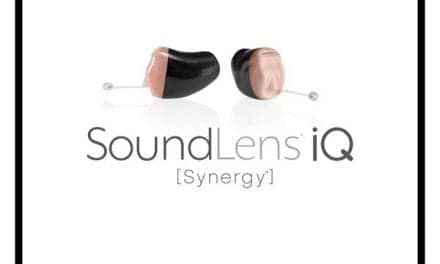 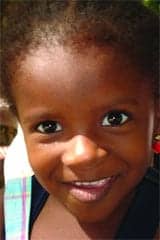 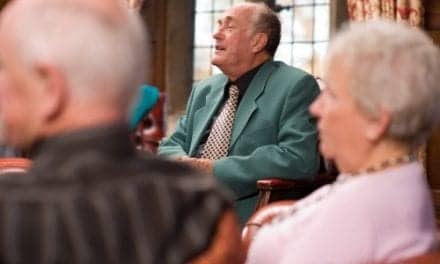