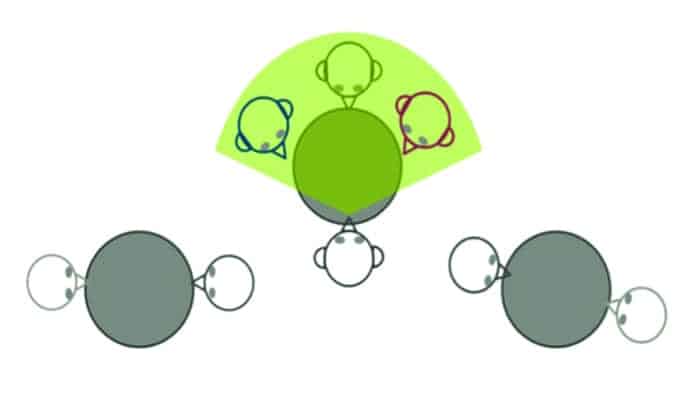 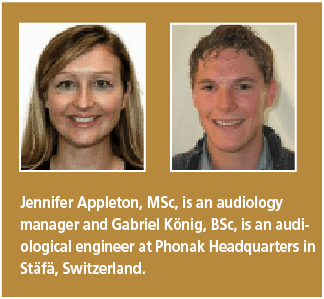 The objective of this study was to investigate the effects of the new adaptive behavior of the Phonak binaural beamformer (StereoZoom) in comparison to both its static behavior and the adaptive monaural beamformer (UltraZoom). The findings indicate that the new adaptive behavior of StereoZoom provides significant benefit, in terms of both speech intelligibility and subjective rating when compared to static or monaural beamformers. This benefit is most evident in difficult listening environments such as when noise is predominantly present from the sides.

Directional microphones improve understanding in difficult listening situations, particularly situations where there is a lot of background noise.1-4 In general, they focus on speech coming from the front while attenuating noise from behind.

[Click on images to enlarge.] Figure 1. An example of a listening situation where UltraZoom has been shown to be of significant benefit. A hearing aid user is listening to the people within the green shaded area. Noise comes from two prominent sound sources (the people sitting at the gray tables).

The adaptive beamformer, UltraZoom, has been shown to improve speech understanding in situations where there is a prominent source of background noise.5,6 A typical example of this situation can be seen in Figure 1, which shows a hearing aid user (head in the center of the picture) listening to three other people within the green shaded area. Noise comes from two prominent directions (the people seated at the two gray round tables). A beamformer does not create a narrow beam in one specific direction, but adaptively attenuates the prominent noise from the rear while retaining gain from the frontal area. So it is possible to have a conversation with people within one’s individual field, even if they are not talking directly from the front. 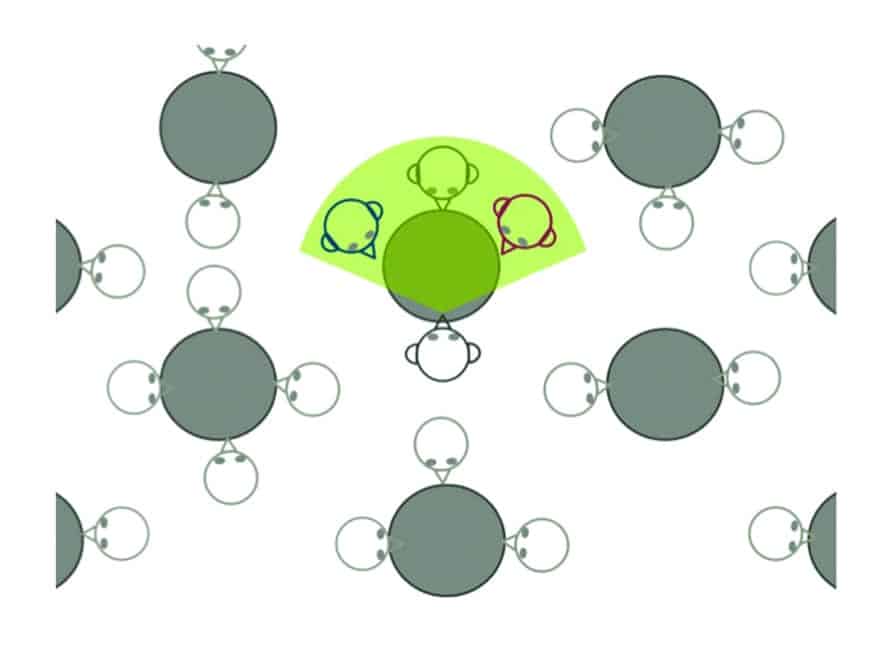 Figure 2. An example of a listening situation where StereoZoom has shown to be of significant benefit. The hearing aid user is listening to people within the green shaded area. He is surrounded by noise sources from several different directions, which creates a diffuse noise environment.

On the other hand, the binaural beamformer, StereoZoom, has been shown to provide directional benefit in situations where the noise environment is diffuse.7-10 A typical example of this situation can be seen in Figure 2, which shows a hearing aid wearer (head in the center of the picture) having a conversation with three other people within the green shaded area. Noise is coming from many directions, which creates a diffuse noise environment.

StereoZoom works by creating a bidirectional network of four microphones, which produces a strongly focused directional effect. This enhanced directional characteristic, which provides a considerably improved attenuation of noise energy, produces a very narrow focus of ±45° and the potential for an improved signal-to-noise ratio (SNR).

A total of 20 subjects with hearing losses ranging from mild-moderate to moderate-severe were included in the study. They were fitted with Phonak behind-the-ear (BTE) or receiver-in-the-canal (RIC) hearing aids according to their hearing loss. Appropriate hearing aid coupling was chosen, including open fittings where indicated. Hearing aids were programmed according to the first fit and coupling data. Programs were set up with the following beamformer settings:

Subjective assessment was carried out using the same set-up as for the OLSA in Figure 3. However, the speech material presented was a male voice signal taken from the Phonak CD (iPFG Sound CD2). The cafeteria babble noise was present either as diffuse noise or from two prominent directions. A fixed negative SNR was used to represent a demanding listening situation. This time, subjects were required to rate the three programs with directional microphone technologies in terms of speech intelligibility, suppression of interferers, and overall quality. The rating was on a scale of 0-100 (0 being very poor, 100 being very good). Subjects could select the programs (blinded) via a touchscreen, which was connected to a software that steered the hearing aid programs. Thus the subjects could compare and rate the programs simultaneously in the respective scene.

The directional benefit of the different beamformers was calculated using the following formula: SRTomni – SRTBF. In other words, the SRT obtained by using either P2, P3, or P4 was subtracted from the SRT obtained when using P1 (omnidirectional microphone mode only). 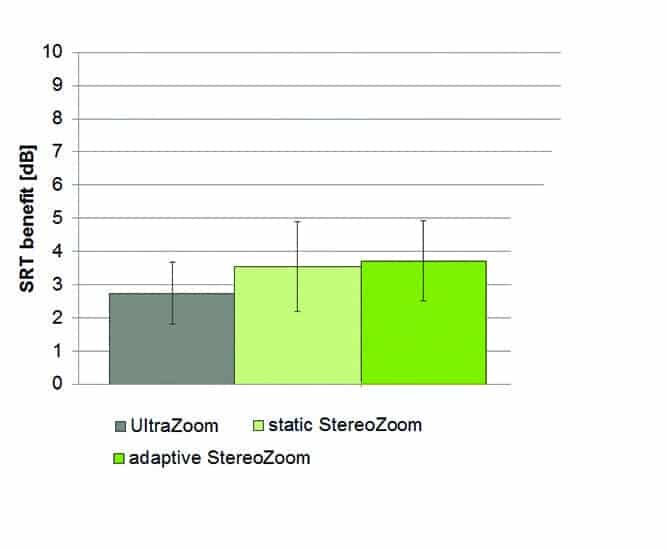 Figure 5. SRT benefit of the beamformers UltraZoom (grey), static StereoZoom (light green), and adaptive StereoZoom (dark green) when noise was presented from the sides only (Version 2). 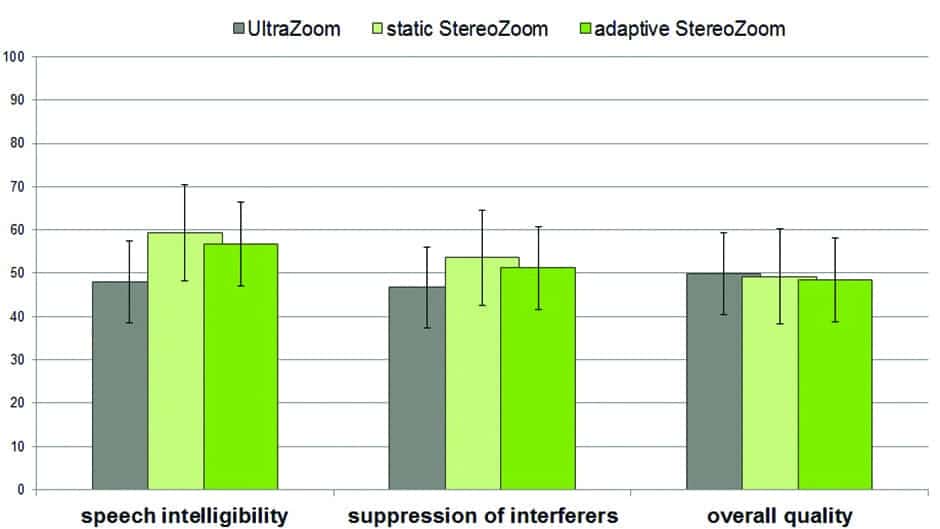 Figure 6. Results of subjective rating of UltraZoom (grey), static StereoZoom (light green), and adaptive StereoZoom (dark green) within the diffuse noise environment (Version 1). Rating was on a scale of 0-100 (with 0 being very poor and 100 being very good).

Results of the subjective assessment are shown in Figures 6 and 7. The subjective results are in some respect consistent with the results of the objective OLSA test. For example, for the diffuse noise environment, speech intelligibility and suppression of interferers were rated better for both static and adaptive StereoZoom than for UltraZoom. 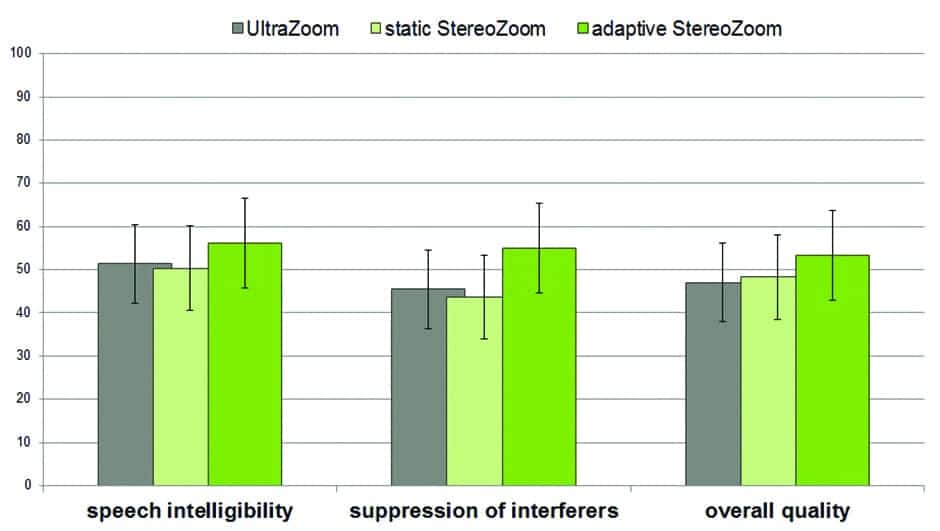 Figure 7. Results of subjective rating of UltraZoom (grey), static StereoZoom (light green), and adaptive StereoZoom (dark green) within the environment where noise is only present from the sides (Version 2). Rating was on a scale of 0-100 (0 being very poor and 100 being very good).

Also consistent with OLSA results, in Version 2 (noise from the sides), adaptive StereoZoom was rated better than static StereoZoom in all three categories. Anova analysis revealed that these observations were of significant difference (p < 0.01).

Both speech intelligibility results and subjective assessment indicate that the new adaptive behavior of StereoZoom provides benefit over the monaural beamformer (UltraZoom) in diffuse noise environments. Furthermore, the new adaptive behavior of StereoZoom additionally provides both objective and subjective benefit over the static binaural beamformer (static StereoZoom) in environments with prominent noise from the sides.

Subjective findings show an additional form of benefit as the evaluation was done in a realistic scenario and the subjects indicated their perceived impression for the various settings. Results indicate that the adaptive behavior of StereoZoom combines the benefit of binaural beamforming, such as in the static form of StereoZoom, with the adaptive steering of the beamformer, such as in UltraZoom.

Generally speaking, the adaptive behavior of StereoZoom has the capability to achieve best performance in both highly diffuse noise scenes and scenes with prominent noise from the rear or even the sides. The performance of this beamformer should help wearers of Phonak hearing aids hear even better in difficult listening situations, particularly when noise is present from the sides only.

CORRESPONDENCE can be addressed to Jennifer Appleton at: [email protected]