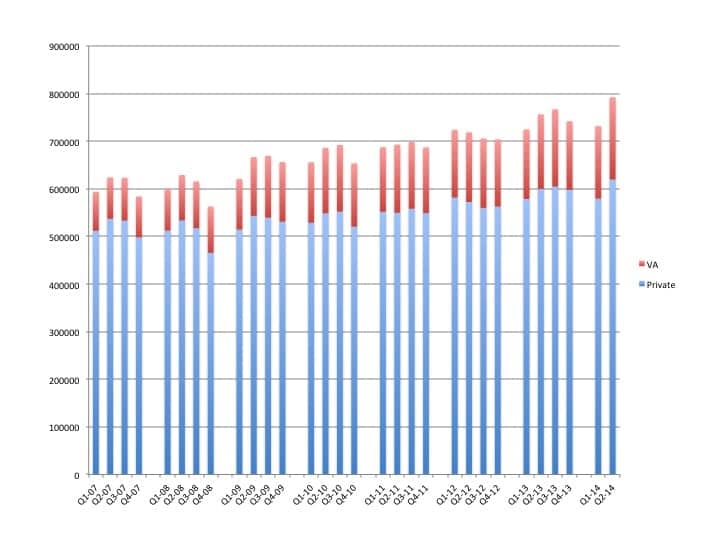 According to statistics compiled by the Hearing Industries Assn (HIA), Washington, DC, second-quarter US net unit hearing aids sales increased by 3.3% for the commercial market and 10.2% for the Department of Veterans Affairs (VA) compared to the same period last year, for a total quarterly increase of 4.75% over Q2 2013. This compares favorably to flat (0.95%) first-quarter sales (0.1% increase for commercial sector; 4.3% for VA). 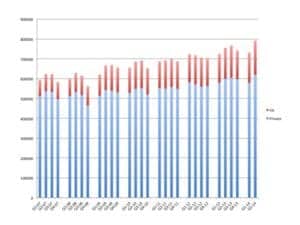 [Click on image to enlarge.] US net unit hearing aid sales increased by 4.75% in the second quarter of 2014, following relatively flat (0.95%) sales in the first quarter, perhaps due to record harsh weather. At mid-year, the hearing instrument market is up 2.9% compared to the same period last year.

Overall, the HIA statistics suggest “average-to-good growth” for an industry with an historical year-on-year sales growth of 2-4%. As noted in The Hearing Review’s Q1 2014 hearing aid sales analysis, very cold weather (and high heating bills) may have dampened unit sales in the first quarter. The 2.9% first-half increase puts the industry on pace to break the 3-million unit mark by year’s end. However, how much of these gains are due to growth in Big Box retail as opposed to private dispensing offices is unknown.

Receiver-in-the-canal (RIC) and receiver-in-the-ear (RITE) style hearing aids continued their upward sales trajectory, increasing from 51.8% to 56.6% of the total market from mid-year 2013 to mid-year 2014 (for more details, read “RICs as a Disruptive Technology” in the June 2014 Hearing Review). A total of 58.6% of all units dispensed by the commercial sector were of the RIC/RITE style, with slightly lower percentages dispensed (49.4%) at the VA.

Behind-the-ear (BTE) devices now constitute over three-quarters (76.9%) of all the hearing aids dispensed in the United States. Similarly, more than 4 out of every 5 (80.8%) hearing aids sold during the first half of 2014 contained wireless technology (76.1% commercial sector; 97.9% VA), according to the HIA statistics.

The commercial return-for-credit (RFC) rates in the first and second quarter were 19.1% and 19.4%, or about a percentage point less than RFC rates during the same quarters last year. 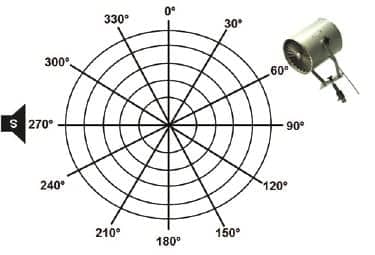 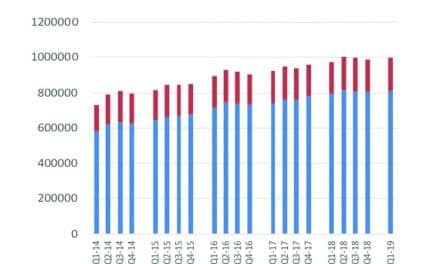 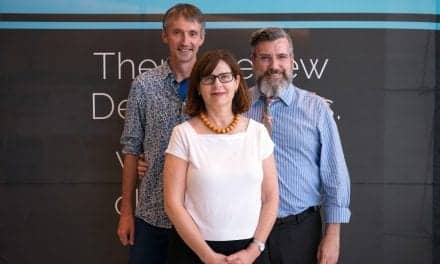