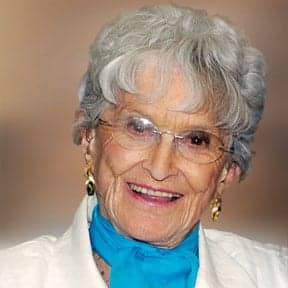 Marion Downs—a legendary figure in audiology who is generally regarded as the “Mother of Pediatric Audiology”—has passed away at age 100.  Downs is widely credited for helping establish the first infant hearing screening program in the United States, the forerunner of the current universal newborn hearing screening (UNHS) program responsible for checking the hearing of some 4 million US newborns each year. She was an adamant proponent of UNHS and fierce advocate for pediatric hearing care in general.

Downs began her audiology career in 1959 at the University of Colorado School of Medicine clinic and, with Doreen Pollack, started fitting hearing aids on infants who were as young as 6 months—a radical concept at a time when most children didn’t receive hearing aids until after age 3. By 1964, Downs was devising observational tests for newborns and had become a proponent of the idea that early hearing detection and intervention led to better outcomes in children with hearing loss. And more than one person found out that—although she had a very sweet demeanor—she was a fierce advocate for kids; Downs armed herself with the facts and the conviction to bring early detection and treatment of hearing loss into the spotlight. (For an excellent overview, see Douglas Beck’s interview with Downs.)

Downs was also a beloved and respected figure throughout the hearing industry. She was smart, funny, kind, and was well known for her encyclopedic knowledge of audiology—along with her seemingly inexhaustible energy. She lived a wildly full and adventurous life. She started her career in audiology relatively late in life, and she certainly made up for the lost time with an energetic approach to everything she did. She was a wonderful speaker, and often put people in stitches with stories like how she chose the field of audiology partly because it was the shortest line at the admissions office. While traveling for our profession, she survived several brushes with death in Vietnam and even a plane crash near Denver. She was an exceptional athlete, tennis player, and skier (into her mid-90s), was blessed with a wonderful loving family, and has a legacy of being a mentor to many audiologists. Her lectures and papers are great testaments to her work, as well as her book, Hearing in Children (now in its 6th edition), written with her long-time friend and colleague, Jerry Northern, PhD, which is one of the most popular and authoritative books in the profession. She also coauthored Auditory Disorders in School Children with Ross Roeser, PhD, another staple in the pediatric audiology literature.

Downs, a professor emerita at the University of Colorado Health Sciences Center, received almost every honor conceivable in the hearing healthcare field, and then some: the Volta Award from AG Bell, the US Health and Human Services Secretary’s Highest Recognition Award, the American Academy of Audiology Foundation’s (AAAF) Legend Award, the International Audiology Society’s Aram Glorig Award, and she was the 1983 Carhart Memorial Lectureship Award Recipient—the highest honor of the American Auditory Society (AAS). The annual Marion Downs Lecture in Pediatric Audiology was established by Oticon in her name in 2004, and of course, the Marion Downs Hearing Center in Aurora, Colo, was named in her honor, as was its foundation.

In January, Dr Northern served as master of ceremonies for her 100th birthday celebration at the Marion Downs Hearing Center Foundation Gala in Denver, and this quote which aptly describes Marion appeared in a blog about the Gala at hearinghealthmatters.com:

Describing himself as her “long-time working partner, co-conspirator, and personal friend,” [Dr Northern,] the former president of the American Academy of Audiology said, “I have been lucky enough to have enjoyed nearly four decades of her buoyant personality and admirable work ethic as well as her many zany antics. Marion, you have been a unique and colorful friend and a positive influence on so many of us. Your attitude toward life is nothing less than contagious.”

Dr Northern concluded, “As she has often said to me, ‘Live for today…plan for tomorrow…but let’s party tonight!’’”

Hers’ was certainly a life to celebrate. We thank Dr Northern for providing us with the news of Marion’s passing.

The Challenge of BTE Hearing Aids with Masks