Green Lights and Speed Bumps: The Road Ahead for Hearing Health Care in 2007

Entering its fifth year of consecutive positive sales, the hearing industry has been on a roll, with new classes of products like open-canal and receiver-in-the-ear (RITE) BTEs, high-fidelity broadband and binaural integration devicees, and new adaptive directionality systems coming into the marketplace. Additionally, with the exception of premium products, the prices for most classes and styles of hearing aids have been static or going down in the last 2 years.1

According to statistics generated by the Hearing Industries Association (HIA),2 hearing aid sales in the United States have followed something of an up-and-down pattern of positive growth during the last 4 years (Figure 1). In 2006, hearing instrument net unit volume sales increased by 7.8% to 2.37 million units, following a modest increase of 2.5% in 2005, a strong year of 7.5% growth in 2004, and a smaller increase of 4.9% in 2003. Perhaps the best news is that this makes 4 years of fairly solid growth; prior to 2003, the industry experienced 4 years of very flat (-1.3% to 2.0%) sales. Another reason to look on the bright side is that hearing aid sales have exceeded a half-million units in every quarter for three and a half years.

VA hearing instrument dispensing activity rose by 5.5% in 2006 to 316,382 units, or 13.3% of the market. Always an innovator and bellwether for the dispensing field, the VA initiated a new series of national contracts with manufacturers in 2006 that includes cochlear implants and assistive devices (TV amplifiers, FM, amplified telephones, TTY/VCO, etc). The VA maintains 157 audiology health care clinics, employing 630 audiologists and 134 health care technicians, as well as other personnel in audiology and speech-language pathology.

Sales flat in first quarter of 2007. First-quarter sales of hearing instruments this year increased by only 1.1% to 593,860 units, with VA sales increasing by 8.8% and private sector sales actually decreasing slightly by 0.1%. But the numbers are certainly nothing to panic over. Last year’s strong first quarter—a 10.7% overall increase with a 12.7% increase in the private sector—is largely to blame. However, if one looks at the up-and-down nature of the last 4 years of positive industry growth, the safe bet would be to lay odds on a more modest growth rate (2% to 5%) for 2007 sales.

Not all areas of the United States fared equally in 2006 (Table 1), according to HIA statistics.2 Generally speaking, the southern and western states experienced better-than-average sales, and this can be seen as a more general trend over the past 10 years of hearing aid sales—perhaps bolstered by the faster-growing populations of these Sunbelt areas.

Sales in 2006. Referring to Table 1, the regions with the greatest hearing aid unit gains during 2006 were the South Central and Southwest regions, with 16.1% and 10.1% increases in unit volume, respectively. The Midwest (9.4%), South Atlantic (9.1%), and Pacific Northwest (8.5%) experienced unit volume increases that were slightly higher than the national average of 8.0% in this analysis, while the East South Central (6.0%), Mid-Atlantic (4.6%), New England (4.5%), and Great Lakes (3.9%) regions posted more modest unit volume increases.

No region experienced negative sales growth in 2006; in fact, only three states (Maine, Delaware, and Alaska) and the District of Columbia saw hearing aid sales decrease by more than 1% last year.

Long-term sales growth. When looking at 3-year, 5-year, and 10-year hearing instrument sales statistics for the nine regions, it’s the southern and western states that clearly come out on top. Leading all regions in 10-year growth are the East South Central (50.5% hearing aid unit volume growth), South Central (49.4%), Pacific Northwest (45.1%), and Southwest (38.6%). Due to Florida’s surprisingly low growth in sales during the last decade (15.7%), the South Atlantic region has a 10-year growth rate that roughly parallels the US average of 31.1%; however, without Florida, these states have a growth rate that equals the South Central region (49.4%).

South Atlantic. All states in this region—except Florida, West Virginia, and Maryland—have been experiencing fast and consistent hearing aid unit sales growth (Figure 4), and this region is the third-fastest growing in this analysis. North Carolina, South Carolina, and Georgia have 10-year growth rates that top 61%, roughly double the national average. Additionally, North and South Carolina had 2006 unit increases of 12.2% and 15.1%. Virginia has also experienced exceptional growth, although the last 2 years have seen slower sales increases, whereas Maryland has had better sales in the last 3 years after suffering a sales decline in 2000 to 2002. The largest of the dispensing regions in this survey, the South Atlantic makes up 18.8% of the hearing aids dispensed by the private sector.

Mid-Atlantic and New England. Arguably no region has suffered through tougher times in the last 10 years relative to hearing aid sales than the Mid-Atlantic (Figure 5). Punctuated by steep sales losses in 1999 to 2002—including a 24.8% decline in Pennsylvania’s hearing aid sales in 2002—these three key dispensing states, which make up 12.8% of the nation’s sales, are only now beginning to reapproach or exceed their hearing aid unit levels of the late ‘90s.

In New England, better-than-average unit gains in Connecticut (41.1% growth over 10 years) and New Hampshire (75.3%) have helped buffer what might otherwise be considered similar sluggish unit volume growth (Figure 6). However, some of the lowest long-term hearing aid sales growth rates in the country belong to New England, including the smaller population states of Vermont (10.2% growth in last decade), Rhode Island (13.4%), and Maine (14.8%). Massachusetts, the largest dispensing state in the region, has a 10-year unit growth rate of 23.2%.

Great Lakes and North Central/Midwest. Ten-year hearing aid sales growth statistics for the Great Lakes’ three largest dispensing states of Michigan (26.1%), Ohio (19.6%), and Illinois (18.9%) are considerably lower than the national average of 31.1% (Figure 7). Indiana has experienced above-average (35.8%) 10-year sales growth, although the last 5 years have seen flat sales. Wisconsin has done very well in the last 5 years, experiencing a 40.7% gain in unit volume, although its 10-year growth statistics (29.7%) are just below the US norm.

The North Central/Midwest region (Figure 8), like the Great Lakes, has seen lukewarm hearing aid unit sales growth in recent years. The small population states of North and South Dakota have experienced the largest hearing aid unit volume increases in the region (33.0% and 49.4%, respectively) since 1996. Kansas has seen unit sales grow by 32.1% over the last decade, while Minnesota (19.9%), Iowa (22.0%), and Nebraska (25.4%) have seen below-average unit volume growth. Missouri has experienced only a 15.1% increase in hearing aids sales since 2006.

South Central and East South Central. These are the two fastest growing regions in the United States (Figures 9 and 10). The South Central region, dominated by Texas hearing aid sales, grew in unit volume by 49.4% in 10 years. Texas’ sales (see Figure 3) have increased by 54.0% in that time span to replace New York as the third-largest dispensing state in the country (after California and Florida). Louisiana (43.1%), Oklahoma (43.8%), and Arkansas (36.7%) have experienced sales during the last decade that are well above the national average. Last year was very good to most of these states, with Texas (15.5%), Arkansas (26.1%), and Louisiana (21.1%) posting excellent hearing aid unit volume increases.

Southwest and Hawaii. Another southern region experiencing relatively robust growth figures, the Southwest is dominated by California, which has seen unit volumes increase by 35.7% over the last decade (see Figure 3). However, California is just part of the story. The region has been led in hearing aid unit sales growth during the last decade by New Mexico (62.6%), Nevada (54.3%), Hawaii (42.6%), and Arizona (40.3%), as retirees and workers pour into these states.

Pacific Northwest, Mountains, and Alaska. The larger states in this region, Washington and Colorado, have enjoyed a 10-year hearing aid unit volume increase of 47.6% and 40.7%, respectively, while Oregon (29.7%) has experienced sales growth that is just under the national average of 31.1%. Utah has experienced an excellent 69.8% growth rate during the same period, and the smaller dispensing states of Idaho (43.5%), Montana (46.1%), Wyoming (92.8%), and Alaska (62.3%) have all made relatively good sales gains during the last decade.

Perhaps the biggest story in 2004 to 2006 is the renaissance in BTE hearing aids and the popularity of open-fit devices. In 2006, BTE fittings constituted 43.9% of the market (Table 2), after consistently making up only a fifth (18.1% to 19.0%) of all the hearing aids dispensed during the 1980s and 1990s. Starting in 1999, BTE percentages started drifting upward gradually by about 0.5% to 1% annually, probably due to the increasing use of directional hearing instruments, which arguably favor BTEs. By 2004, BTE market share had increased to 26.4%, and to 32.6% by 2005. In these more recent years, vastly better cosmetic options in thin tubing, as well as the entrance of the Sebotek PAC and open canal devices (ReSoundAir) in 2003 have spurred on BTE usage.

Digital hearing instruments have dominated the market since 2002. They now constitute 91.7% of all hearing aids dispensed in the United States. 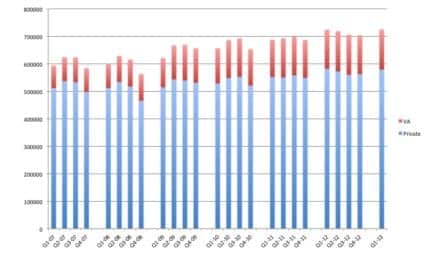 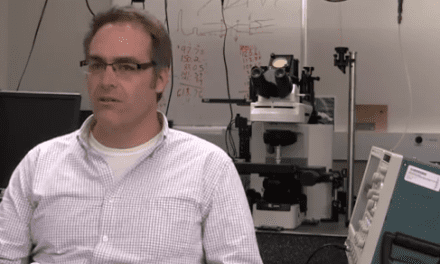