One of the most common and favorite activities for elderly people is watching TV. Indeed, adults 65 years and older watch an average of 6 hours of TV per day.1 A frequent intended use for hearing aids is TV viewing. Although there is plenty of evidence to support C-ISP and other wireless hearing aids offer excellent TV viewing in quiet, the environments in which TV viewing is done—such as the distance between TV and the wearer, room acoustics, reverberation, background noise, etc—can degrade the quality of the TV signal when it reaches the hearing aids. Use of optimal TV viewing devices would ensure excellent sound quality and maximum speech understanding.

There are many products on the market that use wireless transmission media to target TV viewing. Infra-red and Frequency Modulation (FM) schemes have been advocated.2,3 The use of inductive loop and telecoil (t-coil) has received renewed attention in the last few years.4,5 Recently, Bluetooth has been used by several manufacturers to transmit the audio signals from the TV to the wearer’s hearing aids through a combination of short-range and long-range transmission media. These commercial devices vary in their transmission ranges, bit rates (from 120 kbits/s to 300 kbits/s), audio bandwidths (from an upper range of 5000 Hz to 9500 Hz), noise floor, and transmission delay (from < 10 ms to 150 ms). This could potentially affect the sound quality of the transmitted audio signals and their ease of understanding.

Recently, Widex introduced its digital wireless CLEAR hearing aids along with a collection of accessories that enable long- and short-range transmission of audio data.6,7 The collection of assistive devices, called DEX, allows a robust method of transmitting audio data with extremely high quality. These devices are constructed not only to have exceptional sound quality, but also to be functional and easy to use through incorporation of the Widex Ease design concept.8

The assistive listening device intended for TV viewing (and other stereo devices) is called the TV-DEX that allows transmission of audio data from the TV (and other audio devices such as a stereo player, MP3, etc) to the CLEAR hearing aids in a stereo manner. The system includes a base station that accepts direct line input from the TV and one additional audio player, such as a stereo. It wirelessly transmits that input to the controller, which is placed within 1 meter from the wearer’s hearing aids when in use. When not in use, the controller can be inserted back into the base station to be recharged. 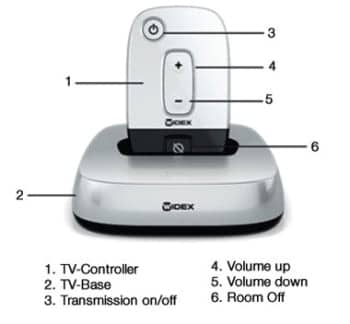 An important distinction of the TV-DEX (from many commercial TV viewing devices) is that Bluetooth is not used. Instead, a high-frequency carrier (2.4 GHz) is used to carry the TV signal in a stereo format at 212 kbit/s. This has the advantage of a lower current drain and a much smaller delay.6 The TV-DEX has the broadest transmission bandwidth on the market today from 100 Hz to 11.2 kHz. It allows reproduction of the richest and the clearest sound quality possible. From a speech intelligibility perspective, it could potentially facilitate better transmission of high frequency speech sounds (eg, fricatives) than a transmission system that has a narrower bandwidth.

To ensure excellent sound quality of the TV signals and perfect synchrony between the visual and auditory signals, “Echo-Free” technology is utilized to achieve a delay of less than 5 ms. To extend the battery life of the TV-DEX, Eco-Tech III technology is used so one charge lasts for approximately 10 hours of continuous use. This is significantly longer than the commercial TV viewing devices, which typically last only 5 to 6 hours. The current drain on the CLEAR hearing aids when receiving TV signals is approximately 1.5 mA.

This article summarizes the results from two laboratory studies that examine the efficacy of the TV-DEX device. The first compares the sound quality of the system with 5 other common audio transmission devices. The second demonstrates the speech understanding benefits of the device over the unaided, the aided, and use of the system in the Room On and Room Off conditions. 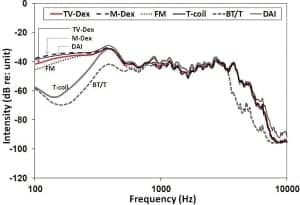 Figure 2 compares the frequency responses of the six technologies. It is clear that the two technologies that use an inductive mechanism (ie, t-coil) have the most restrictive bandwidth while the other four have similar bandwidths. 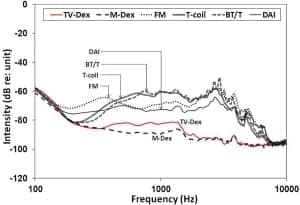 The audio samples were presented to each transmission device from a computer sound card via cable connection, except in one case (“BT/T” system) where an external Bluetooth transmitter was needed to transmit the sound to the Bluetooth-enabled transmission device. The output of each transmission device is then connected to a pair of the CLEAR440 hearing aids. Each hearing aid was coupled to a 2cc coupler and a StageLine MPA-1002 pre-amp. The output was recorded as sound files with stereo, 48 kHz sampling frequency, and 16-bit resolution (Adobe Audition v1.0). The peak RMS output was equalized to be similar for all six technologies.

Participants compared the sound quality of the audio samples processed through the six transmission technologies in a pairwise, round-robin manner under circumaural headphones (Beyerdynamic DT 770 Pro). A custom computer program was written for presentation of test stimuli and response recording. Participants pressed one of two buttons labeled as “A” and “B” on a touch screen to indicate their preferences. Each pair of processed sound samples was allowed to be played as many times as necessary. The test comprised 150 pairs and took about 1 hour 15 minutes to complete.

Table 1 lists the transmission technologies in their order of subjective preference. It is noteworthy that the TV-DEX has the highest subjective sound quality preference. A similar conclusion is reached for both speech and music stimuli. 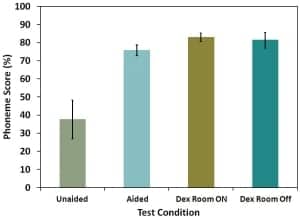 This study shows that the sound quality of speech and music stimuli transmitted through various forms of transmission technologies differed significantly. In general, the strongest preference was seen for the TV-DEX (which is a wireless connection), followed by the direct audio input (a wired connection), the M-DEX, the FM, the t-coil, and lastly the Bluetooth/t-coil options. It is also noteworthy that the sound quality yielded by the TV-DEX is as good as, if not better than, that yielded by the DAI. The DAI, being a passive conduit for audio signals, should have the broadest bandwidth and the least amount of distortion and interference.

Possible reasons for the TV-DEX preference over other systems might include:

Broader Bandwidth. Because the TV-DEX and the M-DEX sample the audio files with a 25 kHz sampling frequency, they have a transmission bandwidth of 11.2 kHz. This means that high frequency information could be better preserved by these devices. On the other hand, the two inductive systems that use the t-coil on the hearing aid have the most restrictive bandwidth, which may partly account for the low subjective preference. 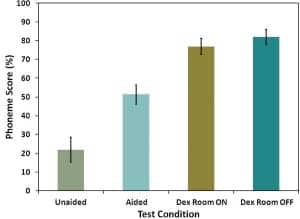 Figure 5. Percent correct for all phonemes obtained at 68 dB SPL in noise at a 0 dB SNR for different test conditions. Standard error bars are included.

Preservation of dynamic range. The TV-DEX and M-DEX are rated more highly than the FM. This may be due to the restricted dynamic range of the FM system, which has an input compression limiter around 70-75 dB SPL. This means input going into the FM would be limited by its dynamic range and reduce sound quality. Along the same line, the stereo transmission in the TV-DEX may be more preferred over the mono transmission of the M-DEX.

A total of 10 experienced adult hearing aid wearers with a bilaterally symmetrical mild-to-moderately severe sloping hearing loss participated. These participants were fitted binaurally with the CLEAR 440-9 hearing aids coupled to instant fit foam tips earmolds using the default gain and feature settings. The TV-DEX controller was placed around the neck of the participants and the base station was placed on top of the speaker at 0° and 3 m (about 10 feet) away from the participants. 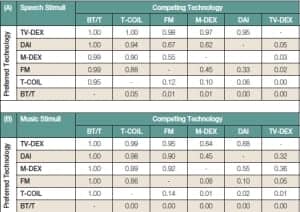 Table 1. The probability of preference between any two transmission technologies based on the BTL model. Technologies in the column are the preferred ones and those in a row are the competing technologies.

Figure 4 shows the averaged phoneme scores on the ORCA-NST obtained at 68 dB SPL in quiet measured across the four test conditions. The averaged phoneme score in the unaided condition was 38%. It was 76% in the aided condition, 83% in the DEX Room On condition, and 81% in the DEX Room Off condition. Performance in the Room On and Room Off conditions was better than the Aided condition by 7% and 5%, respectively. This suggests that the performance of the CLEAR hearing aids closely matches that of the DEX wireless transmission in a quiet, albeit reverberant classroom. One-way repeated-measures ANOVA showed that the effect of test condition was significant [F(3,27) = 20.37, p = 0.001, ŋ2 = 0.69]. 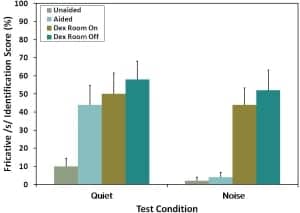 Figure 6. Identification scores for /s/ obtained at 68 dB SPL in quiet (left) and in noise (right) for different test conditions.

We examined the effect of amplification (and of the TV-DEX) on the identification of different phonemes to identify those that may be especially affected by the various test conditions. Of the 25 consonant phonemes on the ORCA-NST, the /s/ phoneme was seen to have been affected most. Figure 6 shows the identification performance of /s/ in quiet (left) and in noise (right) for the unaided, aided, and TV-DEX with Room On and Room Off conditions. In a quiet condition, the CLEAR440 improved the /s/ identification from 10% to 43%. It was 50% in the Room On condition and 57% in the Room Off condition. The TV-DEX improved /s/ perception during TV viewing over the aided condition; however, the differences among the aided, Room On, and Room Off conditions were not statistically significant (p > 0.05).

It is easily seen that the impact of noise affected the identification of /s/ greatly. The aided /s/ score was close to the unaided /s/score (3% and 2%, respectively). The use of the TV-DEX significantly improved the identification of /s/ over the unaided and aided conditions. It was 43% in the Room On condition and 52% in the Room Off condition. This suggests that the /s/ phoneme is especially vulnerable to the impact of noise. This demonstrates that the use of the TV-DEX, and especially in the Room Off condition, preserves the audibility of the especially vulnerable phonemes such as /s/.

It is noteworthy that the TV-DEX preserves the intelligibility of the /s/ phoneme in a noise background as if the test condition is a quiet one. This highlights:

The results of this study demonstrate that the wireless streamer (TV-DEX) yields a significantly better sound quality than many other forms of transmission technologies. It also shows that it improves speech understanding during TV viewing in a noisy and/or reverberant environment. It is worthy to note that, when in noise, the intelligibility of the /s/ phoneme was retained when using the TV-DEX in both the Room-On and Room-Off conditions (vs the unaided and aided conditions). These findings validate the design intent of the TV-DEX and serve as evidence of its value during TV viewing in both quiet and noise environments.

This study also demonstrates that the sound quality of various transmission devices varies dramatically. The subjective preference would also likely affect the ease of speech understanding with these devices because of their different bandwidths, noise floor, and restriction on input dynamics. It is important that these factors are considered in selecting the best TV device. 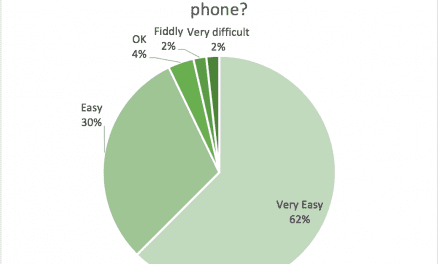 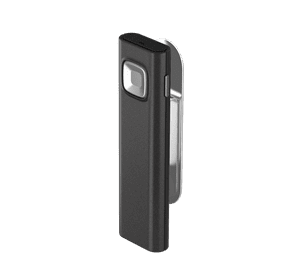