Hearing care professionals should have at least a basic understanding of migraine and its audiovestibular symptoms. Vertigo, tinnitus, photophobia, and phonophobia—and occasionally hearing loss—may be present in at least 30% of migraine patients. This article, the second in a 3-part series, presents information about Mal de Debarquement syndrome (MDD, also known as disembarkment sickness) and presents a case study of a patient who was relieved of MDD symptoms.

This is the second article in a 3-part series on migraine and associated audiovestibular symptoms. The first article (see the September 2002 HR) provides a description and classification of migraine, as well as a review of some of the common migraine symptom triggers.

The following discusses Mal de Debarquement (MDD) syndrome which, in a prolonged state, may be associated or seen in greater prevalence in those who suffer from migraines (migraineurs). MDD syndrome is particularly interesting because, although fairly rare, it can elicit a number of audiovestibular symptoms that hearing care professionals should be aware of.

What is Mal de Debarquement?
Mal de Debarquement, or disembarkment sickness, is actually a common and normal occurrence.1 It can best be defined as the continued sensation of motion, rocking, or swaying that persists after returning to a stable environment following a prolonged exposure to motion. This is commonly encountered on a cruise, car, bus, plane or train ride. It can be related to any form of conveyance.

Most individuals who have enjoyed even a few hours on a fishing boat may have experienced this sensation of still being on the water after returning to shore. This sensation may only last hours, but it can last a few days. It seems to be most noticeable when standing in the shower with your eyes closed, lying in bed, or perhaps leaning against a stable fixture, as when one is washing the dishes at the sink .

The Mal de Debarquement sensation that commonly occurs is independent of any seasickness or motion sickness that may be experienced during the cruise or travel. The individual may not have any ill feelings at all, or only notice the rocking sensation once on solid ground. A survey by Gordon, Spitzer & Donavitch1 found that, of 116 crew-members of the Israeli naval force, 72% reported this common sensation with 67% reporting a very strong sensation following their initial voyage.

Abnormal Mal de Debarquement
In a certain group of individuals, the sensation of disembarkment sickness lingers far beyond the few hours or days usually experienced. It has been reported, and seen in the author’s clinical experience, that a small number of patients suffer for weeks, months, and in extreme cases, even for years from Mal de Debarquement symptoms. Although the majority of these patients are able to function and are not totally incapacitated by this sensation, they often seek otologic or neurologic consultation for these annoying and persistent symptoms. This relatively small group of “dizzy patients” rarely receive benefit from medications typically prescribed for patients with motion sickness or intolerance, such as meclizine, Bonine, and Transderm Scopolamine.

Brown & Baloh2 suggest that this group of patients presents a distinct definable category, clearly differentiated from the majority of dizzy patients on the basis of the history of onset of the symptoms, which is always immediately following prolonged exposure to some form of conveyance. As a group, there is no history of acute-onset vertigo, and no nausea or emesis. Likewise, there are rarely any other otologic symptoms such as tinnitus or hearing loss. Further confounding this group is there is no consistent report in the literature of specifically abnormal patterns on traditional vestibular function tests, including VNG, ENG, rotary chair, or posturography. This often presents a perplexing patient for attending health care providers and physicians.

The Migraine Connection
According to David Zee,3 the etiology of MDD is unclear. He suggests a variety of possibilities, including migraine, psychiatric disorders, fistula, otologic disturbances, and vascular loop. Interestingly, a review of the literature reflects very little writing on the subject of MDD. The patients that are presented in case studies have been almost exclusively female in a pre-menopausal age group.

In fact, virtually all the reported cases are females in their reproductive years. Brown & Baloh2 found five females of six patients, and Murphy4 reported four case studies, all of whom were female. Gans5 has also presented a case study of Mal de Debarquement syndrome with a female patient. Mair6 reported 10 cases, all females ranging in age from 15-66 years.

In an extensive survey conducted through the Vestibular Disorders Association newsletter, Hain, Hanna & Rheinberger7 sought to find the demographics of this interesting group of patients. A group of 26 females and one male responded, with an average respondent age of 49.3 years (range: 35-72 years). The mean length of duration of symptoms was 3.5 years with a range of 1-10 years. In the 12-page questionnaire, the International Headache Society (IHS) criteria for migraine was used. Six of the 26 respondents (26%) met the criteria for migraine. Another eight individuals reported recurrent headaches, but did not meet the IHS criteria for migraineurs. The results clearly showed that MDD occurred in individuals in otherwise good health, with an obvious prevalence of females, and a strong predisposition of migraine.

Just as there is a predominant female-to-male (3-to-1 ratio) in migraines, so it is with migraineurs with MDD. A strong association of individuals with a history of lifelong motion sickness or carsickness as children was also found.

Pathogenesis
Although there is no single explanation for the prolongation of the MDD symptoms in this group of patients, there are several theories as to why the symptoms persist. These include:

1) Possible abnormal perception of linear acceleration, the result of a dysfunction of the otolith system—specifically the utricle;

2) A possible hormonal imbalance having an interaction with the vestibular system and brain, which would explain the greater female prevalence of the condition;

3) The central nervous system’s inability to integrate and adjust to the requirements of a new stable environment;

4) Hain, Hanna & Rheinberger7 suggest that, because of the gender distribution and the late onset of the symptoms, a psychogenic origin was unlikely (however, psychogenic factors cannot be totally dismissed).

Treatment Options
This author and others have recommended and successfully ameliorated MDD symptoms with vestibular rehabilitation therapy (VRT). This application of Vestibular Rehabilitation has shown to be efficacious in this group of patients with modification.

Tusa8 and Zee3 have also found anti-anxiety or depressant medications to be successful in ameliorating symptoms. The basis of vestibular rehabilitation is that the central nervous system has plasticity. It is always preferable (so long as not medically contraindicated) for patients undergoing vestibular rehabilitation therapy to be free of any anti-motion of CNS-based suppressant. In managing this interesting group of patients, it is important to work with the patient and their physician to coordinate their therapy, along with any pharmacology deemed necessary.

Case Study
A 45-year old female presented to The Institute of Balance with a 6-month history of ataxia, phonophobia, photophobia, extreme motion intolerance, visual provocation, and nausea. This occurrence followed a high-speed elevator ride in a skyscraper. The patient reported having three similar occurrences over the past 7 years. The first occurrence, 7 years earlier, followed a 3-day train ride through the Swiss Alps. The rocking and swaying sensations did not resolve for 1.5 years. The second occurrence was 3 years later following a flight on a hydroplane; this time it required only 6 weeks to recover. One year later (approximately 4 years prior to her present complaints), she had what she reported as a “drop attack” following an air flight. This resulted in an immediate recovery.

The patient’s medical history was remarkable for migraine and positional headaches. There had been an earlier concern of a possible CSF leak for which she had been successfully managed. The patient is employed as an accountant and the present symptoms were incapacitating her to the point where she was unable to work full time.

Prior to referral to the clinic, she had had benefit of otologic and neurologic evaluation, as well as MRI with gadolinium, the results of which were unremarkable. She denied any otologic symptoms such as tinnitus, vertigo, otalgia, or hearing loss. However, she did report severe phonophobia. At the time of evaluation, the patient’s phonophobia was so intense that she could not tolerate immittance or audiometry testing. She was able to tolerate the softer tones of distortion product otoacoustic emissions (DPOAEs), which were consistent with intact cochlear outer hair cell function bilaterally. The patient’s difficulty with head movement and focusing her eyes did not allow for a computerized dynamic visual acuity test or vestibular autorotation testing. She was able to tolerate a complete VNG, the results of which were unremarkable.

The patient’s postural stability was grossly abnormal, but the reverse of what would be anticipated from a vestibular patient. Her postural stability on the Gans SOP, which is a combination of Standing Romberg, CTSIB, and Stepping Fukuda Test, revealed better postural stability with dynamic surfaces, irrespective of vision. In essence, her CNS-based sensory integration function seemed to be “trapped” in a dynamic world.

The referring physicians believed she was experiencing a complex form of MDD with a probable psychological component. Vestibular rehabilitation therapy was recommended. The patient was unwilling to take any anti-anxiety medications. Therapy consisted of traditional VRT adaptation-habituation and substitution protocols.

All of her symptoms were almost immediately ameliorated when she was placed into dynamic activities, such as sitting on a balance ball and bouncing, standing on dense foam, or walking on a treadmill. Unlike the traditional vestibular patient whose therapy protocols progress from stable to increasingly dynamic surfaces, this patient’s therapy protocols had to be reversed as she went from the most dynamic to more stable conditions.

The patient was in therapy twice each week for 6 weeks. At time of discharge, she was no longer photophobic or phonophobic, her ataxic gait was recovered, and she was able to drive and return to work full time. She did, however, continue to complain of subtle symptoms and still would sit on her balance ball while at work. Overall, there had been about an 80% reduction in her collective symptoms. She was referred to a therapist to work through any unresolved psychogenic or emotional component.

Summary
The purpose of this discussion of Mal de Debarquement (MDD) is to provide the reader with a better appreciation of this perplexing combination of audiovestibular symptoms. Patients may report a prolonged sensation of rocking, swaying, and movement following travel, in the absence of positive vestibular test findings. The relationship suggested by the increased incidence in female migraineurs and the occurrence of MDD, may assist in appropriate triage and management of the patient. MDD patients have shown to improve with vestibular rehabilitation therapy and pharmacological management. 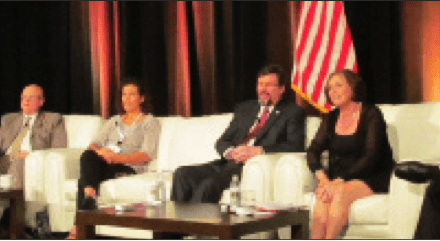