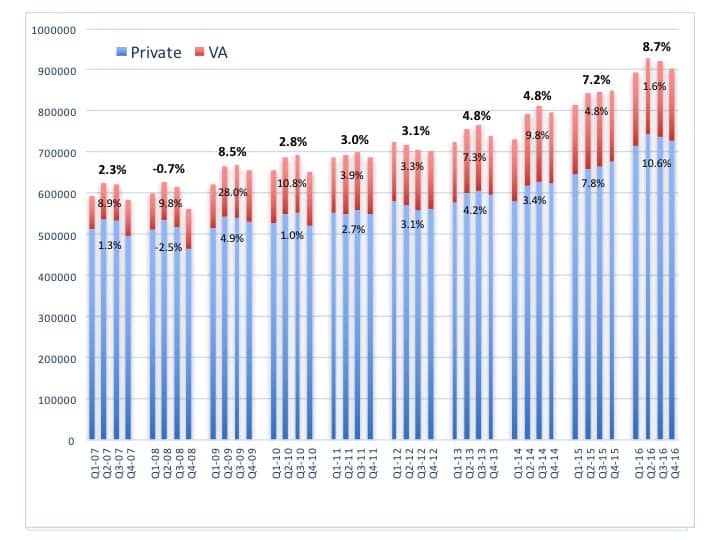 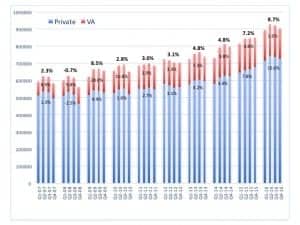 Figure 1. [Click on images to expand.] US net unit sales of hearing aids by quarter (2007-2016), with private/commercial unit sales shown in blue and VA in red. Overall percentage gains/losses for each year are shown in bold at the top. In 2016, US net hearing aid unit gains were 8.7% compared to 2015, while private sector and VA gains were 10.6% and 1.6%, respectively. Source: HIA.

HIA is the trade association representing companies who are generally thought to account for about 90-95% of all the hearing aids sold in the United States, and includes all 6 of the market-leading global hearing aid manufacturers. For the private/commercial sector, which includes independents, retail networks, and Big Box stores (eg, Costco, but excluding WalMart and Sam’s Club), hearing aid unit sales grew by 10.6% in 2016—a strong follow-up to the 7.8% gains experienced in 2015. Fourth quarter sales for the private sector were 7.5% over the same period last year (against a base of 8.25% in Q4 2015). Indeed, 2016 was the second year in which unit sales gains have exceeded 8% since the Great Recession of 2008.

What gains did the average dispensing practice experience in 2016? It should be remembered that unit sales of Costco—the fastest growing segment of the market in the past several years—are included in the HIA figures. There are no available estimates for Costco’s growth; indeed, HR has no reliable figures for the mass distributor’s market growth for at least the last 3 years. Hearing Review estimated that, in 2015, Costco accounted for about 11% of all hearing aid sales. Given what appears to be continued strong growth in the market, and using a 15% growth figure for 2016, we estimate that the retail giant’s sales now constitute about 12% of the total market (Figure 2). 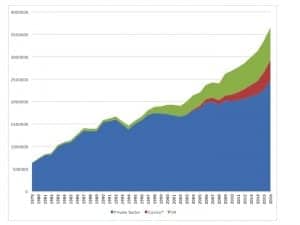 Figure 2. Hearing Review estimates of hearing aid unit growth (1979-2016) of the private/commercial sector (in blue), Costco (red), and the VA (green). HR estimates that Costco now constitutes about 12% of the total US market. The VA makes up 20%. Source: HIA and HR estimates.

Without Costco, private sector hearing aid sales growth increased by 9.8% (vs 10.6% including Costco).

This year, two hearing aid companies with US headquarters in Minneapolis became reporting members to HIA’s statistical marketing program: Hansaton USA and Intricon. Both are established hearing aid manufacturers; Hansaton has is part of the Sonova Group and has traditionally had a strong market presence in Germany, and Intricon is a supplier of hearing aids to many industry firms, most notably UnitedHealth’s hi HealthInnovations. Together, they may have accounted for as much as 3-4% extra percentage points to HIA’s 2016 statistical report.

In terms of market value, we know from the 2016 HR survey and from other reports that average selling prices (ASPs) of hearing aids are going down—probably in the range of 1-3% annually. However, the effects could be slightly less for independents; the HR survey (in which 71% of respondents were independents) indicated that CPI-adjusted average prices increased by 0.9% and 2.0% for mid- and premium-level product lines, respectively, between late 2013 and early-2016, but decreased by 11.6% for the economy lines. Overall, the survey found that ASPs fell by 1.5% during that period.

So, although the unit gains paint a rosy picture of “high times” for dispensing practices, in terms of gross revenues, the “average dispensing practice” is not experiencing the 10.6% unit growth figure reflected in the YE2016 HIA statistical report. Indeed, it would appear that gross revenue increases would be slightly less than half that figure.

Still, the overall market picture does appear to suggest that the aging population of Baby Boomers are starting to make their effects known on the US market. 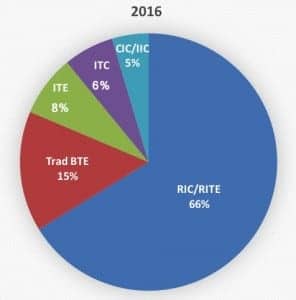 Figure 3. Use of different hearing aid styles by the entire market in 2016. BTEs accounted for 4 in 5 hearing aids dispensed in 2016 when combining receiver-in-the-canal (66%) and traditional BTEs (15%). Source: HIA. 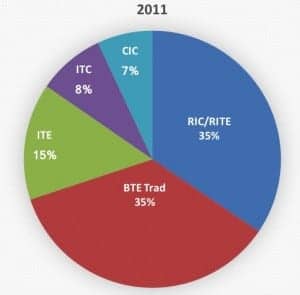 From a historical perspective, this continues a large shift away from traditional ITEs and BTEs in favor of RIC/RITEs. Figure 4 shows that, only 5 years ago (YE2011), RIC/RITE aids and traditional BTEs made up 35% of the market each (70% combined). Meanwhile, ITEs constituted 15% of hearing aids in 2011, while ITCs and CICs made up 8% and 7% respectively. 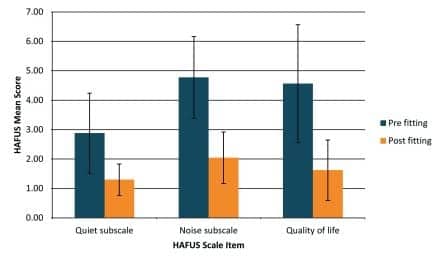 A Perspective on the Indiana University OTC Outcome Study 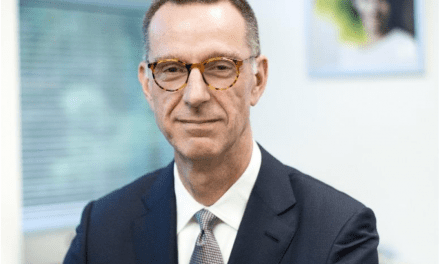