The video Head Impulse Test (vHIT) incorporates a new technology that uses a high speed, lightweight video goggle to measure (left or right) eye velocity and record “catch up” saccades (and other abnormalities) in patients with impaired VOR function. vHIT provides a quick and objective measure of the vestibular ocular reflex (VOR) in response to head movements in the natural range of daily motions.

vHIT results yield immediate information regarding side-specific vestibular function. EyeSeeCam vHIT allows the healthcare professional to efficiently assess the dizzy patient and quickly decide if the dizziness is related to a vestibular disorder.

Head impulse testing (HIT) in various forms using multiple protocols has been available for more than two decades. “In its simplest form, the head impulse test provides fast, reliable, bedside screening of semicircular canal (SCC) function with no equipment needed.”1 Halmagyi and Curthoys1 reported HIT not only demonstrates “catch-up saccades” and other abnormalities in patients with impaired VOR function, it allows a three-dimensional analysis with respect to the three pairs of SCCs, and HIT complements traditional vestibular tests.

Magnetic-field coil systems (aka “search coil techniques”) have previously been used as the “gold standard”2 to measure and record head impulse testing. These systems included 2 or 3 magnets (monocular versus binocular recordings, respectively) worn similar to contact lens(es) to measure eye position in tandem with head position. Search coils are/were technically demanding and difficult to use, are expensive and time-consuming, and slippage (and comfort) rendered them unlikely to be used in day-to-day clinical practice.

MacDougall et al2 recorded video horizontal head impulse test (vHIT) results at 250 Hz and concluded vHIT was successful in detecting overt and covert catch-up saccades in all patient groups evaluated and concluded the vHIT “is equivalent to search coils in identifying peripheral vestibular deficits….” They reported vHIT is easier to use than previous systems, even when working with patients experiencing acute vestibular neuritis.

Weber et al3 reported vHIT results using a camera while recording 250 frames per second mounted on a lightweight spectacle to prevent slippage of the camera relative to the head. They determined corrective saccades (overt and covert) were easily detectable in patients with reduced horizontal canal VOR gain when delivering manually graded head impulses and then objectively analyzing the stimulus-response characteristics of the VOR. vHIT was noted to be easy and practical to apply.

Mossman et al4 reported normative data for horizontal VOR. They reported 60 normal subjects (ages 20 to 80 years) tested with vHIT. The subjects’ heads were rotated rapidly in the horizontal plane. Eye movements were recorded via VOG goggles to quantify eye and head movements and to calculate gain as a ratio of angular eye velocity to angular head velocity. Their results revealed VOR gain measurements were reliable and comparable to the previous search coil method.

Dros et al5 reviewed multiple studies with regard to evaluating dizziness in primary care settings. They combined studies to compare HIT to caloric measurements with regard to diagnosing unilateral vestibular dysfunction. In all, 869 patients were evaluated. Dros and colleagues reported pooled specificity of 93% and pooled sensitivity of 63% (based on a confidence interval of 95%).

The VOR requires equal-but-opposite input from each peripheral vestibular system to keep the eyes fixed on a stationary object while the head is in motion. The vHIT uses infrared cameras to quickly and precisely record and measure the VOR. vHIT provides a reliable, repeatable, documented measure of vestibular function.

A Closer View of vHIT

The Interacoustics EyeSeeCam vHIT (Figure 2) is a portable system that provides quick, efficient, and accurate measurement of the VOR in response to head movement. The hardware consists of EyeSeeCam lightweight, non-slip, dedicated goggles (inset in Figure 2), which permits snap-on changes from left to right eye recordings. An inertial measurement unit (IMU) is included. The IMU is a combined gyroscope and accelerometer that measures head movement while the camera captures and records eye movement (with the switchable mount camera; either eye can be measured and recorded).

The computer interface is a USB connector. Laser calibration is quick and easy and can be performed anywhere. A high-speed camera is incorporated for superior eye tracking.

Immediately after gathering data, velocity regression and gain (at 40, 60, and 80 milliseconds [ms]) is available. Spontaneous nystagmus and easy to visualize “catch-up saccades” are immediately apparent from the graphics.

After placing and securing the goggles on the patient, a brief calibration is performed. The examiner instructs the patient to maintain eye focus on a stationary object while the examiner manipulates the patient’s head with quick, precise head movements. The entire process takes less than 10 minutes to perform and provides immediate, side-specific results.

EyeSeeCam performs repeatable calculations defining the relationship between head and eye movements to determine whether a weakness exists in either vestibular system. These calculations are represented as “tracings,” which clearly show the presence of overt and/or covert saccades. Instantaneous gain is measured at 40, 60, and 80 ms and an analysis of velocity regression—a calculation derived from comparing eye and head velocity between 0 and 100 ms post-impulse onset to quickly estimate symmetry between vestibular systems—is provided.

Illustration of normative data. Figure 3 is a graphical representation from a patient with a normal VOR response. Note the eye movements, shown in dark black, are 180° out of phase with the head movements, which are shown in gray. The gains are nicely centered around 1.0 and the velocity regression shows only a 4% asymmetry.

For patients with normal vestibular function, as the head moves left to right (or right to left), the eye moves in the opposite direction to maintain gaze on a fixed point in space. For patients with vestibular dysfunction, the eye (often) moves in tandem with the head requiring a corrective movement (back to the target) called a “catch-up saccade.” vHIT captures this abnormal eye movement, analyzes it, and displays it on a digital graph, which is easily read and understood.

Illustration of abnormal data. A graphical representation from a patient with an abnormal VOR response is shown in Figure 4. Note the presence of the covert saccades in the left impulses indicating a central compensation to overcome the low gain. The gain for the right impulses is within the normal range and the left impulses show a reduced gain around 0.35. The velocity regression shows a 52% asymmetry on the left side.

Table 1 compares vHIT to the other primary vestibular testing technologies. The EyeSeeCam Video Head Impulse Testing (vHIT) by Interacoustics offers a lightweight, accurate, and objective method to record the VOR from the left or right eye. Using this technology, “catch-up saccades” (and other abnormalities) in patients with impaired vestibular function become apparent.

The vHIT is not meant to replace any of the tests in the current vestibular test battery. Rather, the vHIT serves as a complementary test, which adds realistic high frequency analysis to vestibular assessment and evaluation. 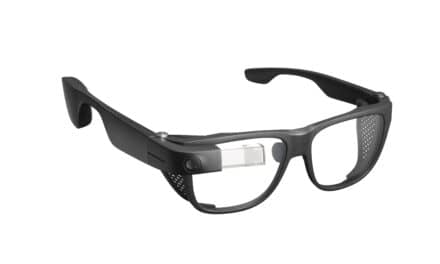