Scientists thought they had a good model to explain how the inner ear translates vibrations in the air into sounds heard by the brain. Now, based on new research from the Stanford University School of Medicine, Stanford,
Calif, it looks like parts of the model are wrong.

Anthony Ricci, PhD, associate professor of otolaryngology, and colleagues at the University of Wisconsin and the Pellegrin Hospital in France found that the ion channels responsible for hearing aren’t located where scientists previously thought. The discovery turns old theories upside down, and it could have major implications for the prevention and treatment of hearing loss.

“I had thought that the channels were in a very different place,” says Peter Gillespie, PhD, professor of otolaryngology at Oregon Health and Science University, who was not involved with the study. “This changes how we look at all sorts of previous data.” The findings will appear in the May issue of Nature Neuroscience.

“Location is important, because our entire theory of how sound activates these channels depends on it," Ricci says. "Now we have to re-evaluate the model that we’ve been showing in textbooks for the last 30 years.”

Deep inside the ear, specialized cells called “hair cells” sense vibrations in the air. The cells contain tiny clumps of hairlike projections, known as stereocilia, which are arranged in rows by height. Sound vibrations cause the stereocilia to bend slightly, and scientists think the movement opens small pores, called ion channels. As positively charged ions rush into the hair cell, mechanical vibrations are converted into an electrochemical signal that the brain interprets as sound.

But after years of searching, scientists still haven’t identified the ion channels responsible for this process. To pinpoint the channels’ location, Ricci and colleagues squirted rat stereocilia with a tiny water jet. As pressure from the water bent the stereocilia, calcium flooded into the hair cells. The researchers used ultrafast, high-resolution imaging to record exactly where calcium first entered the cells. Each point of entry marked an ion channel.

The results were surprising: Instead of being on the tallest rows of stereocilia, like scientists previously thought, Ricci’s team found ion channels only on the middle and shortest rows.

Ion channels on hair cells not only convert mechanical vibrations into signals for the brain, but they also help protect the ear against sounds that are too loud. Through a process called adaptation, the ear adjusts the sensitivity of its ion channels to match the noise level in the environment. Most people are already familiar with this phenomenon, Ricci said, though they might not realize it. “If you watch TV in bed and you have the sound turned down low, you can hear fine when you’re going to sleep,” he says. “But then when you get up in the morning and turn on the news, you have to turn the volume up.”

That’s because at night, when everything is quiet, the ear turns up its amplifier to hear softer sounds. “But when you get up in the morning,” Ricci says, “and the kids are running around and the dog is barking, the ear has to reset its sensitivity so you can hear in noisier conditions without hurting your ear.”

Defects in the ear’s adaptation process put people at risk for both age-related and noise-related hearing loss. Understanding adaptation is a fundamental step in preventing hearing loss, says Robert Jackler, MD, the Edward C. and Amy H. Sewall Professor in Otorhinolaryngology at Stanford.

“Many forms of hearing loss and deafness are due to disturbances in the molecular biology of the hair cell,” says Jackler, who was not involved in the study. “When you understand the nuts and bolts of how the hair cell works, you can understand how it goes wrong and can set about learning how to fix it.”

The study was funded by grants from the National Institute on Deafness and Other Communicative Disorders. Other scientists have attempted similar experiments in the past, but they used less-sensitive imaging techniques. “Our microscope took images at 500 frames per second,” says Ricci, who led the imaging experiments. “That’s much faster than it’s ever been done before.”

Ricci and colleagues also used hair cells from rats, while previous experiments had been done in bullfrogs. Because mammals have fewer, more widely spaced rows of stereocilia, the team was able to determine the precise location of the ion channels.

“They chose their experimental preparation quite wisely,” Gillespie says. “The ear is really hard to get at because it’s a tiny organ, it’s encased in very hard bone and there are very few hair cells.”

Ricci’s study wasn’t just a triumph in experimental protocol. Millions of Americans suffer from hearing loss and deafness, and until scientists understand the molecular basis of normal hearing, it’s difficult to understand what can go wrong. “We need to know specifically how hearing works,” Ricci says, “or we can’t come up with better treatments.” 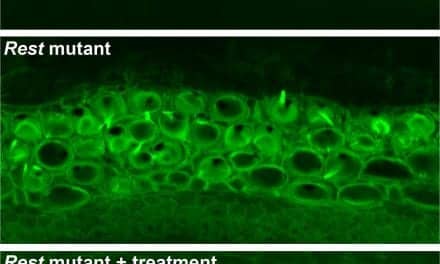