Huawei Australia announced the launch of StorySign, an AI-powered app that is said to help enrich storytime for deaf and hard-of- hearing children and their parents, according to a press release posted by Deaf Australia, the deaf advocacy organization that partnered with Huawei on the app’s development. StorySign uses Huawei’s AI (Artifical Intelligence) to create what’s said to be an “authentic reading experience,” helping to open the world of books to deaf children and their families.

StorySign will feature the popular children’s book, Where’s Spot at launch. With the help of StorySign’s avatar Star and using the power of Huawei AI, the app translates the feature book into sign language.

“At Huawei, we believe in the power of AI and technology, and how they can make a positive difference in the world,” said Lisa Connors, Huawei Australia corporate responsibility manager. “We created StorySign to help make it possible for families with deaf children to enjoy the truly magical moments of storytime. Created with experts and charities from the deaf community, StorySign was developed to ensure its use as a genuinely useful tool for families with deaf and hard-of-hearing children.”

Huawei Australia has entered a six-month partnership with Deaf Australia to encourage support and donation for those affected. Through this partnership, Huawei will offer the StorySign app to the Australian deaf community and aim to raise awareness of deaf literacy more broadly.

“Deaf children don’t learn to read in the same way as hearing children,” said Kyle Miers, Chief Executive of Deaf Australia. “Many struggle to learn how to read because they can’t match words with sounds. The deaf community is in need of accessible content to address children’s literacy development needs and digital tools like StorySign are addressing this necessity. For this reason, we are privileged to be working with Huawei on the StorySign project and how, through the use of AI and innovative technology, it could enrich the lives of Australian deaf children and their families in a meaningful ways.”

“We are very hopeful that it will make a significant impact in the deaf community, helping more deaf children learn how to read at the same level as hearing children. We also hope the launch of StorySign will support a wider conversation about ensuring equality in every aspect of their lives for deaf people,” said Mark Wheatley, executive director of European Union of the Deaf (EUD).

Created with experts and charities from the deaf community across Europe and Australia, StorySign uses Huawei AI’s Image Recognition and Optical Character Recognition (OCR) to provide greater accuracy even when the child or parent positions the phone at an angle from the book. The AI is said to further optimize the speed at which pages from the book load in the app, meaning that children won’t be left waiting too long to find out what happens next in the story.

StorySign launches in Australia with a film by Academy Award winning director Chris Overton, starring 7-year-old actress Maisie Sly, both of whom worked on the Oscar-winning short film The Silent Child. The StorySign film shows a young girl struggling to read with her father on Christmas Eve. Later that night, when she sneaks downstairs to peek at her presents, she is stunned to see Santa, who hands her a book for a gift. Upon realizing that the little girl is deaf, Santa begin to sign the book and, in that moment, she is the “happiest little girl in the world,” as he helps her enjoy the magic of storytime.

Partners involved in the app development include Deaf Australia, European Union of the Deaf, and its local charities across Western Europe, publishing partner Penguin, and animation specialists Aardman.

“When creating Star, the character for StorySign, we first had to immerse ourselves in the world of sign language,” said Neil Pymer, interactive creative director, Aardman. “The complexity we found is overwhelming, so we needed to make sure that we created a character that not only resonated with the audience but also fulfilled it main job of teaching children to read. For example, we learned that facial expression play a critical role in sign language, so we created a character to embody that expressivity. At the same time, Star was designed to seem like an older sibling, somebody who will guide you through the book. Seeing the reactions of children when realizing that Star signs the words in the book is something very special indeed.”

StorySign can be downloaded for free from Google Play and the Huawei App Gallery in 10 markets across Western Europe. It will be made available in Australia from February 2019 with compatibility with Auslan.

To watch the film and learn how you can help, click here. Donations can be made through the StorySign campaign hub on the Huawei website here. All monies raised will support deaf children literacy projects across Europe and in Australia, including more books for StorySign. 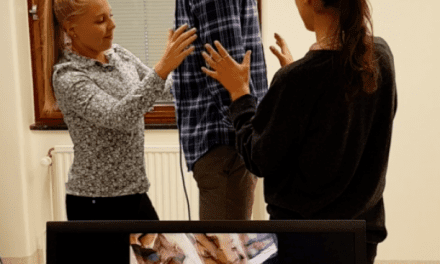