I was about to publish an editorial about the binaural revolution and its impact on hearing care, but then the following came over the wire. This is an excerpt of a May 17 release from the Better Hearing Institute (BHI), Washington, DC.

In preparation for the thousands of anti-war activists expected to protest outside the NATO summit in Chicago this week, the city has reportedly ordered $1 million worth of riot-control equipment including a “sound cannon” that can be used to emit pain-inducing sound waves of up to 150 dB. According to The Guardian, Chicago police have confirmed that a longrange acoustic device, or LRAD, will be on hand at the protests, and that officers intend to use the device “as a means to ensure a consistent message is delivered to large crowds that can be heard over ambient noise.” Sound cannons are being used increasingly across the US and abroad as a method of crowd control.

Sergei Kochkin, PhD, executive director of the Better Hearing Institute (BHI), expressed concern over the use of these devices. For more than 40 years, the BHI has promoted better hearing and hearing conservation. Exposure to noise is one of the key sources of hearing loss. The LRAD’s power lies in its ability to emit sound in narrow 30-degree ‘beams’ as if it were traveling through a ‘sound tunnel.’ Set at 150 dB, the sounds can reach a target as much as 1,600 feet away. The human threshold for pain is between 110 and 120 dB. Any exposure to the device at its maximum power could cause irreversible damage to the ears since the sound exceeds that of a jet engine taking off or a gun shot near a person’s ear; in addition it can result in debilitating tinnitus (ringing in the ears).” For reference, see the BHI Noise thermometer at: http://www.betterhearing.org/hearing_loss_prevention/noise_thermometer/index.cfm

There have already been documented cases of irreparable hearing loss caused by exposure to LRAD’s. Karen Piper, a former visiting professor at Carnegie Mellon University who attended the G20 summit in Pittsburgh, sued the city after allegedly sustaining permanent hearing loss when the city used their LRAD. “The intensity of being hit at close range by a high-pitched sound blast designed to deter pirate boats and terrorists at least a quarter mile away is indescribable. The sound vibrates through you and causes pain throughout your body, not only in the ears. I thought I might die,” Piper, now an English professor at the University of Missouri, said in a press release. “It is shocking that the LRAD device is being promoted for use on American citizens and the general public.”

While the BHI understands the need for crowd control we would like to reiterate that numerous studies demonstrate the considerable negative social, psychological, cognitive and health effects of hearing loss. In fact, those who have difficulty hearing can experience such distorted and incomplete communication that it seriously impacts their professional and personal lives, at times leading to isolation and withdrawal. Studies have linked hearing loss to: irritability, negativism and anger; fatigue, tension, stress and depression; avoidance or withdrawal from social situations; social rejection and loneliness; reduced alertness and increased risk to personal safety; impaired memory and ability to learn new tasks; reduced job performance and earning power; diminished psychological and overall health.

I’ve railed numerous times in this column about how public perception on the value of hearing health care is not anywhere close to what it should be. For example, comedians, talk-show hosts, and news anchors routinely make light of people who can’t hear well, but they would never think of making fun of a blind or otherwise physically disabled individual. Toys for kids are manufactured each Christmas that feature shocking noise levels (see the December 2011 HR StaffStandpoint). For the general public, the value of hearing is too often an afterthought. Could you imagine the outcry if a crowd-control device was used that partially or completely blinds people? Why not a device that chops off people’s fingers?

I’m all for law and order. But using a “riot control” device that carries the distinct risk of inflicting permanent hearing loss or deafness on people is plainly wrong. I think it’s incumbent on all members of our profession to say this is going too far. 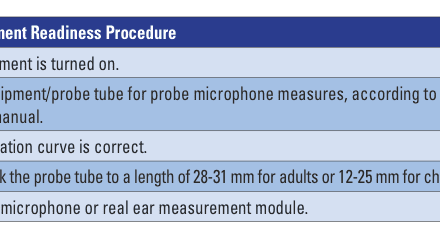