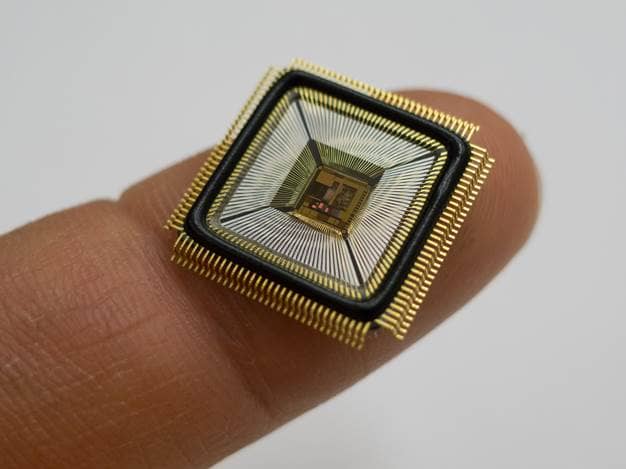 A cochlear implant that can be wirelessly recharged would use the natural microphone of the middle ear rather than a skull-mounted sensor.

Cochlear implants have granted at least limited hearing to hundreds of thousands of people worldwide who otherwise would be totally deaf. Existing versions of the device, however, require that a disk-shaped transmitter about an inch in diameter be affixed to the skull, with a wire snaking down to a joint microphone and power source that looks like an oversized hearing aid around the patient’s ear.

Photo from the researchers of the new, low-power signal processing chip that could lead to a cochlear implant that requires no external hardware.

Researchers at MIT’s Microsystems Technology Laboratory (MTL), together with physicians from Harvard Medical School and the Massachusetts Eye and Ear Infirmary (MEEI), have developed a new, low-power signal-processing chip that could lead to a cochlear implant that requires no external hardware. The implant would be wirelessly recharged and would run for about 8 hours on each charge.

The researchers describe their chip in a paper they’re presenting this week at the International Solid-State Circuits Conference. The paper’s lead author—Marcus Yip, who completed his PhD at MIT last fall—and his colleagues Rui Jin and Nathan Ickes, both in MIT’s Department of Electrical Engineering and Computer Science, will also exhibit a prototype charger that plugs into an ordinary cell phone and can recharge the signal-processing chip in roughly 2 minutes.

“The idea with this design is that you could use a phone, with an adaptor, to charge the cochlear implant, so you don’t have to be plugged in,” says Anantha Chandrakasan, the Joseph F. and Nancy P. Keithley Professor of Electrical Engineering and corresponding author on the new paper. “Or you could imagine a smart pillow, so you charge overnight, and the next day, it just functions.”

Existing cochlear implants use an external microphone to gather sound, but the new implant would instead use the natural microphone of the middle ear, which is almost always intact in cochlear-implant patients.

The researchers’ design exploits the mechanism of a different type of medical device, known as a middle-ear implant. Delicate bones in the middle ear, known as ossicles, convey the vibrations of the eardrum to the cochlea, the small, spiral chamber in the inner ear that converts acoustic signals to electrical. In patients with middle-ear implants, the cochlea is functional, but one of the ossicles—the stapes—doesn’t vibrate with enough force to stimulate the auditory nerve. A middle-ear implant consists of a tiny sensor that detects the ossicles’ vibrations and an actuator that helps drive the stapes accordingly.

The new device would use the same type of sensor, but the signal it generates would travel to a microchip implanted in the ear, which would convert it to an electrical signal and pass it on to an electrode in the cochlea. Lowering the power requirements of the converter chip was the key to dispensing with the skull-mounted hardware.

Chandrakasan’s lab at MTL specializes in low-power chips, and the new converter deploys several of the tricks that the lab has developed over the years, such as tailoring the arrangement of low-power filters and amplifiers to the precise acoustic properties of the incoming signal.

But Chandrakasan and his colleagues also developed a new signal-generating circuit that reduces the chip’s power consumption by an additional 20% to 30%. The key was to specify a new waveform—the basic electrical signal emitted by the chip, which is modulated to encode acoustic information—that is more power-efficient to generate but still stimulates the auditory nerve in the appropriate way.

The waveform was based on prior research involving simulated nerve fibers, but the MIT researchers tailored it for cochlear implants and found a low-power way to implement it in hardware. Two of their collaborators at MEEI—Konstantina Stankovic, an ear surgeon who co-led the study with Chandrakasan, and Don Eddington—tested it on four patients who already had cochlear implants and found that it had no effect on their ability to hear. Working with another collaborator at MEEI, Heidi Nakajima, the researchers have also demonstrated that the chip and sensor are able to pick up and process speech played into the middle ear of a human cadaver.

“It’s very cool,” says Lawrence Lustig, director of the Cochlear Implant Center at the University of California at San Francisco. “There’s a much greater stigma of having a hearing loss than there is of having a visual loss. So people would be very keen on losing the externals for that reason alone. But then there’s also the added functional benefit of not having to take it off when you’re near water or worrying about components getting lost or broken or stolen. So there are some important practical considerations as well.”

Lustig points out that the new cochlear implant would require a more complex surgery than existing implants do. “A current cochlear-implant operation takes an hour, hour and a half,” he says. “My guess is that the first surgeries will take 3 to 4 hours.” But he doubts that that would be much of an obstacle to adoption. “As we get better and better and better, that time will shorten,” he says. “And 3 to 4 hours is still a relatively straightforward operation. I don’t anticipate putting a lot of extra risk into the procedure.” 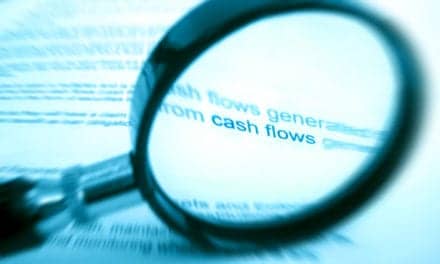 Cash-Flow in Hard Times: Managing a Practice Through Covid-19 and Other Disasters