Quest for the Boomers. Following a year in which hearing instrument unit volume increased by only 2.3%, according to HIA’s own statistical program, talk at the meeting often centered on what steps might be taken to increase the market penetration of hearing instruments above the historical levels of 21% to 23%.

Mary Furlong, EdD, founder of Mary Furlong and Associates, a strategy, business development, marketing, and public relations strategic communications firm based in San Francisco, provided the keynote presentation, titled “Turning Silver into Gold.” Furlong detailed demographic information about the Baby Boomer generation and the marketing opportunities related to them. She half-jokingly referred to two types of Baby Boomers: 1) Those who have bumper stickers advertising the universities that their children attend, and 2) Those who are buying new kitchens and taking exotic vacations as the result of not having to pay for their kids any longer.

Furlong says that the vast Baby Boomer demographic, or the “silver tsunami,” is reshaping society. Because they go through many life stages, one marketing objective is to catch these consumers at the transitions in their lives and in a way that captures their imagination. Effective marketing to Boomers, says Furlong, creates a mosaic of opportunities and a sense of urgency in dealing with the things that matter most to them—family (particularly grandchildren), friends, and finding greater meaning in life as they age.

Additionally, she says that women make 83% of the buying decisions for US households and 69% of health decisions, and 91% of Baby Boomers are Internet-savvy. Thus, marketing messages should be focused on “taking out the clinical and putting in the care,” while centering on digital strategies that tap into social networks and cause/purpose-related agendas that inspire these consumers.

BHI creates wealth of professional resources. Better Hearing Institute (BHI) Executive Director Sergei Kochkin, PhD—author of the Knowles MarkeTrak series and a long-time surveyor of consumer satisfaction with hearing aids—presented what he characterized as “outcome measures” on BHI’s activities during the past year, including its PBS mini-documentary, video news releases, and other press activities related to hearing loss on topics ranging from income levels to child safety issues. In total, according to Kochkin, these press activities resulted in a minimum of 3,000 placements, reaching 215 million people, with advertising worth more than $3.7 million. An integral message in all BHI news items is that hearing loss is not necessarily a sign of aging or disability. “You shouldn’t have to enter into an existential crisis just because you’re getting a hearing aid,” Kochkin says, pointing out that 65% of all the people who have hearing loss are below retirement age.

Kochkin also invited hearing care professionals—represented by the key professional organizations at the conference—to use anything and everything that they find useful on the BHI Web site at www.betterhearing.org. “BHI’s mantra to hearing care professionals is simple: ‘Steal our stuff!’ You don’t even have to mention BHI [as its source],” he says. Web site resources include new PSAs, physician and consumer education materials, an interactive hearing loss simulator, as well as archives of relevant articles ranging from marketing statistics to self-help guides written by some of the most prominent audiologists and medical experts in the field.

In 2008, BHI has enlisted the assistance of former Miss America Deidre Downs to inform the public about children’s hearing health care, assist in public awareness efforts related to Better Hearing and Speech Month in May, as well as attract new celebrity endorsements. As with PR activities in 2007, a number of prominent syndicated columnists will also be accessed. Additionally, the organization will help promote hearing awareness through media and corporate partners, advocate for the Hearing Aid Tax Credit Bill (visit www.hearing.org/public for more information), address tinnitus mitigation, and increase the utility of BHI’s quick hearing check for consumers, which is also available on the BHI Web site.

Hearing care legislation and professional issues. Because so many industry initiatives, including the Hearing Aid Tax Credit bill, are directly affected by Washington politics, the HIA meeting often includes the perspectives of a political analyst. This year, Rich Galen of mullins.com, a cyber-columnist who formerly served as press secretary for Newt Gingrich and as executive director of the Republican political action committee, GOPAC, presented his admittedly conservative perspective on Capitol politics. Galen says that the Republicans are in “desperate straits” in the House of Representatives, but are in better shape in the Senate due to the unlikelihood that Democrats can reach 60 members there (the number needed to break a filibuster).

Lucille Beck, PhD, chief consultant of rehabilitation services and director of audiology and speech pathology at the Department of Veterans Affairs, noted in her presentation that the VA’s use of hearing aids rose by 12% in its fiscal year and now constitutes one in every seven hearing aids dispensed in the United States. She says that hearing loss has been listed in the top three disabilities associated with military service in every US armed conflict since World War II (with the exception of the first Gulf War, probably due to the brevity of that campaign). She also presented data on hearing loss and tinnitus as the result of blast injuries and polytrauma—increasingly frequent in­juries resulting from the highly powerful roadside bombs used by insurgents in Iraq and Afghanistan. 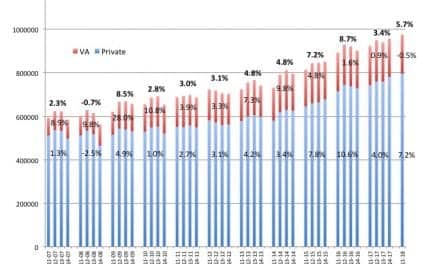 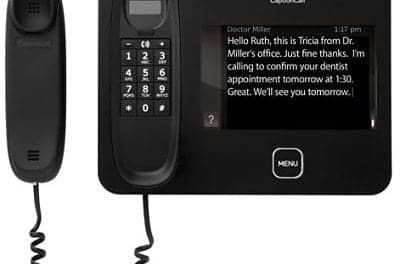 The Phone and Hearing Aids: Why Every Dispenser Needs to Offer Patients a Captioned Telephone Service