Fundamentals of Screening for Mild Cognitive Impairment and/or Dementia 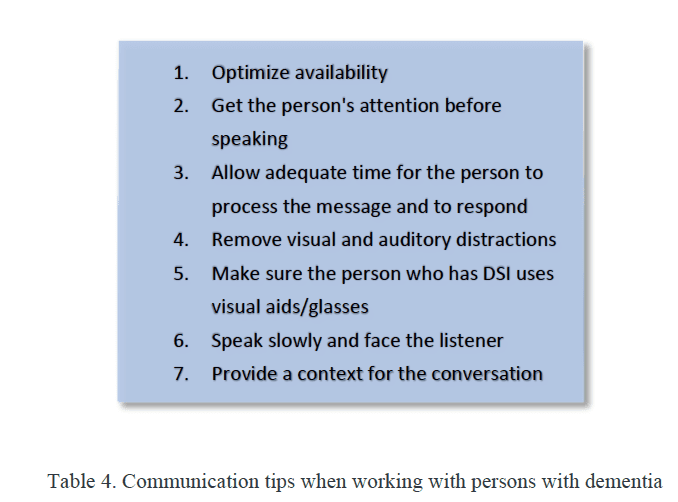 Although life expectancy in the US has declined slightly over the past two years, as compared to the previous century, people are living decades longer. As people live longer, declines in physical, psychosocial, and cognitive well-being are the norm. Optimizing function, maintaining brain health, promoting auditory wellness, and social integration are essential to healthy aging and quality of life. Audiologists play an important role as members of professional multi-disciplinary teams working to help people “age well” despite potential changes in cognitive capacity across multiple functional domains. With a focus on person-centered care (PCC), the conversation surrounding aging has been reframed.

To optimize cognitive health, early detection and management of sensory impairment (such as visual and hearing impairment) is a form of secondary prevention. Social prescribing, including environmental modifications such as quieter work and school spaces with less background noise and reverberation and with better lighting and fewer visual distractions, are a form of tertiary prevention.3 Regarding fall prevention programs, rehabilitative technologies and environmental modifications are forms of secondary and tertiary prevention, respectively, to optimize physical health.1 Forming meaningful relationships, a form of social prescribing, is integral to primary prevention if social integration/engagement is to be maintained once hearing and visual status are optimized. Finally, identifying modifiable risk factors along with early interventions could theoretically delay the onset of and perhaps reduce the economic costs of dementia.3,4

Given the high prevalence of hearing loss/difficulties among persons with mild neuro-cognitive disorder, the large and disproportionate weight attributed to hearing loss as POTENTIALLY the largest modifiable risk factor for dementia onset according to the Lancet Commission report, and the sensory bias inherent in traditional cognitive tests administered orally, hearing health professionals can expect to see an increasing number of persons presenting with typical age-related decline in cognitive capacity, MCI and diagnosed or undiagnosed dementia.

Recently, the connections between cognitive difficulties and hearing status and our professional role as gatekeepers have received considerable attention. Some of the questions being discussed include:

In agreement with the recommendations of the US Preventive Task Force7 and the recommendations from the 5th Canadian Consensus Conference,8 Table 1. I do not endorse cognitive screening of asymptomatic adults to determine the presence of mild cognitive impairment (MCI) or dementia. However, I do believe we should be aware of behaviors associated with MCI and dementia and the relevance of informant-based reports of hearing difficulties. In this article, I will provide a brief discussion of dementia and considerations in screening cognitive status and will conclude with a brief overview of approaches available to audiologists for identifying patients who are either at risk for cognitive decline/dementia or present with mild cognitive impairment or dementia, whether diagnosed or undiagnosed.6,9

Dementia is an umbrella term for a syndrome that includes a wide range of brain changes that can eventuate in one or more behaviors that interfere with a person’s ability to perform activities of daily living (ADL) independently. Dementia is multi-factorial and is highly prevalent. Table 2 provides an overview of behaviors associated with cognitive decline which are distinct from typical age-related changes. The cognitive capacity trajectory ranges from cognitive changes associated with typical aging to mild neurocognitive disorder to cognitive behaviors present in persons with full-on dementia (APA-2013-DSM-5). The distinction between mild cognitive impairment (MCI) and dementia is an important one. In the case of the former, despite poor cognitive performance in one or more of the domains listed in Table 2, the individual can independently perform ADLs with minimal or no assistance. A dementia diagnosis is typically made when the cognitive changes progress to the point that the individual is no longer able to carry out ADLs independently. It is noteworthy that there are different causes of dementia which vary in terms of symptomology/behaviors. Alzheimer’s disease (AD) is the leading cause of dementia and represents perhaps 65% of all dementias. Vascular, frontotemporal, and dementia with Lewy bodies each account for approximately 5-10% of cases. In light of the multifactorial nature of dementia, case detection tools are comprehensive and complex and oftentimes include anatomical neuroimaging, cerebrospinal fluid biomarkers, and functional assessments.8 Neuropsychological tests which assess memory, information processing, communicative capacity, mood, and judgment; behavioral observation; and informant-based reports of changes in cognition, behavior/function; and informant-based reports of hearing difficulties that interfere with ADLs are important parts of the diagnostic process.6,8

Regarding whether cognitive screening is within our scope of practice and with regard to the complexities and ambiguities associated with screening cognitive status, Table 3 serves as a checklist against which to judge readiness to screen for cognitive decline and/or dementia and charge a fee. In contrast to ‘early diagnosis’ which is designed to detect a condition early in people presenting with symptoms, the purpose of screening is to identify people who are at risk or do not yet have recognized symptoms. It is my opinion that, generally speaking, audiologists are not in a position to screen the cognitive status of asymptomatic persons or those not at risk.

Approaches to Screening: Informal vs. Formal

Given the aforementioned rise in life expectancy, the prevalence of hearing loss among persons with dementia, and the prevalence of dementia among persons with severe to profound hearing loss, it is incumbent on us to observe patients for red flags regarding cognitive status, especially among patients who are 70 years of age and older. Our case history should be holistic, with a focus on the whole person, including gaining an understanding of their self-perceived cognitive capacity and social/emotional/physical well-being. Answers to such questions could inform our testing protocols, approaches to counseling, and management and, depending on the responses, could lead to a referral to primary care. The case history should include questions about falls history (persons with dementia are at significant risk for falls) and signs of changes in cognition such as memory changes, forgetting where things are placed, difficulty expressing thoughts and ideas, difficulty understanding speech in noise, and more. Asking patients and their family members if they have concerns about memory, if they have noticed changes in memory, and if they feel that hearing difficulties interfere with ADLs can be informative.6,11

Referral to primary care could be prompted if you observe changes in behavior over time. For example, does the patient.

1. Seem to be asking the same question repeatedly?

2. Mishear/misunderstand what you are asking?

3. Take longer than usual to process incoming information and respond to questions being asked?

5. Have difficulty following directions after you have instructed them how to respond.

As spouses or care partners are often excellent informants, there are several family and informant questionnaires that are of proven reliability and validity, underscoring the import of input from family members to inform testing and rehabilitative protocols and to trigger a referral to primary care. Finally, when we recommend a hearing intervention, we must make sure counseling is informed by lifestyle considerations and any concerns our patients express regarding memory or cognition.11

Several validated rapid psychometric screening tools are used in primary care. The Gerontological Society of America (GSA)11 suggests three key considerations when selecting a cognitive screening test. The time period for administering the screen should be brief; 5-10 minutes is considered ideal. The screening test cost should be minimal, and there should be little need for special training. The screening test must be reliable and must have been validated on a representative sample. Some of the objective tests used in primary care to screen cognitive function include the Memory Impairment Screen (MIS), the Mini-Cog, and the four-item version of the Montreal Cognitive Assessment test (MoCA) clock drawing test8 latter tests are dependent in part upon adequate audition so the use of a personal amplifier (assuming hearing has not been tested prior to the cognitive screen) when administering a cognitive screen could prove beneficial. In light of observational evidence that hearing difficulties could be associated with the development of dementia and could potentially skew performance on selected neurocognitive tests, the 5th Canadian Consensus Conference8 recommends assessing and recording hearing status in primary care clinics as a potential dementia risk factor.

It is beyond the scope of the paper to discuss in detail the cognitive screening tests used in primary care. Further, it is important to underscore that prior to incorporating a formal cognitive screening into clinical practice, experience administering and interpreting under the tutelage of an experienced clinician is imperative, as is adherence to the caveats/recommendations of the U.S. Preventive Services Task Force7 and the Canadian Consensus Conference.8

The World Health Organization (WHO)12 advocates an integrated, person-centered approach to working with older adults if healthy aging is to become a reality. The WHO suggests that health professionals can support healthy aging by gaining familiarity with and addressing selected chronic conditions which interfere with selected domains of functions such as mobility, visual status, hearing capacity, and cognitive capacity. Specifically, every attempt should be made to remove barriers to effectively function in one’s social context, such as managing and/or correcting hearing loss. Similarly, it is helpful for health professionals to gain experience in recognizing when a person presenting with hearing loss, hearing difficulty, and/or speech-in-noise complaints may display behaviors such as forgetfulness and communicative challenges (eg, difficulty finding or choosing the correct word) which may signify the presence of cognitive decline.

Audiologists play an important role in screening people with communication difficulties that may arise from hearing loss and/or cognitive decline not associated with typical aging who could benefit from the array of hearing-related interventions available.

Given the rise in life expectancy and the associated increase in the prevalence of hearing loss and cognitive decline/dementia, audiologists must broaden their knowledge base to be able to work effectively with persons with dementia (PwD) and sensory loss. To that end, we must be able to recognize behaviors associated with dementia, a 21st-century health challenge, to effectively communicate with these individuals (Table 4), and to maximize auditory capacity to help maintain or improve life quality. We have an outsized opportunity to have a positive effect on both hearing health and the cognitive health of our patients.

Citation for this article: Weinstein BE. Fundamentals of screening for mild cognitive impairment and/or dementia. Hearing Review. 2022;30(1).

“Selling” in the Professional Setting