At the International Hearing Society Convention in Savannah this past September, I had the pleasure of meeting Dick Freeman, Energizer’s North American sales manager for miniature batteries. At one point during the show, he brought me a press release detailing Energizer’s imminent plan to take its zinc-air batteries off the shelves and replace them with comparably performing Zero Mercury cells that have been more than 10 years in the making, and he implored me to get the word out.

In yet another display of my layman’s ignorance, I must confess my surprise at Freeman’s news. While I can’t say I didn’t know hearing aid batteries weren’t mercury-free–especially since Rayovac’s announcement last March of the delivery of its own nonmercury-bearing power cell–I’d still been operating under the assumption that batteries were already minus the mercury. In my defense, such misguidance stems from a consumer’s perspective, cultivated when mercury-containing household batteries were legislated out of existence near the end of the last century. And in my appreciation at picking up a pack of more environmentally friendly AAA batteries, I must’ve missed the fine print that explained button cells had been exempt.

But funny are the thoughts conjured up by that word “exempt.” With an imagination and skepticism like mine, it’s not too hard to picture back-room-style wheelings and dealings between politicians and lobbyists, with button cell battery manufacturing brass sighing in collective relief and slapping their collective back at being able to dodge such a detrimental legislative steamroller.

So it was with more surprise to have those fictional images destroyed by what I came to discover was an exemption born more or less from an honest, common-sense appeal. I don’t mean to simplify it too much, but in a nutshell the battery industry convinced lawmakers that it was impossible at that stage to remove mercury from button cells, and being ordered to do so would be a disservice, tantamount to rendering inoperable required medical devices used by a disabled population. It was an argument that resonated–at least for a few years or until states such as Connecticut and Maine picked up the baton and took the lead in calling for button cells to join their household battery brethren.

Once again, the surprise was mine. This time, instead of taking a “no we can’t” position, battery companies behind the representation of the National Electrical Manufacturers Association (NEMA) basically said “yes we can.” Moreover, rather than have an unrealistic date forced on them, they asked to be given the chance to come up with their own mercury-free compliance deadline. The lawmakers agreed, and the eventual do-or-die date decided upon was June 30, 2011.

Congratulations to Energizer and Rayovac, which, with more than 2.5 years to go, are the first to deliver on their promises of mercury-free hearing aid batteries. Energizer’s are on the shelves now, and Rayovac is hoping its Mercury Free ProLine brand will be available to consumers during the first quarter of 2009. 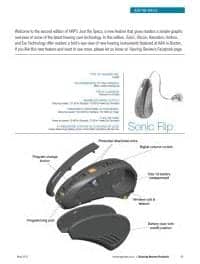