Avada Audiology to be Featured on PBS National Medical Report

Avada audiologist Dr. Lucas Doyle and Avada’s CEO, Steve W. Barlow, are scheduled to discuss the importance of regular hearing tests, and highlight the advanced technology of today’s hearing devices during the 7-minute segment. “Today, modern hearing devices have connectivity with landline telephones, cell phones, MP3 players, and DVD players. In the future the possibilities are going to be endless,” Barlow says.

The show will include patients who discuss how their quality of life has been improved by their hearing devices.

The program which reportedly reaches an audience of 96 million viewers daily is distributed to public television affiliates around the country to air nationally and internationally. It will be distributed to 349 public television stations in the United States and will air between 7 p.m. and 10 p.m. on MSNBC, FOX, and CNN. Copies of the program are available by contacting Avada at (800) 216-1185. 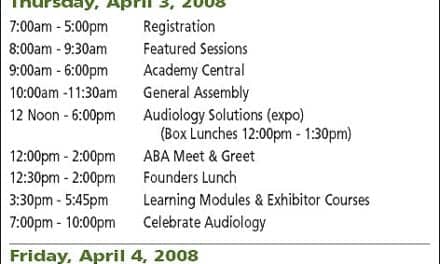 Walking Guide to the 2008 AAA Convention