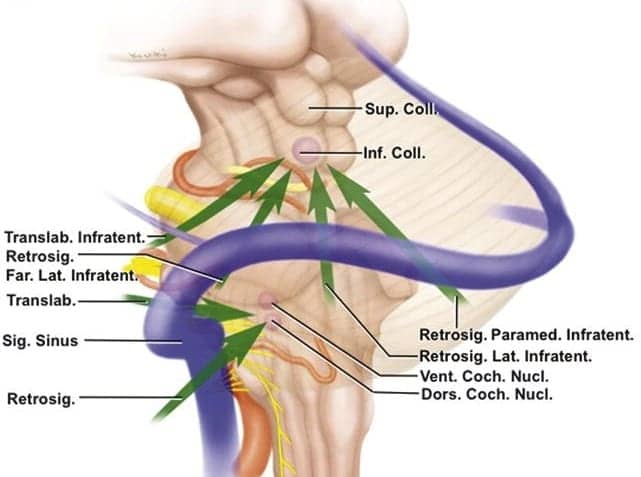 According to an article published in the June 2015 edition of Operative Neurosurgery, a team of US and Japanese experts has mapped out the surgical anatomy and approaches for the auditory brainstem implant. An announcement from Wolters Kluwer, which publishes the journal on behalf of the Congress of Neurological Surgeons, reports that Albert L. Rhoton, Jr, MD, and colleagues of University of Florida, Gainesville, and Fukuoka University, Japan, performed a series of meticulous dissections to demonstrate and illustrate surgical approaches to auditory brainstem implant placement. Their article, written as technical material for neurosurgeons, shares detailed anatomic color photographs, along with step-by-step descriptions of two alternative routes for neurosurgeons performing these demanding implant procedures.

As described in an April 2015 HR article that appears in the June 2015 issue of The Hearing Review, the auditory brainstem implant (ABI) can restore hearing for patients with profound deafness who can’t benefit from cochlear implants.

In their Operative Neurosurgery article, the authors explain that auditory brainstem implants can restore varying degrees of hearing to patients with “retrocochlear” hearing loss. These patients have deafness caused by damage to the cochlear nerves—sometimes called the acoustic or auditory nerves—which transmit sound information from the inner ear to the brain. The cochlear nerve damage most commonly results from brain tumors associated with a genetic condition called neurofibromatosis type 2 (NF2). 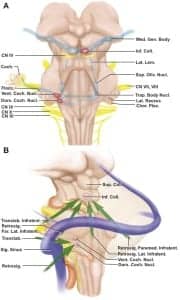 To date, more than 1,000 auditory brainstem implant procedures have been performed worldwide by a relatively small number of surgeons. The procedure was previously approved only for patients with NF2 aged 12 years or older. Recently, a clinical trial was approved for younger children with congenital malformations or other causes of retrocochlear deafness. More about the ABI trial for young children can be found in a February 18, 2015 article in The Hearing Review.

In the article based on their findings, Dr Rhoton and colleagues detail two surgical approaches: a “translabyrinthine” and a “retrosigmoid.” They outline a step-by-step route for both approaches, designed to provide safe access to the area while minimizing trauma to the brainstem and surrounding structures.

According to the announcement from Wolters Kluwer, Dr Rhoton and colleagues hope that their descriptions and illustrations will help to increase understanding of the anatomy and surgical approaches to auditory brainstem implantation, contributing useful hearing to adults and children with NF2 and other causes of retrocochlear deafness.

Source: Operative Neurosurgery (ONS), a companion publication to Neurosurgery from the Congress of Neurological Surgeons