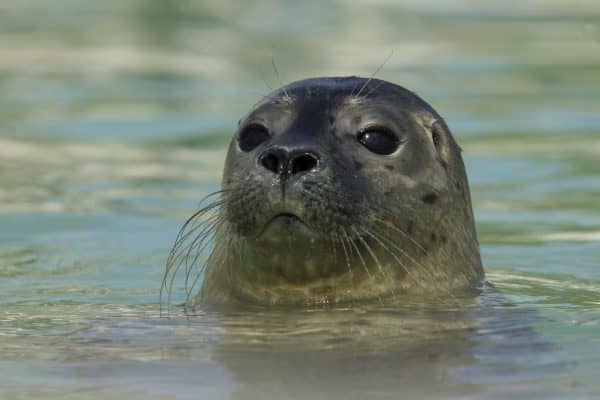 “Hoover the Talking Seal” famously imitated human speech. But can baby seals already adapt their voices to sounds? Researchers from the Max Planck Institute for Psycholinguistics in Nijmegen, the Free University of Brussels (VUB), and Sealcentre Pieterburen studied seal pups of only a few weeks old. The pups lowered the pitch of their voice when they heard louder noises. This vocal flexibility makes seals an excellent animal model for studying the evolution of human speech, according to an article published on the Max Planck website.

Hoover initially kept in a family home and could imitate human speech, barking catch phrases in a gruff accent (“Come over here”). But vocal learning—the ability to imitate sounds—is a rare trait among mammals. Only a few species may be capable of changing the pitch of their voice to sound higher or lower, which is a crucial element of human speech.

“By looking at one of the few other mammals who may be capable of learning sounds, we can better understand how we, humans, acquire speech, and ultimately why we are such chatty animals,” said MPI’s Andrea Ravignani, senior investigator of the study.

Are seal pups already capable of changing the pitch (or ‘tone height’) of their voices?

The researchers studied eight harbour seal pups—1 to 3 weeks old—that were being held in a rehabilitation center (the Dutch Sealcentre Pieterburen) before being released back into the wild. To investigate whether the pups could adapt their voices to noises in the environment, the team first recorded noises from the nearby Wadden Sea. For several days, the sea noises were then played back to the pups, in three degrees of loudness (varying from no sound to 65 decibel), but with a similar tone height to that of the seal pups’ calls. The team also recorded the pups’ spontaneous calls. Would the pups change their tone of voice to adapt to the sea noises?

When the seal pups heard louder sea noises, they lowered their tone of voice. The pups also kept a more steady pitch with the more intense noise levels. One seal clearly showed the so-called Lombard effect, producing louder calls when the noise got louder. The Lombard effect is typical for human speech, as people raise their voices in noise to be better understood. The pups did not produce more or longer calls when they heard different levels of sea noise.

Apparently, young seals adapt to the noises in their environment by lowering the tone of their voice, an ability they seem to share with humans and bats. Other animals in similar experiments only raise their voice (ie, make louder calls) in response to louder noise.

“Seal pups have a more advanced control over their vocalizations than assumed up until now,” said Ravignani. “This control seems to be already present at only few weeks of age. This is astonishing, as few other mammals seem capable of that. To date, humans seem to be the only mammals with direct neural connections between the cortex (‘the outer layer of the brain’) and the larynx (‘what we use to produce tone of voice’),” he said.

“These results show that seals may be the most promising species to find these direct connections, and unravel the mystery of speech.”

Source: Max Planck Institute for Psycholinguistics, Philosophical Transactions of the Royal Society B.

The More the Merrier: Multiple Talkers and Reverberation Effects on Work Performance