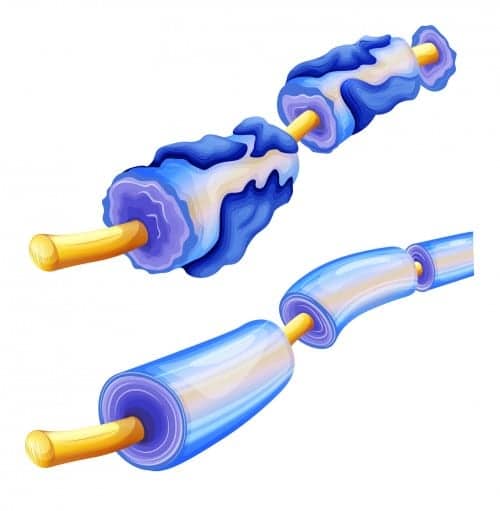 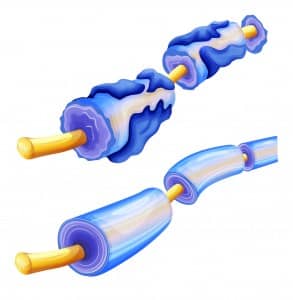 Researchers from the University at Buffalo (UB) have discovered a way to use an already approved drug to boost myelin synthesis, a process that aids auditory function and communication between nerve cells. According to an article published online in the February 25, 2015 edition of The Journal of Neuroscience, it may be possible to boost myelin regeneration by targeting human oligodendrocyte progenitor cells with solifenacin, which is an anti-muscarinic drug that currently is approved and marketed to treat overactive bladder.

In the study article, the researchers explain that damage to myelin, the fatty insulator that enables communication between nerve cells, characterizes many neurological diseases, such as multiple sclerosis (MS). The damage from a lack of myelin regeneration doesn’t occur all at once, according to the scientists, but over time as a disease progresses and as a patient ages.

“We have identified a new drug target that promotes stem cell therapy for myelin-based disease, such as MS,” said lead author Fraser J. Sim, PhD, assistant professor in the Department of Pharmacology and Toxicology in the University at Buffalo School of Medicine and Biomedical Sciences. “Our hypothesis is that in MS, the oligodendrocyte progenitor cells seem to get stuck,” Sim explained in a UB announcement. “When these cells don’t mature properly, they don’t differentiate into myelinating oligodendrocytes.”

Although the primary myelin-based disease highlighted in this study is multiple sclerosis (MS), an August 2014 article in The Hearing Review, among other articles, described how myelin also plays a role in auditory function—the auditory nerve is sheathed in myelin, and an important property of auditory signal transmission consists of electrical signals “jumping” from one myelin domain to the other. 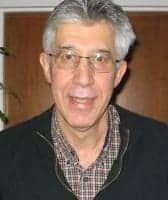 Sim and his colleagues teamed up with Richard J. Salvi, PhD, SUNY Distinguished Professor in the Department of Communicative Disorders and Sciences, and director of UB’s Center for Hearing and Deafness. Auditory brainstem response tests conducted by the team showed improvement in the response to auditory signals in animals transplanted with the human oligodendrocyte progenitor cells treated with solifenacin. Sim and colleagues are reportedly seeking funding for a small human trial using solifenacin. 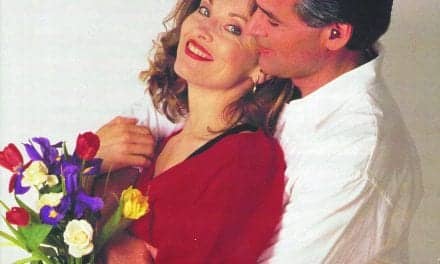