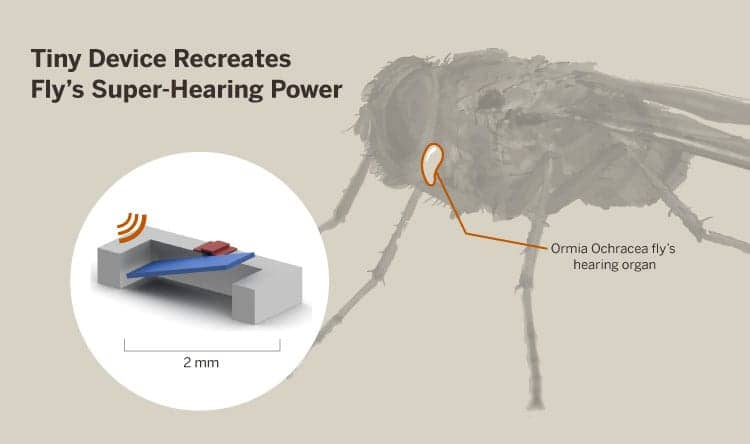 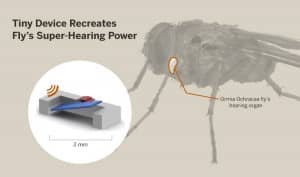 Cockrell School engineers developed a tiny, low-power device that mimics a fly’s super-evolved hearing mechanism. The device could be used to build a new class of hypersensitive hearing aids.

A team of researchers at the Cockrell School of Engineering at The University of Texas at Austin (UT Austin) has developed a tiny, low-power device that mimics a fly’s hearing mechanism. The new device could be used to build the next generation of hypersensitive hearing aids with intelligent microphones that adaptively focus only on those conversations or sounds that are of interest to the wearer.

The researchers drew inspiration for the device from the yellow-colored Ormia ochracea fly, which can pinpoint the location of a chirping cricket with remarkable accuracy because of its ultra-sensitive acute hearing. The fly relies upon a sophisticated sound-processing mechanism that resembles a teeter-totter to determine direction of sound within two degrees.

Using the fly’s ear structure as a model, Neal Hall, PhD, an assistant professor in the Cockrell School’s department of electrical and computer engineering and his graduate students built a miniature pressure-sensitive device out of silicon that replicates the fly’s super-evolved hearing structure. The 2-millimeter-wide device is nearly identical in size to the fly’s hearing organ.

Other researchers have built fly-inspired hearing devices, but the UT Austin engineers are the first to apply piezoelectric materials. These materials turn mechanical pressure into electric signals (or voltage) and allow the device to operate with very little power. The article detailing the device and research will be published in the journal Applied Physics Letters.

“Because hearing aids rely on batteries, minimizing power consumption is a critical consideration in moving hearing-aid device technology forward,” Hall says. “This technology may be a boon for people who are hearing impaired in the future. Currently, only 2% of Americans wear hearing aids, but as much as 10% of the population could benefit from wearing one,” Hall adds.

“Many believe that the major reason for this gap is patient dissatisfaction. Turning up the volume to hear someone across from you also amplifies all of the surrounding background noise—resembling the sound of a cocktail party.”

Humans and other mammals have the ability to pinpoint sound sources because of the finite speed of sound combined with the separation between our ears. Insects generally lack this ability because their bodies are so small that sound waves essentially hit both sides simultaneously.

O. ochracea is a notable exception. It can locate the direction of a cricket’s chirp even though its ears are less than 2 millimeters apart. In the four millionths of a second between the sound entering one ear and the other, the sound phase shifts slightly. The teeter-totter-style structure in the fly’s ear effectively amplifies the time delay and allows the fly to locate its cricket prey with remarkable accuracy.

Hall credits the pioneering work of Ronald Miles at Binghamton University and Ronald Hoy at Cornell University, along with their teams, who discovered the fly’s unusual hearing mechanism, for inspiring this research and device.

In addition to possibly improving hearing aids, the device could have military and defense applications as well. In dark environments, for instance, where visual cues are not available, localizing events using sound may be critical.

To read more about research on flies and hearing, click here. 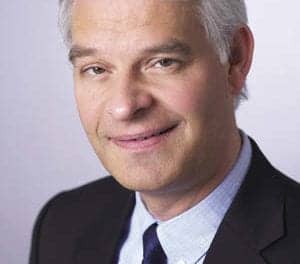