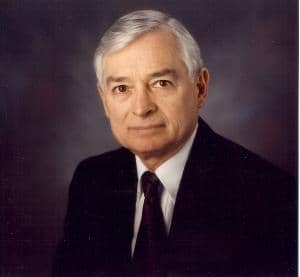 The National Institute on Deafness and Other Communication Disorders (NIDCD), one of the National Institutes of Health, announced, with deep sadness, the passing of former NIDCD director Dr James Byron Snow, Jr, MD, who died on May 28, 2022. Dr Snow made significant contributions to research and clinical practice in otolaryngology (diseases of the ear, nose, throat, and related structures of the head and neck) and is considered a pioneer in the field. Beginning in February 1990, he served as the NIDCD’s first official director, succeeding acting director Jay Moskowitz, PhD.

Dr James Byron Snow organized the new institute and recruited a distinguished cadre of scientists in the NIDCD research mission areas: hearing, balance, taste, smell, voice, speech, and language. He encouraged the application of molecular biology to the study of disorders of human communication. He served as the liaison between NASA and the National Institutes of Health (NIH). In 1990, he established the NIDCD’s Division of Intramural Research (on-campus research in Bethesda, Maryland), and in 1991 he created the NIDCD Board of Scientific Counselors to advise the director of the Division of Intramural Research.

“Dr Snow was a world-class otolaryngologist who encouraged collaboration among scientists in the field. As the first official NIDCD director, he created significant opportunities for scientists and trainees alike to perform impactful research in the NIDCD’s mission areas,” said Debara L. Tucci, MD, MS, MBA, current NIDCD director. “Dr Snow paved the way for the immense research contributions of internationally known NIDCD intramural scientists and grantees. He will be missed by all those who had the privilege to work with him.”

Dr Snow was inducted into the Society of Scholars of Johns Hopkins University, and in 1993 he received the Distinguished Achievement Award of the Deafness Research Foundation (now the Hearing Health Foundation). He received the Senior Executive Service Presidential Meritorious Executive Rank Award for his government service. Following his retirement from NIDCD in 1997, he served as president of the international Collegium Oto-Rhino-Laryngologicum Amicitiae Sacrum (CORLAS) and presided at its annual meeting in Washington, DC, in 2000. Dr Snow served as convener/correspondent of the Tinnitus Research Consortium. Subsequently, the James B. Snow Jr, MD, Tinnitus Research Award was established in his honor by the Collegium Oto-Rhino-Laryngologicum Amicitiae Sacrum. In 2003, he received the Award of Merit of The American Otological Society (AOS).

He received his MD, cum laude, from Harvard Medical School in 1956. Dr James Byron Snow served his surgical internship at The Johns Hopkins Hospital in Baltimore and took his residency in otolaryngology at the Massachusetts Eye and Ear Infirmary in Boston. From 1960 to 1961, he served as a captain in the Army Medical Corps at the 121st Evacuation Hospital in Korea, where he was the only otolaryngologist in the Eighth US Army. After his military service, Dr Snow joined the faculty of the University of Oklahoma Medical Center in Oklahoma City, where he received the Regents’ Award for Superior Teaching. He rose to professor and head of the Department of Otorhinolaryngology. In 1972, he became a professor and department head at the University of Pennsylvania School of Medicine in Philadelphia. Dr Snow was responsible for the training of more than 80 specialists in his field, and for mentoring countless others.

The NIDCD joins researchers worldwide in mourning the passing of Dr Snow and extends our condolences to his family, former colleagues, and students.