Two independent studies, the results of which are summarized in the October edition of The Hearing Review by Kamkar-Parsi et al, show that Speech Reception Thresholds (SRT) improved up to 2.9 dB (a 25% advantage in speech understanding) for binax wearers compared to people with normal hearing.

The binax platform builds on the e2e wireless™ technology that Siemens introduced a decade ago (see the February 2014 article “A History of e2e Wireless Technology” by Rebecca Herbig et al). Now in its third generation, e2e wireless 3.0 enables real-time exchange of audio signals among four microphones (two on each hearing aid in a bilateral fitting). Each hearing aid processes this audio input, creating a virtual 8-microphone network designed to deliver a heightened sensitivity of acoustic environment, or High Definition Sound Resolution (HDSR).

Importantly, binax provides this to the user automatically without compromising spatial perception or battery life.  At the EUHA convention, the Siemens booth featured a demonstration in which a KEMAR was situated within a soundfield array of speakers and attendees both heard the difference as well as viewed the energy consumption of the system which varied from about 1.3 to 1.6 mA depensing on if the new binaural system was disengaged or engaged.

According to a Siemens press release, key binaural features derive practical benefits for the wearer, including:

Narrow Directionality: Focuses more precisely on the speech source at the front of the wearer by automatically narrowing the beam of the directional microphones. This helps wearers better recognize speech in demanding listening situations while maintaining spatial awareness.

Spatial Speech Focus: Highlights dominant speech from any direction, while suppressing background noise. It’s automatically activated when the wearer is in a car and does not affect spatial perception.

eWindScreen binaural: When in wind, strategically transmits audio signals from the instrument with better sound quality to the other one, without compromising spatial perception or speech intelligibility.

Other features and new devices launched by Siemens at EUHA:

easyTek™ wireless remote/streamer. The new easyTek is the successor to Siemens’ award-winning miniTek, and is available for Pure® and Carat™ binax hearing aids. easyTek is only 2 inches in diameter and weighs less than an ounce, yet Siemens says its performance is superior to other streaming devices in its class. A single button controls streaming, answers phone calls, and connects to virtually any external audio source. easyTek works “out of the box” and seamlessly pairs with the users’ hearing aids to provide added functionality and Bluetooth streaming. It works with both iPhone and Android devices.

easyTek App. An easyTek App transforms Android and iPhones into a hearing aid control center. The app makes the most of binax technology using the Spatial Configurator (SC) feature. Using the SC, wearers can visually extend easyTek’s functionally by manually adjusting the direction and span of the hearing aids’ microphones via their smartphone. This gives them instant control over both where and who to listen, regardless of whether the sound source is coming from the left, right, in front, or behind. This allows a wearer, for example, to focus on the conversation of the person next to him at dinner, even if distracting, more dominant speech is coming from another direction. The easyTek App is a free download via the App Store and Google Play.

Pure, Carat, and Ace™ RICs will be the first hearing aids introduced on the binax platform. 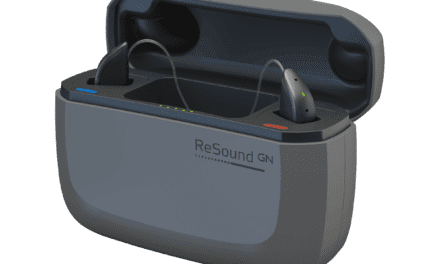