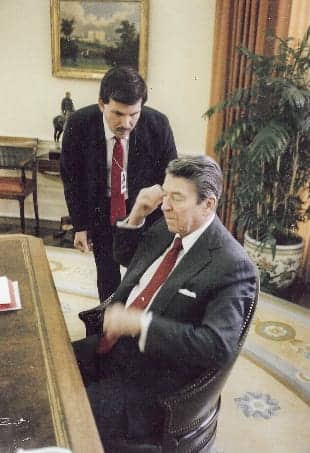 President Ronald Reagan was fit with hearing aids in the early 1980s and again by Dr Thomas Powers in February 1988. Here’s a first-hand account of fitting the President.

The initial announcement of President Ronald Reagan wearing hearing aids was 30 years ago this month on September 7, 1983 (see p 52 of the September edition of HR that is polybagged with this edition of HRP). Five years later, the President was looking to update his devices and was ultimately fit by prominent industry audiologist Thomas Powers, PhD, who is now the vice-president of audiology at Siemens Hearing Instruments. HRP thought it would be interesting to get Dr Powers’ recollections about the Presidential fitting:

Question: How did Siemens initially get involved in fitting President Reagan with hearing instruments?

Powers: Siemens was initially involved with fitting the President through our relationship with the House Research Institute (formerly the House Ear Institute)—and also because of my relationship with Dr John House, whose father founded the Institute. Dr House was President Reagan’s otolaryngologist when Reagan was governor of California and continued as the President’s ENT during his White House years. I met Dr House while serving on the American Academy of Otolaryngology Hearing Aid Committee in the 1980s.

Question: When did you find out you were going to fit the President?

Powers: We had an extensive relationship with the House Research Institute, so it wasn’t unusual for us to receive requests from them to process hearing aids for celebrities and other “VIPs.” One day in December 1987, I received a call from Dr House saying he had another VIP order to send my way. I told him to just send it on over, and he told me, “No, Tom—this is a real VIP—it’s President Reagan.” Then he said, “What are you doing February 9?” I wasn’t sure why he was asking this so I told him I wasn’t sure. Then he asked me a second question that I’ll never forget. He said, “I’m a surgeon, not an audiologist—would you be willing to come with me to the White House on February 8 to fit the President?” Without checking my calendar, I immediately told him I was available.

Question: What kind of clearance did you have to get prior to seeing the President?

Powers: First, there were several phone calls with the Secret Service where they asked a number of questions about myself, my family, and pretty much everyone I knew—it was quite an extensive background check. They also wanted to know exactly what I would be bringing to the White House in addition to the hearing aids; everything had to be documented so there would be zero surprises when I went through security.

Question: What devices did Siemens manufacture for President Reagan?

Powers: The President wanted a set of small custom instruments, so we built him a pair of half shells, similar to how they’re built today. The President also specifically wanted a remote control, which Siemens hadn’t officially released yet. We figured, if we had to make an exception for anyone, it would surely be the President of the United States.

The instruments themselves were a very special order combining two circuits—both of which were on the market. The challenge was that we had just never combined the two together in one instrument. The first was a traditional AGC-I compression circuit and the other was a circuit we referred to at the time as ASP—automatic signal processing. This circuit was somewhat of a precursor to today’s noise reduction circuits, in that it had the low frequency gain to give him some noise reduction.

Question: If the President wanted small instruments, why not CICs?

Powers: The decision to build half shells was really based on the amount of circuitry that we needed to put in the instruments. CICs existed then, but the combination of the two circuits along with the other components just wouldn’t have fit into a CIC back then. We wanted to make sure we were giving him the best hearing solution possible, so a half shell was the optimal balance between the cosmetics and the circuitry he needed.

Question: How did the manufacturing process go?

Powers: It was really a team effort. Siemens received the order just before the holidays in December 1987, so we had about 4 to 6 weeks to prepare. We had plenty of time, but given the one-of-a-kind circuit we were building, and the fact that we had to make two sets of instruments—one as a primary and another as a backup—we still had to work quickly. We wanted to make sure every single box was checked and rechecked before I went to Washington. Fortunately, we had a top-notch team of about 8 to 10 people, including some very fine assemblers whose job it was to fit all of this circuitry into what would be the President’s hearing aids. Some of the people from that team 25 years ago still work here at our New Jersey facility today.

Question: Walk us through the day that you fitted the President.

Powers: The Siemens shell lab manager and I arrived in Washington, DC the night before with essentially an entire shell laboratory and every piece of equipment you could imagine. Since I was the only one allowed in the White House, and because I had already given the Secret Service a list of what I was planning to bring, we set up a makeshift shell lab in our hotel room near the White House. That way, if any major adjustments needed to be made, I could just walk over to the hotel room and we would make them.

The day I fit the President was February 9, 1988. I gathered up the two sets of instruments and a few small pieces of equipment, and I made my way to the White House security entrance. After passing through security, we were escorted into the White House Medical Complex, which was on a lower floor of the White House. I waited there, was instructed on a few things, and waited a few minutes more for the President to come down the elevator. I remember watching and hearing the chime on a small monitor, indicating the President was on his way down.

The doors opened, and two Secret Service personnel came out first, followed by President Reagan, and two more Secret Service agents behind him. He shook my hand and joked around a little bit with us. I was nervous, but he immediately made me feel at ease. I fit him with the hearing aids, and turned them on. He wanted to test them on his phone, so he invited us upstairs to the Oval Office.

When we arrived in the Oval Office, he sat at his desk, picked up the phone, and called the First Lady. After their brief conversation, he hung up, and said things were just a little bit “too boomy.” So I decided to make a few minor adjustments. I pulled a small tool out and made some quick modifications while he was wearing the hearing aids. I could only imagine what the Secret Service agents were thinking while looking at me stick this thing that looked like a mini screwdriver into the President’s ears. After the instruments sounded the way he wanted, we talked for a little while, he thanked me, and I left.

Question: Was the President a good patient?

Powers: Yes, actually he was a very good patient. Besides making you feel at ease, he was extremely patient. He listened. He asked questions and was really interested in the technology. He had such a presence about him—he was certainly tall, taller than me, but he commanded a presence—you just knew he was the President. Before I left, he took a picture with me and told me to stop at his secretary’s desk for a small memento. I received a set of cufflinks with his signature engraved and the Presidential Seal on the back—that was pretty cool.

Question: Any other interesting facts or stories about the President?

Powers: Actually, while preparing for a trip to Russia, which at the time was still the Soviet Union, I received a call from the Secret Service about Telos, the remote control. Since there was communication between the remote and the President’s hearing aids, there was a concern that someone could potentially tap into that signal and listen in on conversations the President was having. Given the technology at the time, this wasn’t possible, but I was amazed the Secret Service would even think of this—then again, that’s their job. Even though I assured them it wasn’t possible, we ended up making an extra set for the Secret Service to test.

HRP thanks Siemens Hearing Instruments Communications Specialist John Urbaniak for his assistance in writing this article. 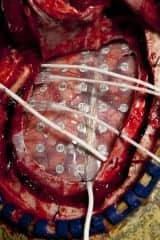