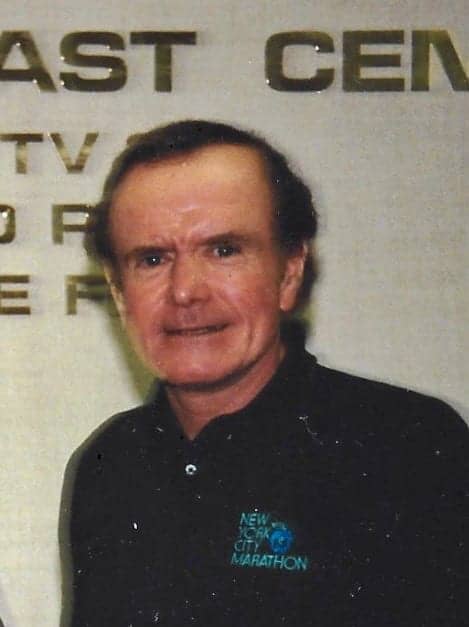 Joe had a passion for hearing healthcare advocacy and running—he ran in over 100 marathons and always wore track shoes—and he often combined these two passions to become an irrepressible force for getting hearing care professionals and industry personnel together for BHI’s “Run for Better Hearing” fundraising events. He even persuaded dozens of people in the industry to participate in the annual Grandma’s Marathon in Duluth, Minn, including Gallaudet University Former-president Dr. I. King Jordan, running the 26-mile course along Lake Superior. He also organized 5K fun-run/walk events on the first day of many major hearing care conventions—and often drew rowdy and enthusiastic participants.

Rizzo always seemed to have a “can do” attitude and an infectious smile. His gregarious personality served him well when enlisting throngs of famous spokespeople for BHI. Throughout the 1970s, 1980s, and much of the 1990s, BHI enlisted more than 60 celebrities—including Bob Hope, Arnold Palmer, Leslie Nielsen, Richard Thomas, and Al Unser—to address the often-hidden problem of hearing loss. Through thousands of public service message (PSA) television and radio broadcasts and print ads, celebrities provided their personal accounts of hearing loss and told of how they were helped via hearing care professionals and hearing instruments. The people ranged from actors like Ed Asner, to political leaders like Ronald Reagan and Bill Clinton, to sports personalities like football player Mike Singletary and baseball player Curtis Pride, and medical experts like Former Surgeon General C. Everett Koop.

“Joe Rizzo was a pioneer in raising public awareness of hearing healthcare on a shoestring budget for the US market,” said Sergei Kochkin, PhD, a BHI Board Member who worked with Rizzo from 1992-1998 and eventually became BHI’s executive director from 2005-2012. “His basic PR model was to secure the endorsement of famous celebrities including movie stars, authors, physicians, and politicians (notably President Reagan) and to develop Public Service Announcements (PSAs) with tens of thousands of free interstitial television and radio ads, as well as high quality free print PSAs in newspapers and magazines. In addition, he wrote concise scholarly consumer brochures which were distributed to millions of consumers. The impact of his 25-year PR campaign (1973-1998) around the themes ‘You should hear what you’re missing,’ and ‘You too can be helped medically, surgically, or like me with hearing aids’ is immeasurable.”

He also oversaw the creation of some of the first public service videos for the field. In 1983, BHI produced a hearing conservation film called Listen Up with Norm Crosby that also included several other well-known celebrities. About 10 years later, BHI updated this film with celebrities like Richard Dyshart of LA Law in a film titled, People vs Noise.

“Whatever Joe Rizzo decided to do, whether it be running, music, or promoting better hearing awareness, he did it with passion and dedication. His contributions to promoting better hearing awareness for all those who need it are unmatched,” said Ross Roeser, PhD, who served as BHI president for many years and is now professor and executive director emeritus of the Callier Center for Communication Disorders at the University of Texas Dallas (UTD).

Following retirement, he served four years as CEO of Orlando’s Festival of Orchestras, concert presenter of the world’s top orchestras. He also served on Central Florida boards of Habitat for Humanity, the YMCA, the Alzheimer Resource Center, and served as President of the University Club of Winter Park.

He is survived by his wife of over 61 years, Nita Marie. His oldest son, Joe Carl passed away in September. His son, Michael Sean, lives with his mother in Winter Park. He is also survived by two grandsons, Michael and Matthew. There will be a Celebration of Life service held in March at the University Club of Winter Park. In lieu of flowers, please make donations to the Winter Park Playhouse.

The Hearing Review thanks David Kirkwood, former editor of The Hearing Journal, for alerting us to Joe’s passing, as well as Sergei Kochkin and Ross Roeser for their comments. This tribute incorporates parts of the obituary published in the Orlando Sentinel (February 26, 2019).