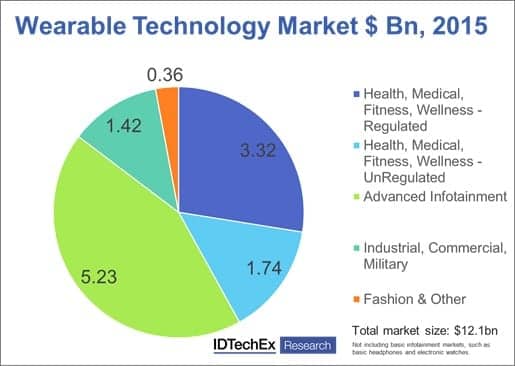 IDTechEx predicts that the wearable technology market will rise from $24.2 billion in 2015 to three times that size in ten years—creating a market of $74 billion in 2025. According to the company, there is increasing demand for existing enabling components, and also ample opportunity for new technologies as electronics move from bulky devices to ones that can conform to the wearer.

The IDTechEx Wearable USA event is an international conference and exhibition that focuses on wearable technology requirements from big brands and industries, in addition to technology innovations that are enabling new products to meet those demands. Attended by 719 people and over 30 exhibitors in 2014, this is considered to be the largest show in the US covering wearable technology, with speakers covering progress of this technology for healthcare, fashion, sportswear, enterprise, and military applications.

IDTechEx reports that as traditional consumer electronics devices begin to saturate, new markets are being explored, and foremost among them is wearable technology. However, wearable gadgets thus far have had mixed success, due to bulky electronics with many limitations, power being one of them.

The IDTechEx Wearable USA event looks at what is really wanted by end users. The event will include discussions with multiple speakers who will address relevant issues such as consumer needs and technical progress, among others. The event covers new innovations from materials to components that offer flexibility, elasticity, transparency, longevity, and other benefits, including big research breakthroughs and global changes. Additionally, there will be discussions of how the big OEM brands see the market evolving with added business intelligence from analysts.

Wearable technology is one of the most popular trends. There has been a 10-fold increase in Internet search interest since the beginning of 2013, with about $1 billion invested in wearables in 2014 alone. IDTechEx Research predicts that this level of investment will rise as the largest companies in the world compete for a slice of the wearables market.

IDTechEx Research reports that it maintains a comprehensive database of over 1,200 companies across the entire wearables ecosystem. By constantly updating and growing this resource, IDTechEx Research analysts are able to observe trends and identify opportunities for growth in this highly competitive field. These trends and opportunities will be highlighted at the November event.

IDTechEx produced a chart that gives the 2015 split of wearable technology devices by revenue, excluding basic “infotainment” devices such as basic headphones and electronic watches. The company says that wrist-worn devices (under “Advanced Infotainment”) are currently the most popular and publicized area in wearable technology. Smart watches in particular have been extremely prominent in the media, culminating in the eagerly anticipated Watch from Apple. Smart wristbands (such as the Fitbit Flex and Jawbone Up) have also become increasingly popular, with the market for fitness trackers being one of the key growth sectors.

The November event is intended to provide a platform for meeting other players to assess the state of play, the emerging technology options coming into the landscape, and conduct extensive business development and networking. Aimed at the full ecosystem from fashion brands to healthcare to material providers, the meeting organizers say that attendees will learn about the unmet needs and opportunities in this sector. 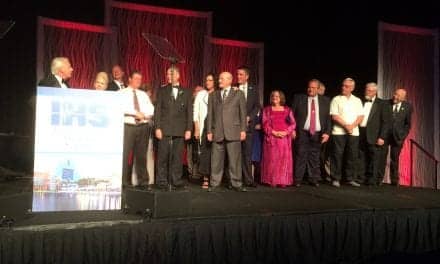