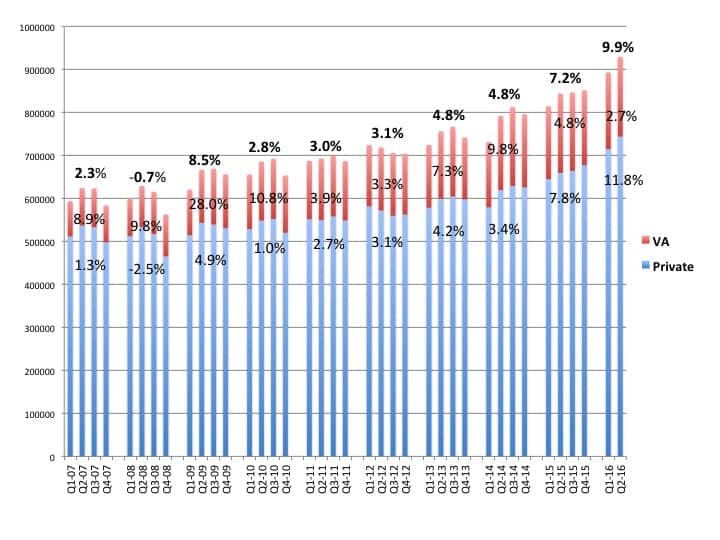 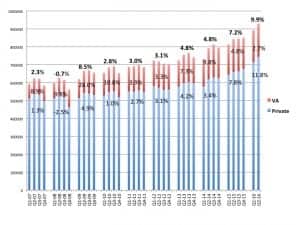 [Click on image to enlarge.] Hearing aid net unit sales by quarter, with VA dispensing in red and private/commercial-sector dispensing in blue. Sales in H1 2016 grew by 9.9% for the total market, 11.8% for the private sector, and 2.7% for the VA. Source: HIA.

According to statistics released today by the Hearing Industries Association (HIA), Washington, DC, hearing aid net unit sales in the second quarter (Q2) of 2016 grew by 10.1% compared to the same period last year. Private/commercial-sector hearing aid sales outpaced dispensing activity at the Department of Veterans Affairs (VA) with a 12.8% increase in units sold, while the VA’s dispensing activity remained basically static (0.4%) compared to Q2 of last year. This follows a very good first quarter for the hearing industry, when sales grew by 9.7% for the total market: 10.8% for the private sector and 5.3% for the VA.

At the current pace, US hearing aid sales would approach 3.7 million units by year’s end.

It should be noted that unit volume sales of some Big Box retail (eg, Costco) outlets are included in the private sector sales, so the percentage increases reported here are not necessarily reflective of the typical traditional dispensing office. Additionally, there are two new reporting members in HIA, Hansaton and Intricon. Both are long-time players in the hearing industry and maintain US headquarters in Minneapolis. IntriCon Corp, a US public company, develops and supplies components and manufactures hearing aids for many medical device firms and hearing aid distributors, including their joint partnership with the Academy of Doctors of Audiology (ADA) and EarVenture and United Healthcare’s Hi HealthInnovations. Hansaton, a part of Hansaton Akustik GmbH, was founded in Germany in 1957 by Rudolf Fischer, and was purchased by Sonova in 2015. In more recent years, it has become known for its rechargeable hearing aid technology and its Surround SoundHD, Beat, and  jamHD lines of hearing aids.

The new reporting members are unlikely to account for a large portion of the growth seen in the first half. However, as with last year’s unit growth of 7.2%, it is uncertain how much Costco and other Big Box retailers are contributing to these growth figures.

The growth of wireless hearing aid features also continues. In the first-half of 2016, about 9 of 10 (87.5%) hearing aids sold contained wireless technology, according to the HIA statistics. 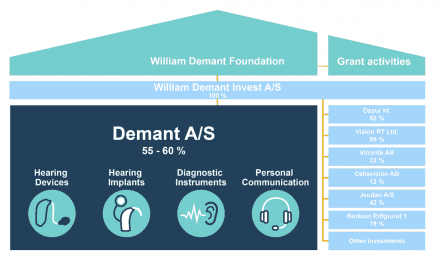 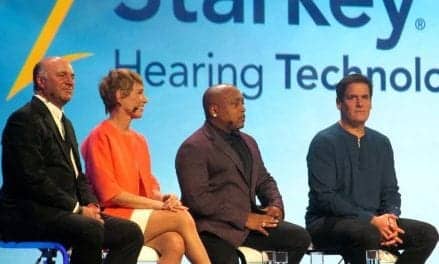