Traditionally, distortion product otoacoustic emission (DPOAE) and auditory steady state response (ASSR) signals have been measured using time-averaging and the Fast Fourier Transform (FFT) method. In this method, signals are first divided into data blocks, and these blocks are then averaged over time to improve the signal-to-noise ratio.

However, block averaging can introduce significant time delays before the signal is known, especially in the presence of transient artifacts (eg, door slamming, talking) during DPOAE recording, or muscular artifacts during ASSR recording. When averaged into the calculation, these artifacts may degrade the accuracy of the results. In addition, the FFT method does not allow continuous recording of DPOAE signals, making measurements of rapid changes of DPOAEs difficult. Such rapid changes may be of interest for the study of temporal characteristics of DPOAE suppression.

A new, patented1 method, called Vivography™, has been designed for analyzing physiological signals. While the FFT method analyzes all of the frequency components in the signal, Vivography analyzes only the frequencies of interest: in the case of DPOAE, the exact frequencies of each primary and of the distortion products; in the case of ASSR, the modulation frequency. Vivography was developed to concentrate the processing power of the computer on looking only for a few frequencies, rather than spending its resources analyzing all frequencies. The technology has been implemented in VivoScan™ portable clinical audiometers and DPOAE/TEOAE/ ABR/ASSR devices. It will also be implemented for clinical ASSR testing in the ICS Medical CHARTR® Evoked Potential System.

Assessing Hair Cell Function
Otoacoustic emissions (OAEs) are stimulated and non-stimulated faint sounds produced by oscillations of the outer hair cells in the cochlea. These sounds can be measured in the occluded ear canal, and provide valuable diagnostic information on cochlear function.2

Figure 1. Typical spectrum in DPOAE recording showing the two primaries (f1 and f2) and the cubic distortion product (DP) which is defined as 2f1 – f2.

Traditional Measurements
Every measured signal (eg, sound, light, radio waves, etc) is composed of one or more signal elements with different frequencies and phases. The Fast Fourier Transform (FFT) is a mathematical method for analyzing “all” of the frequency components of a signal.4 First, the signal is recorded digitally for a period of time. Next, this signal record is analyzed using FFT software. The analysis shows the spectral signal elements at every frequency within the analysis window. Figure 2 shows a pure sine-wave signal at 1000 Hz, and a display of the FFT analysis. In this case, there is only a single frequency element at 1000 Hz.

The ideal signal measured during a DPOAE test consists of two primaries and the resulting DP signal, all at different frequencies (Figure 3). Unfortunately, real signals in DPOAE and ASSR measurements contain acoustical and electronic noise, respectfully. This can make it difficult to measure the amplitude of the signals accurately. For example, more realistic cubic DPOAE signal and spectrums are shown in Figure 4.

Using the FFT method, DPOAE or ASSR signals are divided into data blocks and averaged to improve the SNR. However, block averaging introduces significant time delays before the signal is known, especially in the presence of artifacts. Artifacts that are transient, like the slamming of a door or a person talking during DPOAE testing (or muscular artifacts in ASSR testing), are averaged into the calculation, degrading the accuracy of the results. In addition, the FFT method does not allow continuous recording of signals, making measurements of rapid signal changes difficult. However, such rapid changes may be of interest, for example, when studying the dynamic characteristics of DPOAE suppression.

Alternative Measurement Method
While the FFT method analyzes all of the frequency components in the signal, Vivography analyzes only the frequencies of interest: the primaries and DPOAEs, or ASSR modulation frequency. The method is analogous to pointing a laser beam directly at a target only, in contrast to using a searchlight to illuminate a wide area containing the target and many other objects.

Vivography is based on a digital signal processing technique known as Kalman filtering, which is a recursive solution to the discrete-data linear filtering problem, first published in 1960.5,6 Since that time, due in large part to advances in digital computing, the Kalman Filter has been the subject of extensive research and application, particularly in the area of autonomous or assisted navigation. The filter is very powerful in several respects: it supports estimations of past, present, and future states, and it can do so even when the precise nature of the modeled system is unknown. (Author’s Note: The mathematical basis for Kalman filtering is well documented, and interested readers can find more information on this subject on the Web site version of this article at www.hearingreview.com.)

Vivography has been developed to provide three advantages over conventional methods:

Resolution and speed. The new technology is designed to isolate the frequencies of the primaries and the signal with much higher resolution. The higher the resolution, the more accurate the measurement, because an artifact that is close to the signal frequency will be rejected. For example, the FFT method requires at least 10 seconds of data in order to achieve a resolution of 0.1 Hz, and the signal is averaged within this 10-second interval. In contrast, the new method achieves the same resolution of 0.1 Hz in less than a second without block-data averaging. This makes it suitable for testing at multiple test frequencies, which is particularly important for multi-frequency ASSR testing.

Continuous Recording of Signals. The new technology does not record the signal for a period of time before analyzing it; rather, it analyzes the signal continuously. Once the DPOAE signal has been acquired, it is followed and displayed in real time without block averaging. This makes the method suitable in such applications as the study of DPOAE behavior over time (particularly with suppression), because it can measure not only the amplitude, but also the latency of the suppression, accurately with 1-millisecond resolution.

Transient artifact rejection. By continuously recording the signal, Vivography has the ability to identify and reject noise that is transient in nature (eg, talking, doors slamming, muscular electric artifacts, etc). Since most noise covers a broad frequency range, there will usually be frequency components of this noise that overlap with the signal.

During transient noise, it is impossible to distinguish the DPOAE signal from the noise. However, when the noise level falls below the intensity of the DPOAE signal, the DPOAE signal predominates. If the DPOAE is stable, then the measured signal will also be stable for this period of time. Vivography rejects transient artifacts by looking for periods of stable signal that also have good SNR. For example, a signal is considered to be a DPOAE response if it is stable to within ±1 dB SPL over a period of 400 ms. Good DPOAE responses can be accurately measured by this method, even in the presence of strong transient noise.

Clinical Applications
The new method is applicable in those clinical situations where the frequency of the signal is known and high speed and accuracy of measurement are required in real-life clinical settings. This is particularly important for diagnostics and hearing-loss monitoring in ototoxicity, noise-induced and music-induced hearing loss. Its robustness in transient noises is important for hearing-screening settings where acoustic conditions are far from those found in a soundproof booth.

Real-time recording of DPOAEs using Vivography is effective for the study of medial olivo-cochlear reflex (MOCR) because it allows adequate temporal resolution to study the latency of DPOAE suppression onset and offset.7 More recently, the technology has been used to assess real time DPOAE contralateral suppression in chinchillas and humans (A.L. James and colleagues, unpublished data, 2002). 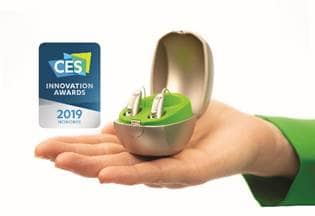