Researchers from the National Institute on Deafness and Other Communication Disorders (NIDCD), part of the National Institutes of Health, have found a strong association between hearing impairment and depression among US adults of all ages—particularly in women. The findings were similar among whites, blacks, and Hispanics.

Chuan-Ming Li, MD, PhD, in the Extramural Epidemiology and Statistics Program at the NIDCD, was the lead author of the study. The researchers used 2005-2010 data from the National Health and Nutrition Examination Survey (NHANES). NHANES is a nationally representative survey conducted by the National Center for Health Statistics (part of the Centers for Disease Control and Prevention or CDC). The report is published in the March 6, 2014 online edition of JAMA Otolaryngology—Head & Neck Surgery.

The findings are based on self-reports of hearing loss among adults ages 18 or older along with a standard questionnaire to assess depression based on the frequency and severity of symptoms. Adults 70 or older were also tested for hearing loss by trained examiners in an NHANES mobile examination center.

Among men and women 70 years or older, self-reported hearing loss was not associated with depression. However, women (but not men) whose hearing tests revealed moderate hearing loss were more likely to be depressed than those who did not have hearing loss.

The researchers note that health professionals may be better able to improve the quality of life among people with hearing impairment by recognizing the signs and symptoms of depression and referring patients for mental health services. 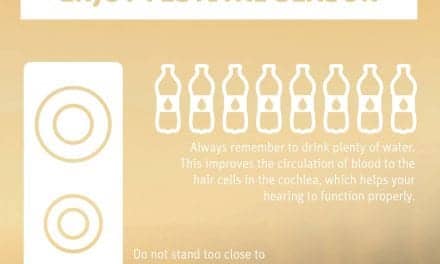 Infographic on Music Festivals and Hearing Loss from Hear the World