Purdue University researchers have found that background chatter causes the ears of those with hearing loss to work differently than those with normal hearing. The findings may lead to improved noise-reduction algorithms in hearing aids.

"When immersed in the noise, the neurons of the inner ear must work harder because they are spread too thin," explained Kenneth S. Henry, a postdoctoral researcher in Purdue’s Department of Speech, Language and Hearing Sciences. "It’s comparable to turning on a dozen television screens and asking someone to focus on one program. The result can be fuzzy because these neurons get distracted by other information."

"Previous studies on how the inner ear processes sound have failed to find connections between hearing impairment and degraded temporal coding in auditory nerve fibers, which transmit messages from the inner ear to the brain," said Heinz, who studies auditory neuroscience. "The difference is that such earlier studies were done in quiet environments, but when the same tests are conducted in a noisy environment, there is a physical difference in how auditory nerve fibers respond to sound."

The researchers measured a variety of physiological markers in chinchillas, some with normal hearing and others with a cochlear hearing loss, as they listened to tones in quiet and noisy environments. Chinchillas were used because they have a similar hearing range to humans, and background noise is used in the study to simulate what people would hear in a crowded room.

"The study confirmed that there is essentially no change, even for those with hearing loss, in terms of how the cochlear neurons are processing the tones in quiet, but once noise was added, we did observe a diminished coding of the temporal structure," Henry said.

The researchers focused on coding of the temporal fine structure of sound, which involves synchrony of neural discharges to relatively fast fluctuations in sound pressure. Both coding of fast fine structure information and coding of slower envelope fluctuations are critical to perception of speech in everyday listening environments.

"When noise was part of the study, there was a reduction in how synchronized the neurons were with the temporal fine structure," Henry said.

The auditory system filters sound into a number of channels that are tuned to different frequencies, and those channels vary based on their frequency tuning. In a normal system, the channels are sharp and focused, but they get broader and more scattered with hearing impairment.

"Now that we know a major physiological effect from hearing loss is that the auditory nerve fibers are particularly distracted by background noise, this has implications for research and clinical settings," said Heinz, who also has a joint appointment in biomedical engineering. "For example, most audiology testing, whether it is lab research or hearing-loss screenings, takes place in a quiet environment, but testing noisy, more realistic backgrounds is necessary to truly understand how the ear is processing sound. This also could influence the design of hearing aids and assistive technologies.

"Designers are often working on improving the temporal coding of the signal, but this research suggests that a primary focus should be on improving noise-reduction algorithms so the hearing aid provides a clean signal to the auditory nerve. Other ways people can reduce background noise include induction-loop hearing systems, which are used in churches and other public settings to provide a cleaner signal by avoiding room noise."

Next, the researchers plan to expand the study to focus on more real-world noises and coding of slower envelope information in sound.

"Additional study is certainly needed, and there are others who are also looking at the role the central nervous system plays, too," Henry said. "But ultimately, we found that hearing loss degrades temporal coding of sounds in background noise in the cochlea, the most peripheral level of auditory processing." 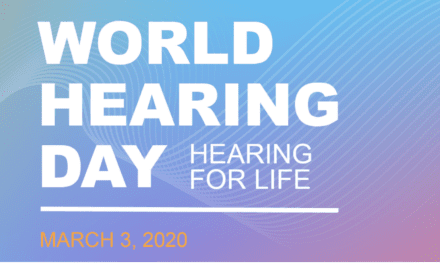