How cochlear dead regions can be identified, what kinds of hearing losses are often associated with them, and why

Editor’s Note: This article1 and the interview that follows2 were originally published in the July/August 2003 (Vol 52, No 4) and March/April 2004 (vol 53, No 2) editions of The Hearing Professional, the official journal of The International Hearing Society (IHS). The articles are adapted and reprinted here with permission.

The cochlea is the “retina of the ear.” It changes sound into electrical impulses, and those impulses are the language the brain understands. Just as dead areas of the retina can create holes in one’s field of vision, dead hair cell areas of the cochlea can produce audiometrically useless frequencies. At these frequencies, hearing aid amplification does little or no good.

Brian Moore, PhD, a Cambridge University researcher in areas of psychoacoustics, has developed a protocol, called the Threshold Equalizing Noise (TEN) test, to clinically identify cochlear dead spots. The most interesting thing about this test is not its clinical utility and how well and consistently it identifies cochlear dead spots. Instead, the best thing about this test is that, in order to understand its rationale and how it works, one is forced to understand how the cochlea works.

Outer and Inner Hair Cell Basics
By way of a brief overview, each cochlea contains one row of approximately 3,000 inner hair cells and 3-5 rows of about 12,000 outer hair cells (Figure 1).

The outer hair cells work in the opposite direction; that is, they receive messages from the brain and from within the cochlea telling them to rapidly stretch or shrink. These test-tube shaped outer hair cells are the active mechanism of the cochlea—the moving parts. Their movements help the inner hair cells sense soft sounds.

Sound hitting the eardrum results in a traveling wave of fluid motion inside the cochlea, thus causing a ripple along the floor upon which the hair cells stand (known as the basilar membrane). The stereocilia of the inner hair cells bend or become sheared where the wave peaks. This is what stimulates the hair cells at the cochlea’s wide base (high frequencies) or narrow apex (low frequencies) or at some unique place in between. In short, the wave grows (and slows) as it goes up the spiral-shaped cochlea until it reaches peak amplitude and stops. By the way, the main reason that the wave actually gets a peak in the first place is because it meets impedance along its travels up the spiral. As it is forced to slow down along its spiral route, its energy has to go somewhere; hence, its peak of “vertical” amplitude.

The wave’s peak is even further defined as a result of the action of the outer hair cells. The stretching/shrinking action of the outer hair cells temporarily alters the basilar membrane on either side of the peak. This mechanically forces the peak into a sharper point that, in turn, increases our ability to distinguish between frequencies that are close together. In someone with outer hair cell damage, the traveling wave peak is dull and rounded, and their ability to distinguish frequencies that are close together is diminished (Figure 2). Is it any wonder that those with sensorineural hearing loss (SNHL) and damaged outer hair cells have difficulty separating speech from background noise?

Why WDRC is Often Recommended
It can safely be said, therefore, that the most common type of damage to the ear is damage to the outer hair cells. This results in the most common type of hearing loss: a moderate SNHL, where soft sounds below conversational speech (50–65 dB HL) are inaudible, yet 90-100 dB HL sounds are perceived as loud as they would be to someone with normal hearing. For this person, hearing aids should amplify the soft sounds significantly and amplify louder sounds by progressively smaller and smaller increments. Wide Dynamic Range Compression (WDRC) hearing aids that accomplish this are specifically intended to imitate what the outer hair cells once did. Outer hair cells begin their work for sounds below 50–65 dB SPL; hence, the knee-point of WDRC is most often found at input levels of around 50 dB, as well.

It must be emphasized, however, that no matter how good a hearing aid is, it cannot restore a normal-functioning cochlear traveling wave (Figure 3). When the sharpened peak of a traveling wave becomes dull, it is dull for good. Hearing aids can only amplify and, by so doing, can only enlarge a diminished traveling wave. They cannot restore one’s original sharp frequency resolution or the ability to separate frequencies that are close together. Amplification only increases audibility of sounds, but does not come close to the majesty and wonder of the healthy cochlea.

An important fact to keep in mind is that the traveling wave is asymmetrical in shape (Figures 2-4). This concept is essential in understanding Moore’s test for cochlear dead spots. The traveling wave has a long tail towards the cochlea’s wide base (high-frequency region) and a steep front that is facing the cochlea’s low-frequency apex. This is our hearing physiology and explains “the upward spread of masking,” or that low frequencies mask high frequencies better than vice versa (Figure 4).

TEN Test Procedures
Moore’s TEN test for cochlear dead spots is available on a CD that can be played over a two-channel audiometer (http://hearing.psychol.cam.ac.uk/dead/ dead.html). The CD plays puretones, as well as a single broadband masking noise (noise that includes all audiometric frequencies). This broad-band noise is quite different from the narrow bands of noise used in our audiometers. The puretones and the masking noise have to be directed toward the same ear, and this can only be done with a two-channel audiometer. One can separately adjust the intensity of the tones and the masking noise by way of the intensity controls on the audiometer and send both to either the right or left ear. You begin by testing for thresholds of the puretones from the CD, and then testing the same ear for thresholds while the masking noise is presented into that ear (ie, ipsilateral masking).

When this article was first published in The Hearing Professional, the TEN test puretones and broadband masking noise were all calibrated in dB SPL, not HL. This is important to note when using the CD. If a client has normal hearing, the thresholds on the typical audiogram will look a bit like a barn roof (Figure 5), with best thresholds showing for the mid frequencies and borderline-to-mild hearing loss appearing for the low frequencies and high frequencies. The reason for this audiogram shape is that normal-hearing ears are most sensitive to frequencies between 1-4 kHz. Incidentally, this is why equalizer buttons on some stereo systems are shaped like a smile; we need the artificial boost for the lows and highs in order to hear all of the frequencies at equal loudness levels. To be sure, there are some complicated calibration issues that would need to be addressed in order to accurately translate the TEN test results to the typical audiogram with which we are all familiar. These, however, are beyond the scope of this introductory article. As of late last year, the TEN test5 is available in calibration of dB HL. This makes it easier to relate test results directly to the audiogram.

Figure 5. Moore’s TEN test on someone with normal hearing. Note that the thresholds from the puretones of the TEN CD produce a convex, “barn-roof” shape. This is due to the calibration of the CD tones in dB SPL, whereas the audiogram is measured in terms of dB hearing loss. Note also, however, that the thresholds masked by 30 dB TEN are only those thresholds that can hear it and not, for example, the worst threshold at 8000 Hz.

For a normal-hearing person, for example, 30 dB of the TEN from the CD should affect most thresholds (Figure 5). If the decibels on the audiogram were in dB SPL, all thresholds would be elevated or shifted to show a flat 30 dB hearing loss. On the typical audiogram (where dB HL rather than dB SPL is used), the barn-roof shaped thresholds for the normal-hearing person are still affected by the TEN. Figure 5 shows that, for any frequency where the broadband TEN is audible, thresholds within the TEN are shifted to at least the intensity of the TEN, so they are simply “pushed lower” down on the audiogram.

Moderate Reverse-Sloping SNHL. Be suspicious of reverse-sloping SNHL, as it could be indicative of low-frequency dead regions. It is very possible that the person could be completely deaf in the low frequencies; however, due to the asymmetric shape of the traveling wave, only a moderate reverse hearing loss may be revealed.

Reverse and Precipitous High-Frequency SNHL
With cochlear dead regions of hair cells, one actually hears by means of remote, living hair cells. This is called “off-frequency hearing.” A small amount of ipsilaterally presented broad-band TEN masking noise would elevate the normal (or better) thresholds in the living hair cell regions. In the reverse loss, it would make the good mid-to-high-frequency thresholds worse; in the precipitous high-frequency SNHL, it would make the good low-to-mid frequency thresholds worse. If the reverse or precipitous high-frequency hearing loss were due to cochlear dead spots, the TEN would, however, also elevate the thresholds for the worst thresholds, even though the TEN would theoretically be inaudible to the person at these frequencies!

Using conventional thinking, we would consider this impossible because, at these thresholds, the listener should not even be able to hear the masking noise. The reason why these thresholds are affected, however, is that, when one has dead hair cell regions at any frequency, one hears tones in these dead areas by means of a small piece of the traveling wave that extends into living hair cell regions. If the TEN masking noise does shift the worst thresholds by 10 dB or more, according to Moore, these thresholds are spurious, and do not actually arise from stimulation of damaged hair cells at these frequencies.4 Instead, in these cases, the worst thresholds arise from indirect stimulation of remote, living hair cells at other frequency regions. Therein lies the rub of Moore’s TEN test!

The implications for amplification are important here; namely, don’t focus on amplification in these extreme high-frequency thresholds. It might be best, in this case, to amplify the low-to-mid frequencies as well as the transition of the audiogram where the thresholds drop.

Summing Things Up
In ears with cochlear dead spots, tones are processed in the dead areas by means of living hair cells located on surrounding regions of the basilar membrane—what Moore refers to as “off-frequency hearing.” Some patients report that these tones do not sound natural or tonal in quality, or that puretone stimulation in these regions gives them the perception of a scratch or a tickle. These subjective reports, however, are not always consistent from person to person, even though dead areas might be indicated.4

The TEN test on the CD is not, in my opinion, a required part of any new test battery for our patients. On the other hand, the presence of reverse hearing loss or precipitous high-frequency hearing loss should make dispensing professionals suspicious that cochlear dead spots might exist. Furthermore, it is a good idea to ask these patients what their perceptions of audible tones presented to their worst thresholds are like. These two items—initial suspicions and secondary questions—might really help in our consideration of how much amplification to provide for a patient’s poorest thresholds. Should we provide low-frequency gain and output for reverse SNHL? For precipitous high-frequency SNHL, should we focus on amplifying the worst high-frequency thresholds or should we concentrate on amplifying the transition or steep slope itself?

Not to be forgotten, of course, is the education of ourselves; that is, understanding the TEN test for cochlear dead spots requires an appreciation for the fascinating way in which our cochleae function.

Hitting for the Sycle 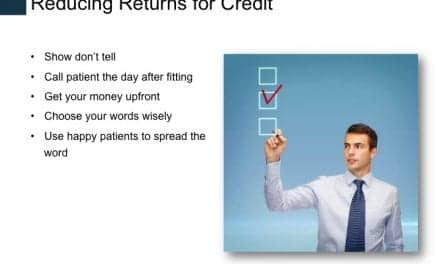