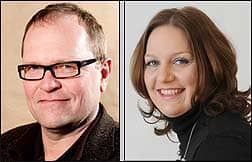 Hearing counseling software that displays audiological concepts while systematically involving the end user can lead to significant improvements in patient understanding. Based on the results of this study, investigations into audiological applications and demonstrations involving the user-centered design process should be more frequently employed.

An essential factor for ensuring patient compliance in health care is to keep patients informed by explaining, in a transparent way, different aspects of treatment that may affect their care. Many studies have shown that patients who are systematically involved in health care services are more motivated in actively contributing to the success of their treatment. Keeping patients informed and empowered helps to improve the quality of health care services by eliminating excessive, deficient, or inappropriate care1 and, thus, contributes to increased efficacy of health care.

To obtain optimum results from hearing aids, the patient’s active cooperation is essential. Patient trust in the hearing care professional is a precondition to a successful counseling, fitting, and rehabilitation process. Explanations provided during counseling are often very technical, and key information on the fitting of hearing aids may not be effectively conveyed to the patient. Failure to provide adequate explanations and information may in some cases lead to patients abandoning the rehabilitation process and not receiving the hearing aids they require.

Markus Meis, PhD, is head of the department for Market and Effects Research at Hörzentrum Oldenburg GmbH, and a part-time lecturer in assistive technologies at the Jadehochschule Oldenburg (University of Applied Sciences). Simone Siltmann is audiology and software product manager at Sona Hearing AG, Staefa, Switzerland, and is a trained hearing aid acoustician, holding a Dipl Ing degree in Hearing Technology and Audiology. Correspondence can be addressed to HR or Simone Siltmann, Dipl Ing, at .

A study by Meis and Gabriel2 showed that over 40% of patients (n=190) at the start of the fitting and counseling process do not have sufficient information about hearing aid technology, hearing impairment, and the fitting process. This only changes once the patient is at the actual fitting stage. Patients need to be clearly informed in understandable terms from the outset—ideally at the first consultation—to increase their acceptance of medical devices and create a positive attitude.

The Sona Hearing patient screen (ie, client:view) presented in this article is designed to:

The patient screen was designed and developed in consultation with patients with hearing loss to ensure that the correct audiological information is provided in a user-friendly manner.

User-centered design (USD) is now a widely accepted concept within the multimodal human machine interface (HMI) ergonomic software field. Product prototypes are used in development projects for hardware or software to enable developers and target groups to communicate with one another and to ensure that future users can give feedback, even while the product is in the early stages of development. Producing prototypes allows a design to be evaluated and findings to be fed back into the development process. Additionally, a USD process is applied with design solutions developed on the basis of user requirements, then implemented in prototypes for evaluation purposes.3,4

A prototype client screen was produced as a basis for patient interviews. This prototype was developed at a conceptual level using a PowerPoint presentation that was then assessed by users. The results and improvements suggested by users were channeled into the development of the current patient screen within the Sona fitting software (sona:fit).

Subjects. A total of 16 hearing-impaired subjects (10 males, 6 females) from Hörzentrum Oldenburg GmbH participated in the study, with 8 participants being first-time hearing aid users and 8 subjects being people who had never visited a hearing care office (non-wearers of hearing aids). The mean age of subjects not wearing hearing aids was 62.7 (range 49 to 74 years) and the mean age of first-time users was 69.2 (range 65 to 79 years). For subjects wearing hearing aids, mean duration of usage was 2.4 years (range 4 months to 6 years).

Research execution. The prototype of the client screen was displayed as a PowerPoint version presented to the client by experienced audiologists and hearing care professionals as part of a simulated fitting session on a 17-inch monitor. The client screen displayed the following elements:

Figure 1. General acceptance of the patient screen, scale from “1” = “no acceptance” to “5” = “very good acceptance” (only those categories [3 to 5] that received a rating are shown).

The rough concept was first presented in an “out of the box” test format and rated by the subjects. The initial assessment measured the spontaneous acceptance of the concept of a patient screen. This phase was deliberately placed at the start of the session to ensure subjects did not focus on the details, which were rated later, and instead considered the basic strengths and weaknesses of a patient screen.

The individual elements of the patient screen were then discussed more intensively. This involved presenting variants of the different elements (ie, welcome, significance of hearing impairment illustrations, color scheme, portrayals of individual hearing loss, various forms and classes of hearing aids, and the illustration of feedback measurements and other graphic elements) to subjects who provided comparative scores for the variants. Multimedia depictions of fittings, combining sounds and graphic representations, were also presented and rated.

These evaluations were analyzed with respect to current hearing rehabilitation, which demonstrated that general acceptance of the patient screen among subjects not wearing hearing instruments was greater than that among the first-time users (Figure 1).

The reason given by subjects for their comparatively high acceptance rate was that the concept ensured they were systematically and effectively involved in the fitting process. They emphasized that the illustrations correctly portrayed the dispensing professional’s explanations, making the various elements of the consultation more memorable.

Figure 2a-e. Representing hearing loss. In terms of understandability, patients ranked them, best to worst, as A, D, E, C, B.

Five participants reported weaknesses in the concept. In addition to the details below, fears were expressed that the monitor-led dialogue might, in some situations, lead to less discussion with the hearing care professional, and that some of the illustrations might be a distraction during the fitting process.

A total of 14 out of 16 subjects felt that hearing care professionals using the client screen concept as presented would have a competitive advantage over rival hearing care businesses. The main reasons given for this was that the concept leads to more explanation about the hearing aid fitting, greater trust, and a closer relationship with the client, particularly with those consulting a hearing care professional for the first time. There were no differences between the subjects wearing hearing instruments and those not wearing hearing instruments in ratings of competitive advantage.

A major aspect of the evaluation was the rating of illustrations of individual hearing loss. Figures 2a-e show the different versions of the audiogram display. Preference rankings (1 to 5) showed that version A (hearing loss in categories) was given the highest rating by 31% of subjects and the second-highest rating by 50% of subjects. For version A, understandability was rated as either “very” or “quite understandable” (scale of 1 = “very understandable” to 4 = “very difficult to understand”; 1.5 ± 0.6), and was given a better (ie, lower) rating than all other versions (version B: 3.2 ± 0.4; version C: 2.0 ± 0.7; version D: 1.8 ± 0.9; version E: 1.9 ± 0.8).

Surprisingly, it was the particular frequencies within Fant’s speech area—known as the “speech banana” (the English vowel and consonant area on an audiogram)—that were rated “quite difficult to understand.” In the preference ranking, version C (capacity to hear sounds) was ranked as the second-best version (ranking 1: 44%, ranking 2: 13%), although it was only ranked fourth for understandability. Along with the speech banana, version E (audiogram by age class) also received a relatively poor rating.

The portrayal of the BTE version of the sona:vogue hearing aid (sona:vogue micro) and the modular CIC version (sona:vogue intro) indicated that subjects wanted to see the hearing aid in the ear of the model so it could be easily recognized, regardless of how it was portrayed (by photograph or diagram).

The concept of the client screen was rated positively based on the prototype. The main reasons for this high acceptance were related to the fact that clients were systematically involved in the first consultation. Providing information in a client-oriented format also contributed to the comparatively good ratings, suggesting that, despite the relatively small sample size (16 subjects), this approach could lead to greater client compliance.

Based on all previous experience, any major concerns would have come to light even with such a small sample. The results also suggest that using a client screen may in some cases give hearing care professionals a competitive advantage even if no market results are as yet available.

Ratings for individual elements of the client screen prototypes do not show significant differences between first-time users and subjects who do not wear hearing instruments (or have never visited a dispensing office), indicating that there is no justification for developing client type-specific versions. However, there are some indications that the patient screen is particularly positive for patients who did not yet go through hearing rehabilitation.

The detailed results on the graphical elements revealed some weaknesses in the prototypes/versions presented. These included some symbols, comments, and instructions that were either partly recognized or not recognized at all (eg, hearing aid functions, icons in the hearing loss diagram, illustrations of the hearing aids in the ear, etc). This patient feedback has been automatically fed into further development. For example, the audiogram diagrams have been reworked and sorted to reflect their preferential rankings. The hearing aid in the patient ear is no longer portrayed in photographs or diagrams but in a video in which the patient-worn hearing aid can easily be seen from a number of different angles. The classes of hearing aids are also displayed using the preferred iconography.

Systematically involving users led to a significant improvement in the client screen. Based on the results of this study, investigations into audiological applications and demonstrations involving the user-centered design process with future users should be more frequently employed. This process is already routine for end users when developing medical devices in relation to usability (cf. DIN EN IEC 62366 and DIN EN IEC 60601-1-6),5 and is systematically used to improve medical devices over the long term.

This paper is adapted from an article that first appeared in German in the February 2011 edition of Hoerakustik, published by Median-Verlag, Heidelberg, Germany, and appears here with permission. The authors and HR thank Hoerakustik for their kind assistance in republishing the material.