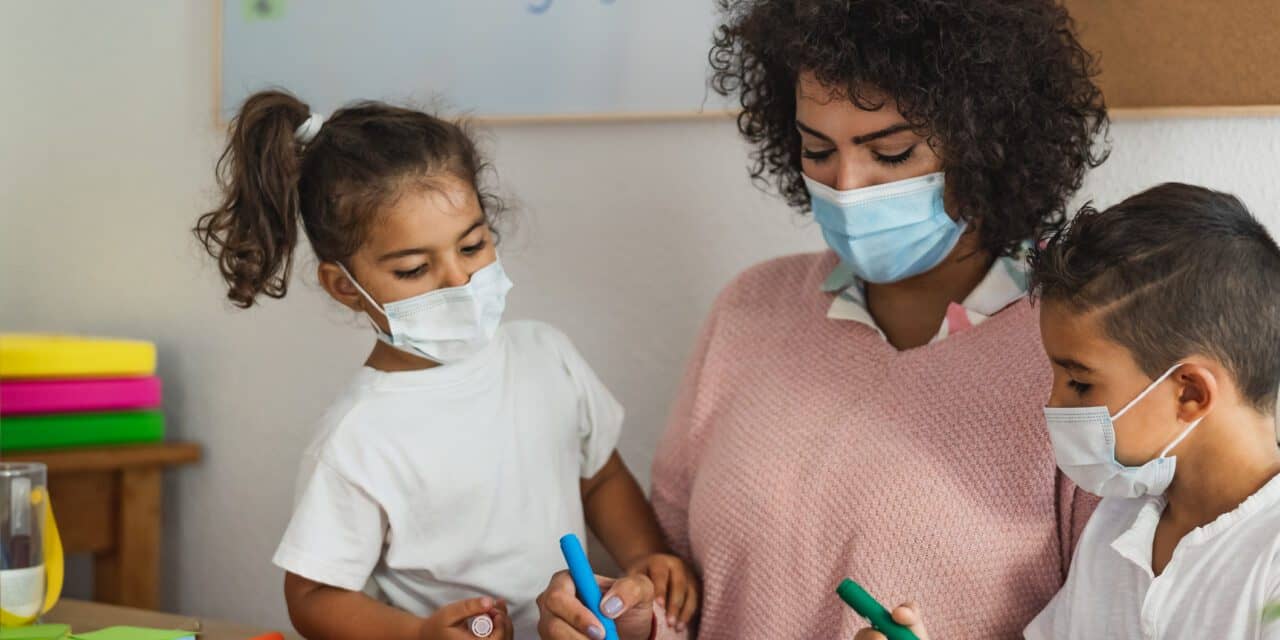 A team of psychology researchers observed that young children produce the same amount of early language whether or not they are wearing masks. Another finding showed that kids produce more complex speech sounds while wearing masks than without them.

Wearing a mask in school does not hinder a young child’s ability to learn language, even if they have hearing loss, according to new research from a team of University of Miami psychologists, that appears in an article on the University of Miami’s website.

Researchers compared two classes of three- and four-year-old children from the University’s Debbie Institute preschool—one in early 2020, before the COVID-19 pandemic began, and then a year later, when masks were required for children over the age of 2, said associate professor of psychology Lynn Perry, one of the study’s authors. To monitor language in the classroom, the research team had the students and their teachers wear a small vest adorned with a Language Environmental Analysis device, which tracks the number of language sounds coming from the person wearing it.

After multiple visits and careful analysis, results showed that there was no change in the children’s ability to learn and produce language whether or not the students and their teacher were wearing masks. The researchers, whose work is funded by the Institute of Education Sciences and the National Institutes of Health (NIH), have been invited to submit the forthcoming study to a special issue of Frontiers in Psychology.

“We didn’t find any negative effect of mask use on children’s own language production,” said psychology doctoral candidate Samantha Mitsven, who is the lead author on the study. “There was no difference in the number of vocalizations that children were producing when they were required to wear masks compared to when they were not wearing masks.”

Another surprising finding that they uncovered was that children were producing more complex speech sounds while wearing masks than without them. This suggests that masks do not lower the quality of children’s speech, Mitsven added.

“Initially, some people worried that masks would make it harder for children to hear others and to be heard,” Perry said. “But this research suggests that kids are still being heard . . . and that they are still benefiting from the language they are exposed to. So, maybe they were talking a little louder or teachers may have provided additional supports to help children be heard, but they are definitely able to communicate in the classroom—even with those masks on.”

In addition, the research team made a point to include children in the study with hearing loss—who wear hearing aids or cochlear implants for assistance—and who often exhibit early language delays. While they anticipated that mask wearing might affect these students most, Mitsven pointed out that they also found no difference in the amount of language spoken among students with hearing loss when they were required to wear masks compared to when they were not wearing masks.

“This suggests that children who are at risk for language delays and would really benefit from being in preschool can do so safely without any effects on their language learning,” Perry noted.

According to the study’s authors, the results could be applied to older students too, although more research is needed to determine whether this is the case.

“It was comforting for us to know that [young] kids can be in school, communicating with their teachers and friends, and still be safe at the same time,” Perry said.

Research indicates that the ages between 3 to 5 years old are a significant period for early language development, and that is why the research team on this study, which also includes psychology professor Daniel Messinger, researcher Christian Jerry, and graduate student Stephanie Custode, initially focused on this age group. Through ongoing research, they hope to learn more about the interactions and language development of preschoolers in this age range.

“This is really a critical age where we want to be sure they are getting high-quality language opportunities to be set up for success in kindergarten,” Perry explained.

The team’s efforts are also expanding to include pre-kindergarten classrooms in Miami-Dade County Public Schools with students from a variety of backgrounds. Future publications will delve into the impact of teachers on their students’ language development, as well as how a child’s interactions with their peers can influence their language skills.

“Since mask-wearing is the new reality, we have to understand it because that may be one of the contexts in which kids today are going to be developing,” Messinger said.