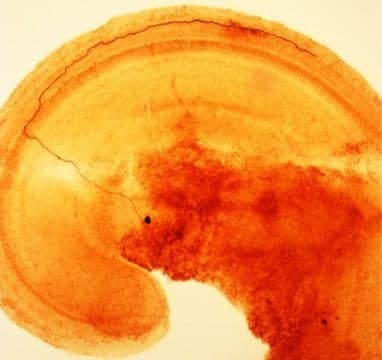 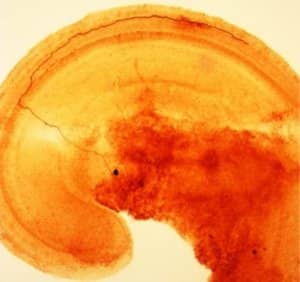 A segment of the inner ear of a rat, showing a type II afferent nerve cell (brown).

According to new research from Johns Hopkins University School of Medicine, some nerve cells in the inner ear can signal the brain about tissue damage in a way similar to pain-sensing nerve cells in the body. If the finding, discovered in rats, is confirmed in humans, it may lead to new insights into hyperacusis, an increased sensitivity to loud noises that can lead to severe and long-lasting ear pain.

An article on the study appeared online in the November 9, 2015 edition of the journal Proceedings of the National Academy of Sciences. The research team’s discovery came as a result of their interest in finding out the purpose of this small subset of afferent nerve cells — nerves that take information from the inner ear to the brain — and why they were not very good at relaying sounds. 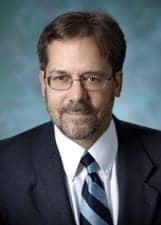 According to Paul Fuchs, PhD, professor of otolaryngology-head and neck surgery, neuroscience and biomedical engineering at the Johns Hopkins University School of Medicine, he and his team knew that these type II afferents connect to specialized sensory cells in the ear of mammals, and that these so-called outer hair cells amplify the sound waves that enter the inner ear, giving mammals very sensitive hearing over a wide range of frequencies.

Fuchs says that the ATP released by the supporting cells is probably what gets the neurons to fire, and the supporting cells might release ATP in response to ATP that leaks out of the ruptured outer hair cells. But he noted that outer hair cells don’t have to rupture to release ATP. Progressive damage caused by loud noises or other stress is enough to increase ATP levels in the fluid of the inner ear. The research team explains that it is possible that over evolutionary time, such a mechanism could have evolved to help mammals avoid further damage to their hearing. Such effects might depend on heightened sensitivity of the type II neurons after trauma, akin to the heightened sensitivity of pain-sensing nerves in damaged skin. Hypersensitivity to loud sound (hyperacusis) is a paradoxical consequence of hearing loss in many people. Everyday noises such as slamming doors, clanking dishes, and barking dogs can become irritating, and even painful.

Studies of pain-sensing nerve cells elsewhere in the body can help guide future studies–a compound that suppresses pain-sensing nerve cells elsewhere also prevented type II afferent neurons from firing in response to outer hair cell death. At present, Fuchs cautions, this is a restricted experimental result that simply provides a “proof of concept” for treating pain associated with inner ear damage. And the Fuchs laboratory plans to explore this question in their ongoing research.

“We are still a long way from being able to treat hyperacusis,” said Fuchs. “Our results suggest that cells called type II afferent neurons are similar to pain-sensing neurons in the rest of the body, so lessons about interventions elsewhere could apply to the ear, too.” 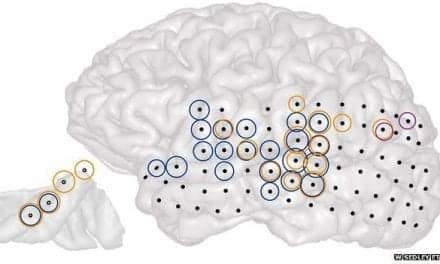