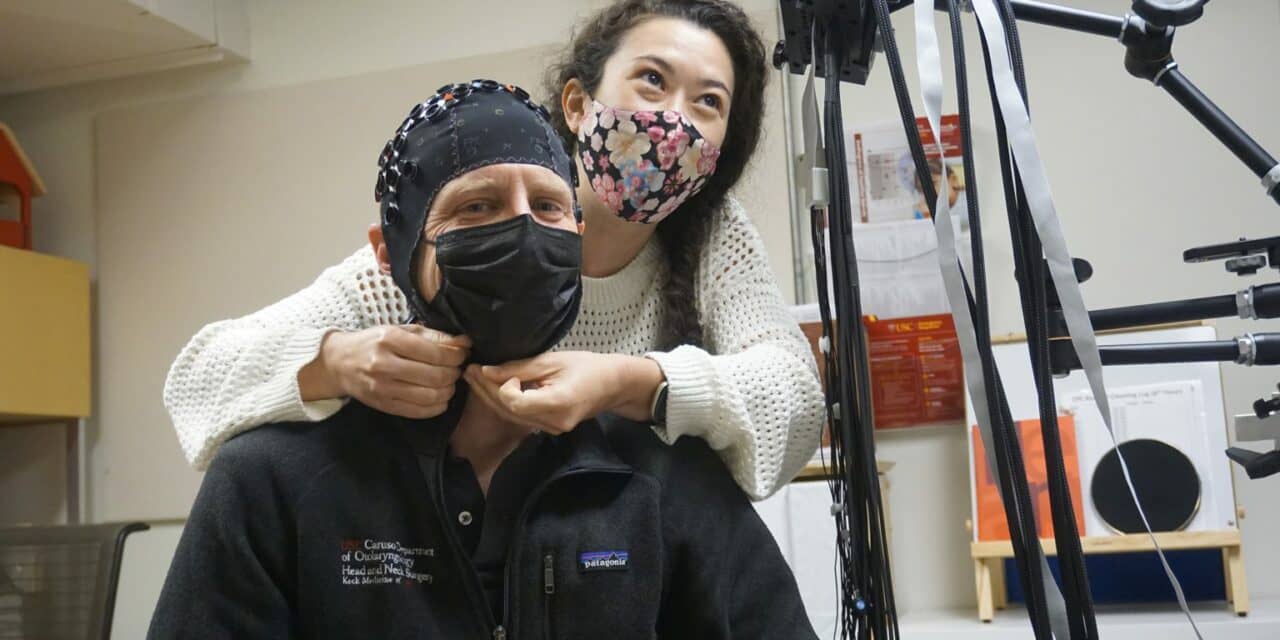 Dr Raymond Goldsworthy, head of the Bionic Ear Lab in the USC Caruso Department of Otolaryngology-Head and Neck Surgery, understands the importance of music listening. He lost his hearing at the age of thirteen, just as he was beginning to learn the drums. Like every teenager, he was just beginning his journey into the seemingly limitless world of music, when a bout with spinal meningitis and the ensuing treatment damaged his hearing. An article detailing his story appears on the Keck School of Medicine website.

“There is never a good time to lose your hearing, but what was particularly challenging for me at that age was that my friends were discovering new music,” Goldsworthy remembers. “It hurt that I could not turn to music for comfort during that time.”

He received a cochlear implant, then a relatively new technology that has since become a life-changing device for hundreds of thousands of hard-of-hearing people. Cochlear implants are sound processors that sit behind the ear, catching sound and transmitting it via electrodes that stimulate the auditory nerve. The result is an approximation of hearing that, while perhaps less precise than an average person’s, can help restore a remarkable degree of ability when hearing loss has progressed to the point that a hearing aid is no longer useful.

And, as Goldsworthy and his researchers at the Bionic Ear Lab have shown, technology and music listening can always be improved.

As a music enthusiast and a musician, Goldsworthy and his team have spent years researching ways to improve the experience of music for cochlear implant users. Their most recent paper (available here), which was co-authored by graduate student Andres Camarena and medical student Grace Manchala, set out to examine exactly how cochlear implant users perceive harmonies.

They did this by setting up an at-home test via a web app, which played two notes together at a time and asked participants to rate what they heard on a scale of pleasantness. The study not only compared cochlear implant users to normal-hearing listeners, but also captured the participant’s musical sophistication — how much they knew about music, how much they’d studied music, their own musicianship.

The findings of the study were astonishing. While average cochlear implant users indeed had a much rougher perception of pitch changes than the average listener’s (the former were able to hear pitch changes of about 10%, compared with an average listener’s 1%), the highest-performing cochlear implant users were able to distinguish pitch differentiation at about the same rate as average users. More surprising still, the thing that seemed to differentiate ability to hear differences in pitches most among cochlear implant users, aside from the technological issue of being able to hear small modulations in the stimulation that allows the user to hear, was musicianship and musical sophistication.

“The science did naturally follow the observations drawn from the music hour,” Goldsworthy observed. “We were able to design a listening experiment to carefully characterize harmony perception and to connect that to musicianship.”

“Our research aims to carefully characterize music perception for cochlear implant users. The more precisely we characterize music perception, the better we can improve sound processing for further improvements,” Goldsworthy said. “I am excited to work with a vibrant team to broadly improve music appreciation for cochlear implant users.”

The Bionic Ear Lab is looking for more people to get involved with hearing research at USC, both cochlear implant users and people with normal hearing for comparison. Reach them at: [email protected].

Structure of Inner-Ear Protein is Key to Hearing and Inherited Deafness, Says Study