Learning words may be facilitated by early exposure to auditory input, according to researchers at the Indiana University School of Medicine, Indianapolis.

A growing body of evidence points to the importance of early auditory input for developing language skills, say the researchers. Indiana University Department of Otolaryngology researchers have contributed to that evidence with several projects, including their study involving 20 deaf children (22- to 40-months-old and 12 to 18 months after cochlear implantation) and 20 normal-hearing children (12- to 40-months of age).

"This research is significant because surgery at very young ages requires more expertise," said Houston in a statement. "It is important to know if the increased benefit of early auditory input warrants surgery at younger ages."

FDA guidelines approve cochlear implantation at 1 year of age, although many children are implanted as young as 6 months of age.

Houston said the research showed that deaf children’s word-learning skill was strongly affected by their early auditory experience, whether that experience was through normal means or with a cochlear implant. Children who received the implant by the age of 13 months performed similarly to their normal-hearing counterparts while children who received a cochlear implant later performed, on average, more poorly than their normal-hearing peers, he said.

Adding to the evidence that early auditory input is important was the finding that children who had some level of normal hearing early in life, before cochlear implantation, exhibited word-learning skills similar to the early implanted children, Houston said.

"Taken together, the findings suggest that early access to auditory input, even if the access to sound is quite impoverished, plays an important role in acquiring the ability to rapidly learn associations between spoken words and their meanings," Houston added.

The team used the Intermodal Preferential Looking (IPL) paradigm to investigate the language ability of the children. The IPL paradigm requires the child to listen to a repetitive noun while looking at an object. The child continues to look at the screen that displays the original object and a second object while the speaker repeats the word associated with the object. A hidden camera records the movement of the child’s eyes to see if he identifies the correct picture with the object’s correct name.

Houston and his colleagues are collaborating with other cochlear implant centers to launch a study with more children to continue the investigation into the effects of early auditory experience on word learning.

The research was funded through grants from the National Institute for Deafness and Other Communication Disorders and the Deafness Research Foundation. 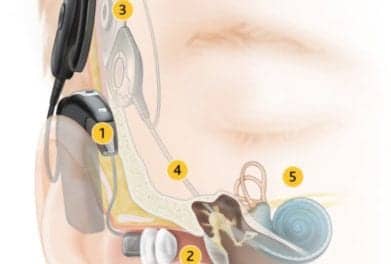