Brain’s Hearing Center May Reorganize After Implantation of Cochlear Device

LYON, France—New research suggests that cochlear implants may restore normal auditory pathways in the brain even after many years of deafness. The results imply that the brain can reorganize sound processing centers or press into service latent ones based on sound stimulation.

Jeanne Guiraud, PhD, and colleagues at the University of Lyon, Edouard Herriot University Hospital, and Advanced Bionics, the maker of cochlear implants, worked with deaf subjects from 16 to 74 years old and found that younger subjects and those with a shorter history of deafness showed changes that mirrored patterns in people with normal hearing more closely. The results have been published in the July 18 edition of Journal of Neuroscience.

“The results imply a restoration to some extent of the normal organization through the use of the cochlear implant,” says Manuel Don, PhD, of the House Ear Institute in Los Angeles. “They also claim to find ties between the degree of restored organization and a hearing task. Such ties are of enormous importance in evaluating cochlear implant benefits.” Don was not involved in this study.

Guiraud and her team studied 13 profoundly deaf adults who had received cochlear implants, on average, eight months before the study. Electrical stimulation to the ear allowed the team to locate where in the brain’s auditory cortex various frequencies were processed and come up with a map for these tones. Their results demonstrated that in people who had cochlear implants for at least three months, normal frequency organization was somewhat restored.

“Our results strongly suggest that the recipient’s auditory cortex presents a tonotopic organization that resembles the frequency maps of normal-hearing subjects,” says Guiraud.

In the future, the team hopes to determine in detail the ways in which these maps may change as a result of cochlear implants by studying subjects immediately following implant surgery. 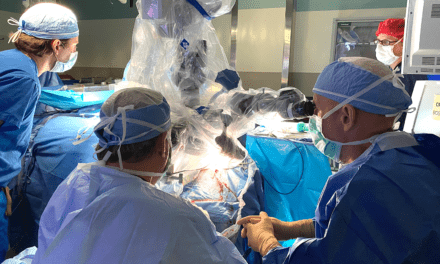