Costco senior vice president Richard Chavez, when asked in an article by Bloomberg Businessweek’s Kyle Stock (July 11, 2013) just how much hearing aid revenue Costco receives, stated “A lot. We’re now one of the largest—if not the largest—hearing aid distributors in the market, but I really don’t want anyone to know that.”

While it might have been an off-the-cuff statement, it is confirmation of something most hearing care professionals and industry experts already know: Costco has made major inroads and is influencing the hearing aid market in no small way. According to the report, Costco hearing aid sales have grown by an annual average of 26%, and Chavez expects them to grow by 19% in 2013. Similarly, the number of Costco stores has increased from less than 100 to about 500 in the last 10 years. The company has a total of 627 stores in the United States.

In conversations with hearing industry marketing experts, one key limiting factor in Costco’s growth is shared with virtually every other large hearing aid manufacturer and distributor: the inability to find and recruit dispensing professionals. The company has been on a recruiting campaign for several years, and also has invested substantially in the training and promotion of promising individuals within their company’s ranks to become dispensers. The Bloomberg article says Costco now has some 125 workers in “hearing aid training.”

Costco’s hearing aids, including its private-label Kirkland brand, have a price range from about $500 to $1,500—well below the average hearing aid price of $2,000 to $3,000. In truth, Costco’s dispensing model is one that is difficult to grouse about: quality hearing aids at competitive prices dispensed by trained professionals. Chavez states in the article that the next goal of Costco is to gain hearing aid purchases from younger people: “The [hearing] industry has done a great job telling people hearing aids are for the old and disabled. The Holy Grail is in how we can get them to come in earlier,” he says.

SAM’s and Wal-Mart. The Bloomberg article also mentions SAM’s Club, the nation’s 8th largest retailer by annual net sales, as another presumably fast-growing big-box retailer that is dispensing hearing aids. There are about 620 SAM’s Clubs in the United States, with 47 million members, and HR estimates that about 200 of these stores offer hearing aids. Similar to Costco’s pricing model, SAM’s advertises that its hearing aids can be purchased for “averaged savings of 33% vs traditional retailers” and their hearing aids are dispensed by licensed professionals.

On the other hand, SAM’s parent company, Wal-Mart, has recently drawn the ire of the Texas dispensing community for the sale of over-the-counter (OTC) hearing aids through its in-store pharmacies without consumers first receiving a hearing evaluation—a violation of the Texas law. Hearing care professionals are petitioning various departments in the State of Texas to get them to stop, and one group has proposed a class-action suit against Wal-Mart unless it hires licensed professionals and thus plays by the same rules (and with the same overhead) as everyone else. Similar to most PSAP manufacturers, Wal-Mart appears to be citing Federal law, which preempts state law, supposedly allowing adults to sign a waiver for a medical examination prior to obtaining hearing aids. For more information, see HR’s online news.

But getting back to the question: Has Costco become the king of US hearing aid retailers? It’s not likely. While Costco has made very impressive market gains in hearing aid sales, it’s hard to believe they are the #1 retailer in the United States when one takes into account the world’s largest hearing aid distributor Amplifon, which owns Miracle Ear, Sonus, HearPO, and the Elite Hearing Network. Similarly, Beltone reports it has 1,500 offices in North America, and there are several other large chains and networks.

But Mr Chavez’s off-the-cuff remark isn’t wildly out of line: Costco has become a major distributor in the US hearing aid market. Also difficult to dispute is the fact that, for better or worse, as big-box retailers and pharmacies delve into the many and diverse corners of healthcare (eg, 1-minute clinics), they will play an larger role in the future of the hearing industry.

An “official welcome” to Dr Chasin. New with this edition of The Hearing Review is a monthly column by Marshall Chasin, AuD, the owner of Musicians Clinics of Canada and a long-time contributor and Editorial Advisory Board Member for HR. Dr Chasin’s Back-to-Basics column (page 12) will look at our knowledge of acoustics, music, hearing evaluation, fitting methods, and (knowing Marshall) much more. It seems strange to “welcome Marshall to these pages,” since he has authored so many articles for HR and served as a guest-editor on three different occasions. But our staff is very thankful for all his work and his willingness to share his immense range of experience and talents with our readers in his new Back-to-Basics column. 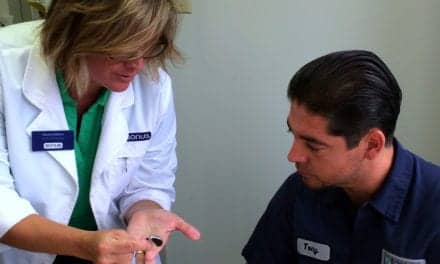