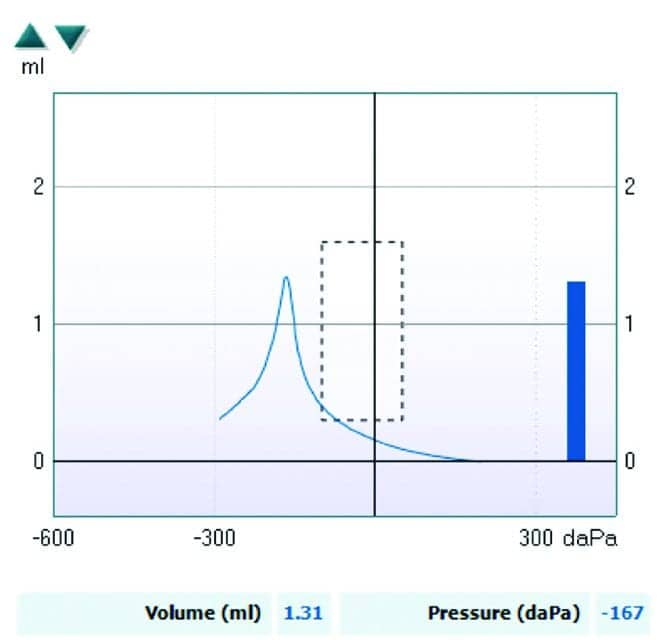 A quick literature review and case study about the advantages of using pressurized OAEs given the presence of negative middle-ear pressure.

Otoacoustic Emissions (OAEs) are naturally occurring responses, which have significantly added to our audiometric screening and diagnostic ability. OAEs result from mechanical vibrations of the outer hair cells (OHCs) within the inner ear.1 OAEs travel in the opposite direction of the environmental sounds from which they originate. That is, environmental sounds travel from the ear canal to the tympanic membrane (TM), the malleus, incus and stapes, and into fluid-filled cochlea where the outer hair cells are stimulated. OAEs travel the opposite path, from the OHCs through the fluids of the cochlea, to the ossicles, and the TM, and are measured acoustically in the ear canal. Therefore, given a healthy peripheral auditory system, as described above, the OAE can be thought of as reflecting the status of the peripheral auditory system—and importantly, it verifies that the OHCs have received and reacted (vibrated) to sound.

The most common hearing losses are sensorineural hearing loss (SNHL) associated with aging (ie, presbycusis) and noise-induced hearing loss (NIHL). In both cases,  as hearing loss increases, OHCs are damaged and they fail to receive and react to sound. Given that failure of response, there is no OAE to be recorded in the external ear canal. Likewise, in the presence of a conductive hearing loss (CHL) due to causes such as otitis media, a cerumen-occluded ear canal, or a disarticulated ossicle, although the environmental sounds may be loud enough to be perceived, the OAE may not effectively be sent back towards the recording microphone in the external ear canal. In general, as the CHL increases, the likelihood of recording an OAE decreases.

These phenomena are indeed useful as a normal OAE indicates (grossly) the entire peripheral auditory system is responsive and working. That is, if we record normal OAEs at multiple frequencies, we can essentially assume the ear canal is clear, the tympanic membrane, as well as the malleus, incus, and stapes are intact and mobile, and the cochlea is responding.

As such, OAEs can be used as a screening test for hearing. Of note, OAEs cannot completely assure “normal hearing,” as problems can occur medial to the cochlea (ie, acoustic schwannoma, brainstem infarct, etc) which would present with a normal OAE, even though the more central auditory pathway is not functioning properly.

There are many different stimuli used to evoke an OAE, the two most common being clicks and pure tones. In general, Transient Evoked Otoacoustic Emissions (TEOAEs) are evoked using a broadband click stimulus (similar to ABR) which reveals a gross, repeatable response. Conversely, Distortion Product Otoacoustic Emissions (DPOAEs) result from two tones (f1 and f2) delivered in a calculated and calibrated fashion (fixed spectral and loudness characteristics) across a range of tones yielding a distortion product, which is measured in the ear canal.

Marshall, Heller and Westhusin4 in 1997 reported, “For long-term monitoring of TEOAEs, middle ear pressure either should be near ambient pressure or should be compensated for by an equivalent pressure in the ear canal…” Indeed, Marshall and colleagues determined negative pressure as slight as -31 to -65 daPa “significantly changed the TEOAE spectrum…”

Hof et al5 in 2005 reported middle-ear pathology can have a negative effect on OAEs.  They wrote, “a pressure difference between the middle ear cavity and the ear canal may attenuate the transmission of sound through the middle ear…” Their study evaluated 59 children and made two OAE measurements: the first with natural (uncompensated) ambient pressure, and the second with compensated middle ear pressure. They determined that with compensated middle-ear pressure, the TEOAE response increased by roughly 2 dB.

Hof and colleagues5 reported the largest increases were statistically significant in TEOAE amplitude at frequencies around 1 and 2 kHz, while at 3 and 4 kHz, there were essentially no significant changes in OAE responses, attributable to pressure compensation. They concluded that equalizing the middle-ear pressure via alteration of pressure in the external ear canal “may increase TEOAE amplitudes.” They also noted this would be beneficial for children with negative middle-ear pressure, as it would allow the clinician to quickly evaluate compensated OAEs, to help rule out a SNHL. 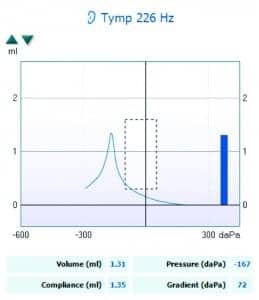 The following case study shows the value of performing OAEs at peak pressure versus ambient pressure. 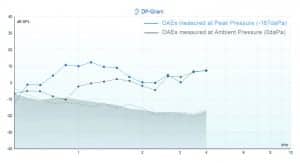 Figure 2. Recorded DPOAEs between 500-4000 Hz using the Interacoustics Titan at ambient pressure (0 daPa) and at the peak pressure (-167 daPa).

DPOAEs were recorded between 500-4,000 Hz (Figure 2) using the Interacoustics Titan at ambient pressure (0 daPa) and at the peak pressure (-167 daPa) recorded during the tympanometry measurement.

In agreement with the literature,6 a remarkable improvement in the amplitude of the pressurized OAE response can be seen at the frequencies below 2 kHz. According to Sun and Shaver, “the variation in DPOAE change in the middle to high frequency range implies multiple resonances of the middle ear system.”7 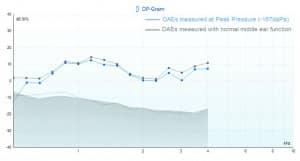 Figure 3. The DP-Gram above shows the OAEs recorded at peak pressure (pressurized) during the presence of negative middle-ear pressure (-167 daPa) and again when the patient had normal middle-ear function (Type A tympanogram – MEP = 0 daPa).

The ability to perform pressurized DPOAE and TEOAE testing, using a commercially available product, in the everyday clinical setting was made possible by Interacoustics on the Titan in 2013. The Titan is a multifunctional screening and/or clinical device featuring the essential test procedures of impedance, wideband tympanometry, DPOAE, TEOAE, and automated ABR testing with the CE-Chirp®. It interfaces via USB or wirelessly with integrated audiologic software modules on a PC. It can also be operated as a standalone handheld device.

This case study, along with the published literature, highlights reliable pressurized OAE measurements can be recorded in patients with negative middle-ear pressure, which reflect the original OAE in the presence of normal middle-ear function, with just a minimal deviation.

Although research on this topic is limited, the referenced articles and the authors agree there are advantages for using pressurized OAEs given the presence of negative middle-ear pressure. The ability to verify the presence of OAEs, given a non-idealized middle-ear environment, is a significant step forward regarding diagnostic ability, thus facilitating better, and more appropriate, treatment options.