Wireless streaming of sounds has revolutionized sound therapy for tinnitus patients by enabling them to select the sounds they prefer based on any number of factors at the press of a button. Combined with the ability of hearing aids to generate tinnitus relief sounds, sound therapy solutions for tinnitus management have never been more flexible. In 2011, ReSound launched a line of hearing instruments, which for the first time allowed direct wireless communication between a sound source and a hearing instrument. This article discusses innovative ways of using sound therapy with modern technologies.

“Mary had a little lamb. Its fleece was white as snow.”

These were the first words recorded and played by Thomas Edison in 1877 when he invented the phonograph. The phonograph allowed speech to be both recorded and played back, allowing humans to not only capture sound, but also to listen to it at their leisure. As shown in Figure 1, this invention was followed one year later by the first recorded album, Yankee Doodle, by Jules Levy. These pioneering steps have led us to the modern world of sound flexibility and personalization, allowing us to choose what sounds we listen to that will match our mood, environment, and/or preference at any particular moment.

Over time, technology has provided us with increased flexibility for personalization of what sounds we can choose to introduce into our lives. Probably the greatest achievement in terms of use of recorded sound for sound therapy was the introduction of the MP3 player in 1998 that allowed for downloadable content. This technology has since been expanded with the introduction of devices like the iPod and smartphones, allowing users to store large quantities of data in one hand-held device, providing an almost unlimited selection of sound therapy options at the press of a button.

Take a moment, and think of your favorite song. Now, imagine having to listen to it over and over again for 6 months to a year. Chances are your favorite song might soon become annoying or disagreeable to hear after a period of time, and might not yield the pleasing effects it once had. The case is the same for tinnitus patients and sound therapy. If they are locked into always listening to the same limited selection of sounds, the effectiveness of those sounds over time may diminish.

In fact, part of the Progressive Tinnitus Management (PTM) protocol states that “Tinnitus management must be adaptable to clinicians’ preferences and to address patients’ individualized needs over time.”1 A sound that might be considered helpful at one point in the tinnitus management program, may not be as helpful later on. Certain sounds may be experienced as pleasing or soothing, but after repeated use, may no longer be perceived in the same way. Additionally, sometimes a patient can simply habituate to a sound, which makes it less effective in providing tinnitus relief or distraction from tinnitus over time. Finally, the situation that the person is in can influence which sound they prefer.

Mindfulness-based tinnitus stress reduction focuses on being present in the moment and embracing one’s tinnitus as part of one’s being, rather than rejecting it.2 It also suggests that sound therapy preference is constantly evolving for the patient, as the person may require different types of stimulation over time. This suggests the importance of having the technology that allows for such flexibility.

In addition, creative and innovative thinking in how the technology can be applied can help patients where conventional methods are not enough. Sound therapy can be used in a variety of ways to help enrich one’s acoustic environment. For example, depending on the time of day, or the environment one is in—such as work versus home—a particular sound source might be preferred over another. With hearing aids that can generate tinnitus relief sounds and wirelessly connect to audio sources, the flexibility for sound therapy is greater than ever before, and allows for true customization of any tinnitus management program.

What Sounds Are Best for Tinnitus Management?

There does not appear to be a “holy grail” for sound therapy in tinnitus management. In other words, no one sound will be able to provide relief across the board for all people over a long period. Not only will many people habituate to a particular sound after repeated use, but many people prefer different sounds for different situations. For example, when at home, someone may prefer to listen to some of their favorite music to distract them from their tinnitus. However, this same music may be distracting if used during dinner at a restaurant while trying to have a conversation.

The literature supports that no one sound or type of sound will meet all sound therapy needs. Preferences for sounds are likely to differ depending on one’s goals in a particular situation. For example, Henry et al3 showed that air and water sounds were judged as best from among a variety of different types of sounds for reducing annoyance to subjects’ tinnitus. For masking of tinnitus, they also found that more dynamic sounds, like rain, seem to be better compared to less dynamic sounds, like white noise.

Indeed, Searchfield et al4 showed that a rain sound was preferred over a white noise sound when it came to masking the tinnitus. However, dynamics are not the only important sound characteristic in determining preferences for sound therapy. This same study reported that music was the least favored sound for masking the tinnitus, even though music is dynamic. This was most likely due to the cognitive stimulation and the attention that music brings. When comparing rain sound, white noise, and music in relation to decreasing tinnitus annoyance, music was preferred over white noise, with rain once again being the most preferred.4

Based on this knowledge, ReSound enlisted the help of Delta SenseLab to assist in determining a selection of tinnitus relief sounds for use in a hearing aid. Delta SenseLab carries out subjective testing in the domains of audio, haptic/tactile, and visual stimuli, and specializes in evaluation and optimization of product sound quality. A trained test panel of listeners rated their preferences for 13 different sound stimuli, as well as their perceptions of each sound on varying attributes such as “pleasantness,” “natural-sounding,” and “distracting.” The sounds tested were white noise, a synthesized tonal sound, and a selection of natural sounds. The natural sounds included actual recordings of each sound, such as waves on a beach, as well as synthesized versions of these sounds. 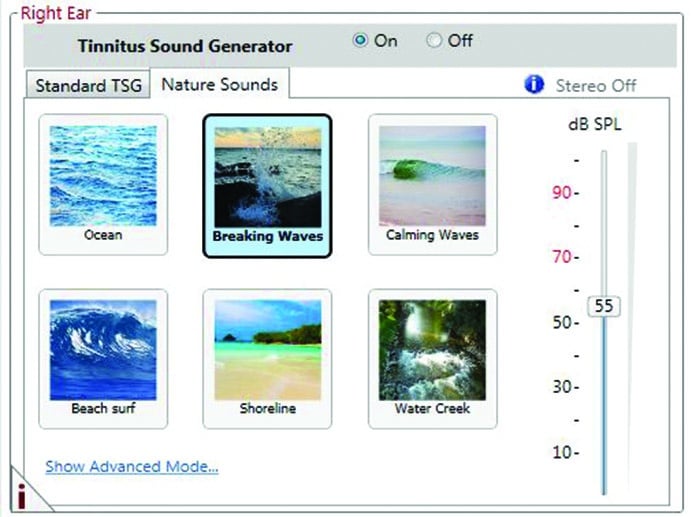 While the synthesized tonal sound was generally the least preferred, there was a very high degree of individual variation in preferences. The study concluded that a low rating of the attribute “annoyance” was the most important in determining preference. Interestingly, no significant differences in attribute or preference ratings were observed between the original natural sound recordings and the synthesized versions.

As a result, several of the synthesized sounds were recommended for use as general tinnitus relaxation sounds in the ReSound hearing aids. These sounds comprise the Nature Sounds feature within the Tinnitus Sound Generator (Figure 2).

How to Apply Sound Therapy

When it comes to sound therapy, there is obviously not a one-size-fits-all approach. You may be asking yourself, if there are so many sound therapy options to choose from, how do I know which ones to select and how to best provide them?

A good place to start is during the tinnitus consultation in which a lot of information is gathered and discussed. It typically encompasses a case history interview, administering tinnitus questionnaires, and collecting diagnostic information regarding the tinnitus.5,6 In addition, sound therapy and other counseling-related topics should be discussed. In that context, you could simply make a list of sounds that the patient finds pleasing and soothing, as well as a list of sounds the patient finds annoying and irritating. It is also helpful to identify any particular environments/situations where the patient notices their tinnitus to be more bothersome. From here you can start to select sounds preferred by the patient and to match particular sounds up with specific environments. Not all tinnitus patients require sound therapy guidance to this degree. Some will be content with selecting between only a couple of sounds.

Once the preferred sounds are identified, there are many ways to introduce these sounds. If a patient prefers broadband static noise, many of today’s hearing instruments offer a sound generator option that can easily provide this.6 Some sound generators also allow for modulated changes to the broadband sound, creating a more dynamic sound that can fluctuate in amplitude or frequency over time.

Just like we all prefer a different dessert after dinner, or a different genre of movie on a Saturday night, the individuality and variance of sound preference within the tinnitus population is an important aspect of which to be mindful. Choosing the correct sound to use in sound therapy can have a significant impact on treatment outcomes. With the flexibility of today’s technology, we have the opportunity to offer an almost endless array of sounds that can be selected by the individual themselves.

Innovative sound therapy solutions have been increasing rapidly over the last few years. With the advancements in smartphone and wireless technology, this flexibility can be maximized with the use of sound therapy apps, and/or music libraries on a smartphone or tablet.

There are many apps that can be used for sound therapy, such as the ReSound Relief™ app for tinnitus patients. The ReSound Relief app is a multisensory comprehensive app that helps educate people suffering from tinnitus, while providing personalized sound therapy options. Other sound therapy apps that are available are Relax Melodies®, My Noise®, and SleepStream®. As one app may offer different sounds than another, more than one app can be promoted to increase the sound therapy flexibility for a patient.

Sounds and relaxation exercises from these apps can be wirelessly streamed through hearing instruments today using 2.4 GHz technology, delivering sound therapy beyond the conventions of sound generators within hearing instruments. Additionally, the sound from the apps can be played through headphones and even a Bluetooth speaker if someone wants to use the app at night, while trying to fall asleep. The ReSound Relief app can be downloaded from either the App Store™ or GooglePlay™.

Other tools that can be used are sound pillows, which generate sound via a connected smartphone or MP3 player, and can be useful for people who have difficulty sleeping. More common everyday sounds, such as TVs, radios, fans, aquariums, or even opening a window to hear environmental sounds from outside should also be considered, as these are easily accessible in most households. In its simplest form, sound therapy is the introduction of an external sound to help “drown out” the tinnitus, and allow the individual to habituate to their tinnitus. With this in mind, many creative ways for introducing sound exist. It is up to us as clinicians to find the most effective ways of delivering sound to our patients.

We’ve come a long way since Thomas Edison introduced the phonograph in 1877, but the desire to personalize our auditory environments has echoed through the centuries. 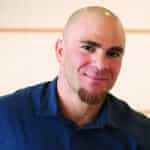 Michael Piskosz, MS, serves as a Senior Global Audiologist on the Global Audiology team for GN ReSound, Glenview, Ill, along with being the company’s International Product Manager for tinnitus. 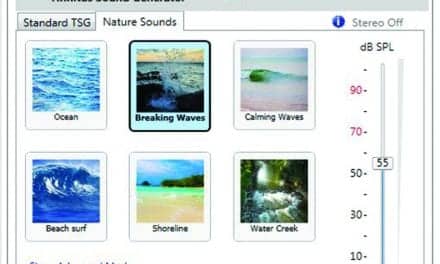