A researcher from the University of Alabama, Tuscaloosa, Ala, is embarking on a $5.6 million phase-three, randomized, controlled clinical trial to evaluate the effectiveness of a treatment that uses a noise-generating device, along with counseling, to alleviate the debilitating effects of tinnitus, says a statement from the university.

The non-medical habituation-based treatment being studied is known as Tinnitus Retraining Therapy or TRT. The investigational study of TRT will involve tinnitus sufferers drawn from the Navy, Marines, and Air Force, and will be conducted in Navy and Air Force flagship hospitals in California, Texas, Maryland, and Virginia. Researchers expect to recruit 228 participants for the study.

Craig Formby, PhD, UA distinguished graduate research professor in the department of communicative disorders, leads the NIH-sponsored study. Formby’s team at UA leads the clinical part of the study, which is funded by a $3.2 million award from the National Institute of Deafness and Other Communication Disorders. Researchers at Johns Hopkins University have received a $2.4 million award to manage and analyze the study data. The project will be spread over 5 years, including 4 years for recruiting study participants and conducting the treatment and follow-up measurements.

Tinnitus is the No 1 service-connected disability among veterans returning from the Middle East conflicts, says the statement. In 2008, compensation for tinnitus disability in the VA medical system alone exceeded $500 million and is projected to exceed $1.1 billion and affect more that 800,000 veterans by 2011.

Most people who have tinnitus ignore it, Formby says, but for some it’s torture. As many as 50 million Americans experience tinnitus. Estimates are that for about 2 to 5 million people, the problem is incapacitating.

“We know of reports of sufferers who have chronic debilitating tinnitus that is so troublesome that they would elect to cut the auditory nerve to get rid of the persistent ringing,” Formby said in the statement.

The current standard of care involves counseling people with debilitating tinnitus. The counselors typically try to help the tinnitus sufferer to manage the problem by suggesting coping strategies and by providing information about tinnitus, says the statement.

“The standard of care historically has included reassurance that the patient’s condition is not life threatening nor an indicator of imminent hearing loss,” Formby says.

Formby will compare the current standard of care for management of tinnitus in the military with TRT and with a placebo condition that will control for the treatment effects of the noise-generator component of the TRT treatment. After specialized TRT counseling to start the habituation process, each of the affected military personnel will use a pair of ear-worn noise-generator devices produced by General Hearing Instruments, New Orleans, which produce a soft seashell-like noise, which blends with the tinnitus.

“In TRT theory, the soft noise throughout the day from the noise generators helps to facilitate the habituation process, which is initiated by the counseling,” Formby said. “Patients are encouraged to use their devices from the time they start their day until the end of the day or at least for 8 hours a day. The patients are told to forget the devices are on. Don’t worry about the tinnitus, don’t keep a log, and don’t worry about how bad their tinnitus is from hour to hour or day to day; just go on with their lives.”

They are also taught about their auditory system and how it is believed to work together with parts of the brain and central nervous system to give rise to their debilitating tinnitus conditions.”

In the clinical trial, Formby and his coresearchers will measure treatment-related changes in the impact of the tinnitus on each participant’s daily activities. They also will track measures of perception, awareness, and annoyance of the tinnitus for each participant in the study. The questionnaire responses for participants who are assigned to the TRT treatment group will be compared with the responses of tinnitus patients given the current standard-of-care treatment for tinnitus in the military and with a third treatment group who are assigned to the placebo noise-generator control.

Formby has been working with the military since 1999, to develop the study protocol for this investigation, which is the first definitive phase-three clinical trial of TRT sponsored by NIH, said the statement. The clinical trial will take place at the Naval Hospital Camp Pendleton in Irvine, Calif; the National Naval Medical Center in Bethesda, Md; the Portsmouth Naval Hospital in Portsmouth, Va; the San Diego Naval Hospital; the David Grant Medical Center at Travis Air Force Base in Fairfield, Calif; and the Wilford Hall Medical Center at Lackland Air Force Base in San Antonio. 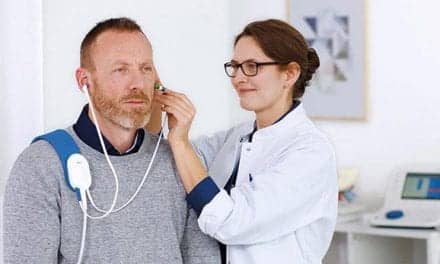