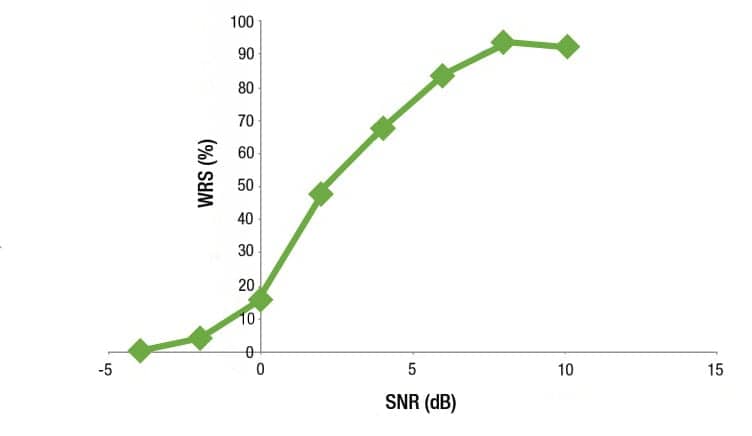 Back to Basics: October 2013 Hearing Review

I recall pouring over some articles back in 1980 that were even quite old at that time.  As far back as 1970, Carhart and Tillman1 suggested that we should have some speech-in-noise measure that can be performed clinically. Indeed, the 1970s saw a proliferation of new speech tests that were designed to be performed in a noisy background—names such as Plomp, Findlay, Olsen, and Jerger commonly popped up in the literature attesting to the benefits of speech-in-noise testing.

There were two problems with speech-in-noise-based word recognition tests back then:

1) The steep slope of the performance-intensity (PI) function, and

Directional hearing aid microphones and assistive listening devices were only in their infancy at that point; even if a benefit could be demonstrated by improving the signal-to-noise ratio (SNR), this would not result in anything substantive clinically. The other problem was the slope of the PI function for speech-in-noise tests.

Figure 1 shows a “typical” PI function that we all learned about in school for single-syllable words in quiet and in noise. The slope of the PI function is a measure of how much percentage change in word recognition ability there was as a function of presentation level or SNR. Early tests, such as the W-22, had a slope of about 2%/dB, meaning that for each increase in presentation level of 1 dB, there was an increase in word recognition ability of 2%.

When any noise was presented, the slope of the PI function increased by a factor of 4 to 5, meaning that an increase in SNR of 1 dB would translate to an improvement in word recognition ability by 10%. Indeed, this 10% improvement for every 1 dB improvement in SNR underlies the increased sales of assistive listening devices and use of directional microphones.

But Wait a Minute…

However, let’s take a step back. This 10% improvement can only be obtained when one is in the middle of the PI function, and depending on the nature of the noise and of the speech stimulus used. It is true that, with single-syllable words when measured in the center of the PI function, the slope is on the order of 10%/dB. But if we measure an improvement in more adverse listening situations, the improvement may be negligible. With the types of noise that Plomp et al2,3 used in the 1970s, at most he was only able to get improvements of 7%/dB. Others, using other types of noise, could only obtain 3%/dB.

There is also an inherent test-retest reliability issue when it comes to steeply sloping functions such as a PI function with noise. A small change in presentation level can result in a large change in WRS percentage correct.  Presentation of any complex stimulus, such as speech, has peaks and valleys, and it can be misleading to talk about speech being at 65 dB SPL—there are elements of speech that will be much greater and others that will be lower. This casts doubt on the validity of any exact numbers and any corresponding “improvements.”

At most—and this is actually still a lot—we can say that using directional microphones may help your client communicate better in a difficult listening situation, but for some that the benefit may be minimal. It’s like chicken soup: it may not help everyone, but some swear by it! At least it won’t hurt—unless you are allergic to chicken.

3.  Plomp R, Mimpin AM. Improving the reliability of testing the speech reception threshold for sentences. Audiology. 1979;18:43-52.