Critical Distance: How Far Can Musicians and Choir Members Be Spaced from Each Other?

During the Covid-19 pandemic, vocalist or instrumental musicians have all become concerned about our proximity to each other. It is likely these concerns for the safety of both the musicians/vocalists and the audience will remain well into the future, as some reports indicate music venues could represent “spreader events” during the pandemic, and research points to the potential for spreading other colds and flus to vulnerable populations during practices and performances.1-3

Increasing the distance between performers has been shown to benefit health by reducing viral spread, and one would hope the increased distance does not degrade the intelligibility of singing or the quality of instrumental music. Increased distancing would also have hearing conservation benefits for those who find themselves in a noisy instrumental environment.

A concept first delineated by Wallace Sabine, and expanded on by others, is Critical Distance.4 This is the physical distance where the sound arriving directly from the source would equal the reverberant or reflected sound level in the room. This distance turns out to be proportional to the Volume (V) of the performance venue in cubic meters, and inversely proportional to the Reverberation Time (RT60) which is the time required for a sound to decay to 60 dB below its initial level (Figure 1).  As the RT60 is inherent in the calculation of Critical Distance, it is worth reviewing some of its features.

A comparison between a quantity of “early reflections” arriving earlier than 80 msec after the direct sound and the “later reflections” which arrive after 80 msec can be quite useful in defining the acoustics of a musical venue (eg, see Chasin, 20165).  However, for the purposes of this article we will consider the Reverberation Time (RT60) to be the time taken for the sound to be attenuated to 60 dB below its initial value once the source has stopped, which includes both early and late reflections.

So all we really need to know are the physical dimensions of the room (to calculate the physical Volume, V) and a quick measure of its RT60 to gain information about the absorptive nature of the room surfaces.

A graph showing the calculation of the RT60 is shown in Figure 1, and while many acousticians have noted its bluntness as a predictor of sound or music quality in a room, it does provide a fairly good first estimate. One element of its bluntness is shown in Table 1. Despite having similar RT60 values, one of the halls is only rated as fair-to-good whereas another hall is rated as being superior. Table 2 shows some RT60s for various rooms.

…And Back to Critical Distance

Using the above formula, one may obtain an approximate distance (d) in meters, or one could actually measure it with a sound-level meter or appropriate smartphone app by assessing the gradual decline and then the plateau of the sound level as a function of increasing distance in the room.

One feature about the formula is that the RT60 contains a factor related to the absorptive characteristics of the surfaces in the performance venue.  Contributions from carpeting, acoustic tiling, seat cushions, and even the number of people in the audience (and their sound-absorbing attributes like weight, hair, etc!) are all factors in calculating the absorption of the sound energy. The RT60 includes those factors implicitly.

As an example, if we assume an arbitrary but commonly found RT60 of 1 second in a room that is 10 meters x 15 meters x 5 meters (ie, a volume of 750 cubic meters), the Critical Distance (d) would be ~ 0.057 x 27.4 = 1.56 meters, or about 5 feet. If singers in a choir or instrumental musicians were 5 feet apart they would hear each other reasonably well, and the audience would perceive good harmony and cohesion.

If the room was much larger (eg, 25 meters x 40 meters x 10 meters), such as many churches, but with a similar RT60 of 1 second, the Critical Distance would be 5.7 meters or around 18 feet, so the singers or instrumental musicians could be located farther apart and still hear each other, and the audience could still appreciate their music.

Of course, in practice, larger performance venues would have larger RT60 values (ie, higher than 1 second), so the Critical Distance would typically be less than 18 feet. Additionally, at larger distances, the participants would need to pay special attention to the conductor and listen carefully to overcome the inevitable time delays and sound-level reductions associated with such distances.

The first problem in attempting to space singers 10 feet apart (or 20 feet apart in one choir) was the almost universal objection from the singers that they would not be able to hear each other and blend well. A simple demonstration can calm most of the fears: When one of the co-authors, Dr Killion, a choir director, sang the phrase “Amazing Grace” at a high level (fff) at successive distances of 5, 10, 15, etc, to 40 feet, it became apparent to most that they were not being misled (Figure 2).

Although the blend was better than usual with everyone spread out, the basses said that they could not hear each other as well.   One solution for the basses was to give them HearHooks (MCK Audio) earphones with tiny 4-way-wireless modules that allowed the four basses to hear each other as if sitting in a section. The advantage of the open-ear HearHooks earphone is that the sound from the receivers is fed through a tube hooked over the ear. The open end is fitted in front of the ear canal, providing sound with a high-frequency boost. Wearers can hear people who have the other receivers, but they also can hear sounds around them.8 It decreases the cognitive effort required for processing audio input. In terms of the choir, it allowed the “bass section” to hear each other better, and we suddenly had a powerful bass section! HearHooks are a product of MCK Audio, a new research and product development company founded by co-author Dr Killion, and are available from Oaktree Products (www.oaktreeproducts.com).

These are strategies that performing artists can use when public health concerns allow them to meet together while still maintaining a “healthy” distance from each other (Figure 3). This would also have the hearing conservation benefit of being further from an instrumental musician who uses one of the louder instruments.

Citation for this article: Chasin M, Gastmeier B, Killion MC. Critical distance: How far can musicians and choir members be spaced from each other? Hearing Review. 2021;28(3):27-29. 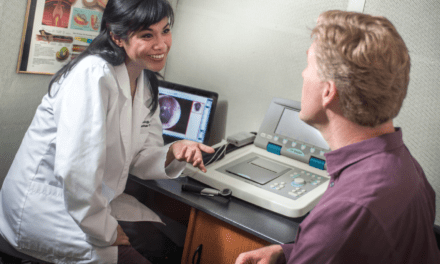 A Market Update and the Top-20 Trends in Hearing Care, Part 1