Every hearing care professional has had the experience of fitting hearing aids to a person with a mild-to-moderate hearing loss, only to have the instruments returned two weeks later. Reasons for rejection might include unnatural sound quality, discomfort, feedback, circuit noise, the hollow sound of the wearer’s own voice, or simply the lack of significant benefit. These and other, less specific and unstated issues—sometimes related to lifestyle, expectations, cosmetic concerns, or self-image—have led to rejection of hearing aids by people who may have received considerable benefit from them.

Today we have a new opportunity in the provision of hearing care. By updating an old, open-ear approach with new digital signal processing techniques and ongoing miniaturization, we now have great potential to penetrate the mild-loss market. Success in this large market segment assures practice growth for hearing care professionals and offers the benefits of amplification to a population that has been “sitting on the fence.” Furthermore, these benefits are being achieved with devices that are smaller, less intrusive, more comfortable, and more effective than their predecessors.

One advantage in attempting to capture this market of mild hearing losses is that open-ear devices are well suited to instant fits. When testing and counseling are completed, the device can be taken off the shelf, placed immediately in a patient’s ear, programmed, and fine-tuned to begin a hearing aid trial. The opportunity to show results immediately can only increase the likelihood of a favorable outcome.

Defining Open-Ear Instruments
Open fittings are not new. Hearing aid sound-delivery systems consisting of no more than a tube in the ear canal date back several decades and have been used in both eyeglass and behind-the-ear (BTE) instruments. Custom IROS designs in the 1980s used a similar minimalist approach to sound delivery, with much of the shell trimmed away at and beyond the aperture of the ear canal. These early renderings of the open-ear concept had a rather limited fitting range due to their susceptibility to feedback oscillation.

Before describing a specific open device, it may be helpful to consider what characteristics qualify a device for the open-ear designation. What exactly does “open” mean? The measurement of ear canal acoustics, in response to an external sound source with the hearing aid turned off, offers the best means of judging whether a device qualifies as open. Two measurements are made, one with nothing in the ear canal (except the probe tube used to make the measurement), the other with the hearing aid and delivery system in place but turned off. The former measurement is the real-ear unaided response (REUR), and the latter the real-ear occluded response (REOR).1,2 If the two are equal, or nearly so, we can conclude that the delivery system under evaluation is truly open. The device has little or no affect on sound passively entering the ear canal.

We use the term “acoustic transparency” to describe the fact that the presence of the hearing aid’s sound delivery system in the ear canal has minimal impact on ear-canal acoustics. An open-ear device then is one that is acoustically transparent when the aid is in place but turned off.

Examining an Open-Ear Instrument
In recent years, many manufacturers have reintroduced open-ear products to the market place, this time in instruments with advanced digital technology. For example, the Aspect Xtra from Starkey Labs (Figures 1) was designed as a micro BTE hearing instrument. The instrument is approximately 1.18 inches long and weighs 1.4 grams (by comparison, a dime weighs 2.27 grams). In place of a conventional earhook and No. 13 Tygon tubing, the hearing aid delivers its output through a pre-formed thin tube that hooks over the ear. The tube takes a slight upward angle as it enters the ear canal to accommodate the most typical canal geometry, and is available in five lengths and two insertion depths.

The tube terminates in a replaceable soft rubber earbud in the ear canal. Available in four sizes, the black earbud uses a radial-fin design to keep the ear canal open and prevent the earbud from collapsing on itself and compromising the openness of the fit. A retention lock on the tubing just above the earbud assists in securing it in the ear canal. A custom open earmold, called the Exact-Fit mold, which inserts into the ear canal, is available as an alternative to the standard earbud (Figure 1, inset).

Cosmetic Appeal and Comfort
The small aid size, thin tube diameter, and black color of the Aspect Xtra earbud all contribute to the cosmetic appeal of the instrument (Figure 2). Selection of the proper tube length is important in keeping the tube close to the head to minimize visibility, and is assisted by a gauge that measures the distance from the top of the pinna to the center of the ear canal. The black color of the earbud minimizes its visibility in the shadow of the ear canal.

Ten subjects were asked to rate comfort, retention, and their overall satisfaction with the Aspect Xtra after 14 days of use. Comfort rating categories ranged from “Very irritating” (rating of 1) to “Forget it is there” (rating of 5). Data from this evaluation, reported in Figure 3, show an average comfort rating of 4.5, or close to the top rating.

In addition to its light weight, small size, favorable shape, and soft earbud, comfort also depends on the aid staying in position in the ear without requiring repeated adjustments. Retention is optimized by: 1) the radial-fin design of the earbud, exerting gentle pressure against the canal wall; 2) the availability of various tubing lengths above and extending into the ear canal; 3) the slight upward angle of the preformed tube into the ear canal, and 4) the flexible retention lock that hooks under the posterior rim of the concha.

Acoustic Challenges and Solutions
Acoustic transparency and occlusion. One might reasonably expect that the acoustic quality of an aid for mild losses needs to be even better than that of an aid for more severe losses, for the simple reason that the patient with a mild loss is likely to scrutinize sound quality more closely. Current digital signal processing techniques have brought about considerable progress in addressing several acoustic issues, including occlusion effect, available gain before feedback, circuit noise, and natural sound quality.

The concept of acoustic transparency was introduced above as a means of qualifying an aid as open. To verify the openness of the Aspect Xtra, a probe microphone system was used to measure the REUR and REOR in 16 ear canals of 8 subjects.

These measurements show that the average ear-canal response is nearly the same in the two conditions, with the greatest separation (about 3 dB) in the frequency region from about 2500-3500 Hz (Figure 4). The data clearly demonstrate the acoustic transparency of the earbud design. (Indeed, the term real-ear occluded response, while essential to define the experimental protocol, becomes something of a misnomer since the ear canal is by no means occluded.)

The occlusion effect—the increased low-frequency sound pressure generated in the ear canal by the wearer’s voice—has been a traditional nemesis of many hearing aid wearers, especially those with mild losses.3 Dillon4 has reported that those with hearing losses of less than 40 dB at 500 Hz were likely to be bothered by occlusion. Efforts to develop a digital algorithm to reduce perceived occlusion have been largely unsuccessful. To date, an open fitting is the best tool to resolve occlusion concerns.

The acoustic transparency illustrated by the data in Figure 4 is a two-way street. Just as the open coupling system does not decrease low-frequency energy flowing into the ear canal, likewise it does not impede the outward flow of energy created in the ear canal by vibration of the cartilaginous canal wall.4 Thus, low-frequency energy created by vocalization builds up in the canal when it is occluded (Figure 5a) but is shunted to the atmosphere when the canal is unoccluded (Figure 5b) or blocked only by the acoustically transparent earbud (Figure 5c). With an effective, acoustically transparent, open-ear delivery system, occlusion effect is simply not an issue.5

Feedback. Even though large vents and tube fittings to resolve occlusion are not new approaches, an open path between receiver and microphone creates the worst possible feedback situation, and the benefit of these approaches in the past has been largely limited by feedback issues. In contrast, today’s open-ear instruments have the benefit of excellent adaptive feedback cancellation algorithms, allowing increased gain before feedback in an open system.

Real-ear aided gain of the Aspect Xtra was measured, using a 55 dB SPL composite noise as the input to the hearing aids (Figure 6). With the feedback cancellation algorithm active, the instruments were adjusted to the maximum gain achievable before feedback. The data produced an average peak gain of 40 dB across nine ears. Noteworthy here is the fact that, in all ears of this group, gain was set to its maximum available level, and even then no feedback occurred, an observation that will prove instructive in future design efforts.

Circuit noise and sound quality. Patients with mild hearing losses are also the ones most likely to complain about the noise floor of their hearing aids. A channel-specific expansion algorithm, such as that in the Aspect Xtra, can reduce perceived noise floor to an acceptable level.

Anecdotally, patients using open-ear instruments tend to report a more natural sound quality than other, conventional, instruments they have tried. While we do not have data specific to this question, the observation is most likely traceable not to advanced digital processing, but rather (once again) to the open design. The low-pass filter effect of the open fitting not only allows unwanted low-frequency sounds to escape from the canal; it also allows desirable low-frequency energy to enter the canal virtually unaltered. The net signal arriving at the eardrum is the sum of unamplified low-frequency energy bypassing the earbud, plus amplified high-frequency energy from the sound tube.

Response limitations. It’s rare in this world that we get something for nothing. The thin tube in the Aspect Xtra, designed to be cosmetically appealing and comfortable, is not without a trade-off in acoustic performance. Figure 7 shows the output of the Aspect Xtra receiver in response to a constant electrical input, with a standard No. 13 tube and the thin tube. Clearly the thin tube sacrifices output at frequencies above 1 kHz, when compared with the larger tube. Nevertheless, even with this more limited response, the aid was able to produce the gain shown in Figure 6. Furthermore, the benefit data reported below bear out the fact that this acoustic compromise does not take an unacceptable toll on final outcomes.

Patient Benefit
Beyond the cosmetic, comfort, and acoustic advantages, a patient’s ultimate decision to use hearing instruments also depends on benefit. To assess benefit, the Abbreviated Profile of Hearing Aid Benefit (APHAB)6 was administered to 10 subjects after 14 days using the Aspect Xtra devices. The subjects, 4 females and 6 males, ranged in age from 47 to 70, with a mean age of 58.6 years. Their average audiograms are shown in Figure 8. Five subjects were experienced hearing aid users, and all except one were binaurally fit with the Aspect Xtra devices.

The APHAB data in Figure 9 show an interesting result. Typically the Ease of Communication category, which represents listening to conversation in a quiet environment, shows a higher benefit score than the more challenging categories assessing communication in Reverberation and Background Noise. However, the present data show greater benefit in both of these more difficult conditions. While this result may seem perplexing at first, it can be explained by the fact that the subjects chosen for this evaluation had mild hearing losses, which presented them with little hearing difficulty in quiet settings. Because they do reasonably well unaided in quiet conditions, there is little room for them to show benefit when they wear hearing aids. On the other hand, the fact that they demonstrated greater benefit in the two more difficult conditions attests to the fact that they did experience difficulty in noise and reverberation and that the instruments offered significant benefit in those conditions. 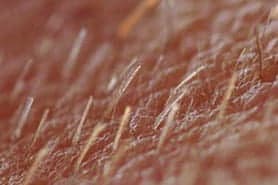