Siemens and SeboTek both reportedly expect the industry will continue to see a substantial growth in the number of RIC style instruments sold which will account for a larger percentage of the overall hearing aid market.  The terms of the patent license agreement with Siemens are confidential.

“Having a dominant player in the industry such as Siemens affirm the value and importance of the Hear-Wear portfolio has been a gratifying confirmation of the years of hard work and perseverance that went into our creation of the RIC product,” says Jim Feeley, president of SeboTek and Hear-Wear.  SeboTek launched its receiver in the canal technology to the industry at AAA in April 2003. We were not just introducing a new product but an entirely new style concept, Feeley says. “Ultimately, our goal was to create a hearing system that would change the traditional fitting process and improve the overall consumer experience.” 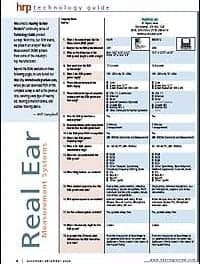