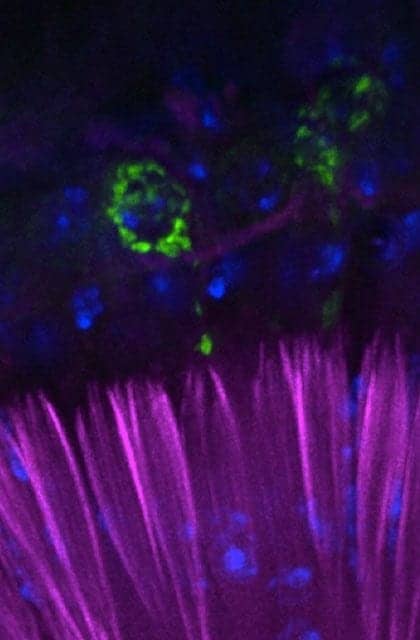 By Gary Galluzzo, University of Iowa

University of Iowa (UI) researchers say that the common fruit fly, Drosophila melanogaster, is an ideal model to study hearing loss in humans caused by loud noise. The reason: The molecular underpinnings to its hearing are roughly the same as with people.

As a result, scientists may choose to use the fruit fly to quicken the pace of research into the cause of noise-induced hearing loss and potential treatment for the condition, according to a paper published on August 30 in the online Early Edition of the journal Proceedings of the National Academy of Sciences.

“As far as we know, this is the first time anyone has used an insect system as a model for NIHL (noise-induced hearing loss),” says Daniel Eberl, UI biology professor and corresponding author on the study.

Hearing loss caused by loud noise encountered in an occupational or recreational setting is an expensive and growing health problem, as young people use ear buds to listen to loud music and especially as the aging Baby Boomer generation enters retirement. Despite this trend, “the molecular and physiological models involved in the problem or the recovery are not fully understood,” Eberl notes.

Enter the fruit fly as an unlikely proxy for researchers to learn more about how loud noises can damage the human ear. Eberl and Kevin Christie, lead author on the paper and a post-doctoral researcher in biology, say they were motivated by the prospect of finding a model that may hasten the day when medical researchers can fully understand the factors involved in noise-induced hearing loss and how to alleviate the problem. The study arose from a pilot project conducted by UI undergraduate student Wes Smith, in Eberl’s lab.

“The fruit fly model is superior to other models in genetic flexibility, cost, and ease of testing,” Christie says.

The fly uses its antenna as its ear, which resonates in response to courtship songs generated by wing vibration. The researchers exposed a test group of flies to a loud, 120 dB tone that lies in the center of a fruit fly’s range of sounds it can hear. This over-stimulated their auditory system, similar to exposure at a rock concert or to a jackhammer. Later, the flies’ hearing was tested by playing a series of song pulses at a naturalistic volume, and measuring the physiological response by inserting tiny electrodes into their antennae. The fruit flies receiving the loud tone were found to have their hearing impaired relative to the control group.

When the flies were tested again a week later, those exposed to noise had recovered normal hearing levels. In addition, when the structure of the flies’ ears was examined in detail, the researchers discovered that nerve cells of the noise-rattled flies showed signs that they had been exposed to stress, including altered shapes of the mitochondria, which are responsible for generating most of a cell’s energy supply. Flies with a mutation making them susceptible to stress not only showed more severe reductions in hearing ability and more prominent changes in mitochondria shape, but they still had deficits in hearing 7 days later, when normal flies had recovered.

The effects on the molecular underpinnings of the fruit fly’s ear are the same as experienced by humans, making the tests generally applicable to people, the researchers note.

“We found that fruit flies exhibit acoustic trauma effects resembling those found in vertebrates, including inducing metabolic stress in sensory cells,” Eberl says. “Our report is the first to report noise trauma in Drosophila and is a foundation for studying molecular and genetic conditions resulting from NIHL.”

“We hope eventually to use the system to look at how genetic pathways change in response to NIHL. Also, we would like to learn how the modification of genetic pathways might reduce the effects of noise trauma,” Christie adds.

The research was supported by the National Institutes of Health (grant number R21 DC011397) to Eberl and to Steven Green (grant number P30 DC10362) in support of the Iowa Center for Molecular Auditory Neuroscience.