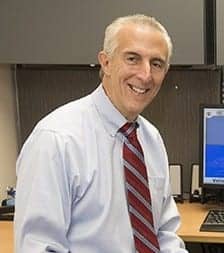 Jay Piccirillo, MD, a lead researcher in the clinical trial at WUSTL that investigated a new therapy combining computer-based cognitive training with a drug that helps boost the effectiveness of that training so tinnitus patients can ignore the ringing in their ears.

According to a study published online by JAMA Otolaryngology-Head & Neck Surgery, tinnitus patients self-reported that their cognitive deficits improved while using the medication D-cycloserine in conjunction with a computer-assisted cognitive training (CT) program. However, study results showed that these combined therapies—aimed at improving symptoms of tinnitus (persistent ringing in the ears) and its related cognitive difficulties—were no more effective than placebo.

There is no cure for tinnitus and, according to the recent study report, the condition stems from a disruption or reorganization of the brain’s neural network, with cognitive difficulties being among the most common symptoms. Neuroplasticity is the brain’s ability to adapt through reorganization of its structure and synaptic connections, and evidence surrounding neuroplasticity has led to the popularity of computer programs aimed at recovering cognitive function.

Researcher James G. Krings, MD, of the Washington University School of Medicine in St. Louis, Jay Piccirillo, MD, and colleagues focused on targeting the aberrant neural network changes and cognitive deficits found in patients with tinnitus with the help of a computer CT program and a potential neuroplasticity-enhancing medication in a randomized clinical trial that included 30 patients in the analysis.

During the trial, the difference in change in the Tinnitus Functional Index (TFI) score was measured. All patients received CT through the computer program; 16 of 30 patients in the analysis received D-cycloserine and 14 were given placebo.

According to reports from the WUSTL researchers, the median change in the TFI score after the intervention was -5.8 points for the D-cycloserine group compared with baseline and, although this difference was statistically significant, it did not reach a minimally clinically significant difference. However, the study did find in the D-cycloserine group greater improvement in self-reported cognitive deficits associated with tinnitus compared with placebo.

“This finding may be important given the particularly high rate of concerns about cognitive difficulties associated with tinnitus, and this treatment could be particularly useful in a subset of patients with tinnitus,” said James G. Krings, MD. “Future research is needed to replicate these findings, preferably in a larger sample that might allow detection of additional effects.”

Editor’s Note: An author made a conflict of interest disclosure. This research was supported by a grant from the Doris Duke Clinical Research Foundation, as well as support from the Stanford University Medical Scholars Fellowship. Posit Science provided access to the Brain Fitness Program for all participants. Please see article for additional information, including other authors, author contributions and affiliations, financial disclosures, funding and support, etc.

An author podcast with Dr. Piccirillo is available courtesy of the JAMA Otolaryngology-Head & Neck Surgery website.