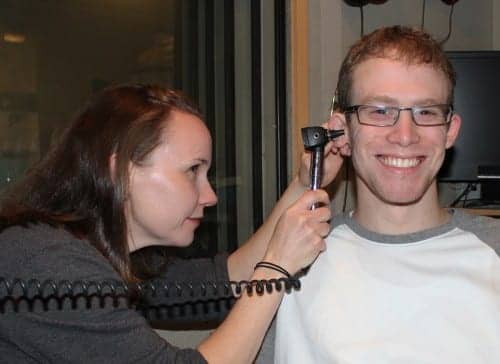 The National Institutes of Health (NIH) announced that audiologists and other research staff from the National Institute on Deafness and Other Communication Disorders (NIDCD) will continue their research on a rare disease called Niemann-Pick disease type C (NPC), thanks to funding from a biotechnology company. The NIDCD audiology and research team has entered into an agreement with Vtesse, Inc, Gaithersburg, Maryland, to develop treatments for NPC and other lysosomal storage disorders. 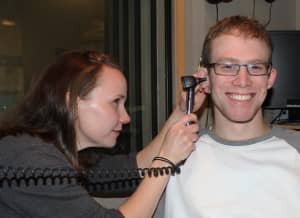 NIDCD research audiologist Kelly King, AuD, PhD, examines NPC patient Chris Fortin’s hearing at the Audiology Unit at the NIH Clinical Center. Fortin is a volunteer in the clinical trial to test the safety of a new drug for NPC.

According to the NIH, the new agreement with Vtesse will allow the NIDCD team to proceed with an ongoing clinical treatment study at the NIH’s Clinical Center that involves patients with NPC, a debilitating and often fatal genetic disease. Scientists from the Eunice Kennedy Shriver National Institute of Child Health and Human Development (NICHD) are leading the phase I clinical trial of cyclodextrin, a promising new therapy for NPC. The funding from Vtesse will also reportedly support new clinical and laboratory studies on potential treatments for NPC and related disorders, to be conducted in collaboration with NICHD, the National Center for Advancing Translational Sciences (NCATS), and others within the NIH. 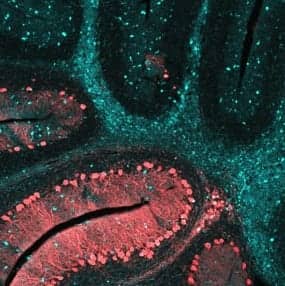 This NIH/NIDCD image shows the cerebellum of a brain affected by NPC disease. The blue staining shows the dense pockets of lipid accumulations throughout the brain.

Lysosomal storage disorders, also known as lipid storage diseases, primarily affect children, according to the NIH and NIDCD websites. Some of these disorders, such as NPC, may be fatal by early adulthood. Fatty materials in the cells and tissues of the body accumulate, damaging the brain, peripheral nervous system, liver, other organs, and tissues. Patients with NPC develop problems such as trouble swallowing and walking, and may progressively lose their vision and hearing. There is currently no effective treatment for NPC.

According to the NIDCD, researchers in the National Center for Advancing Translational Sciences’ Therapeutics for Rare and Neglected Diseases (TRND) program developed cyclodextrin as part of a project focused on finding treatments for NPC. The goal of TRND projects is to develop therapeutic approaches in the laboratory to the stage where they attract biotechnology and pharmaceutical companies to invest in their further clinical development. The NPC project is a collaboration among government, academic, and industry researchers, who worked with patient groups and the NPC community to advance knowledge about the disease.

Ongoing studies by the NIDCD have demonstrated that NPC contributes to significant and progressive hearing loss. Confounding this is evidence that cyclodextrin has been shown to contribute to hearing loss by damaging the ear. During the ongoing phase I clinical trial, NIDCD research audiologists are closely monitoring the hearing of study patients to determine what doses of cyclodextrin are dangerous for hearing and who may be most at risk for hearing loss. Together with NIDCD otologist, Michael Hoa, MD, the audiology team plays an active role in supporting families enrolled in the trial and helping those with hearing loss to obtain appropriate management and care. 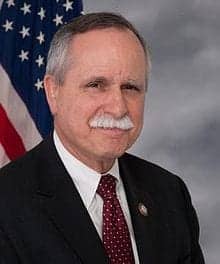 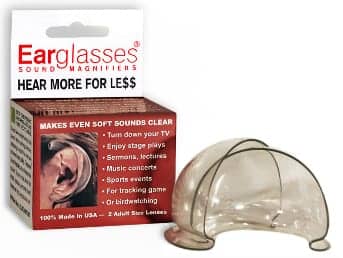 Age-old Approach for Enhanced Directional Hearing Gets a Novel Twist 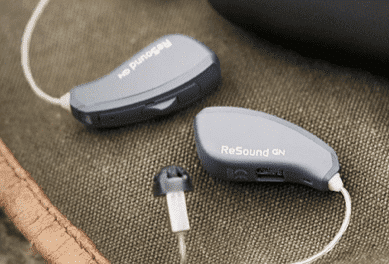