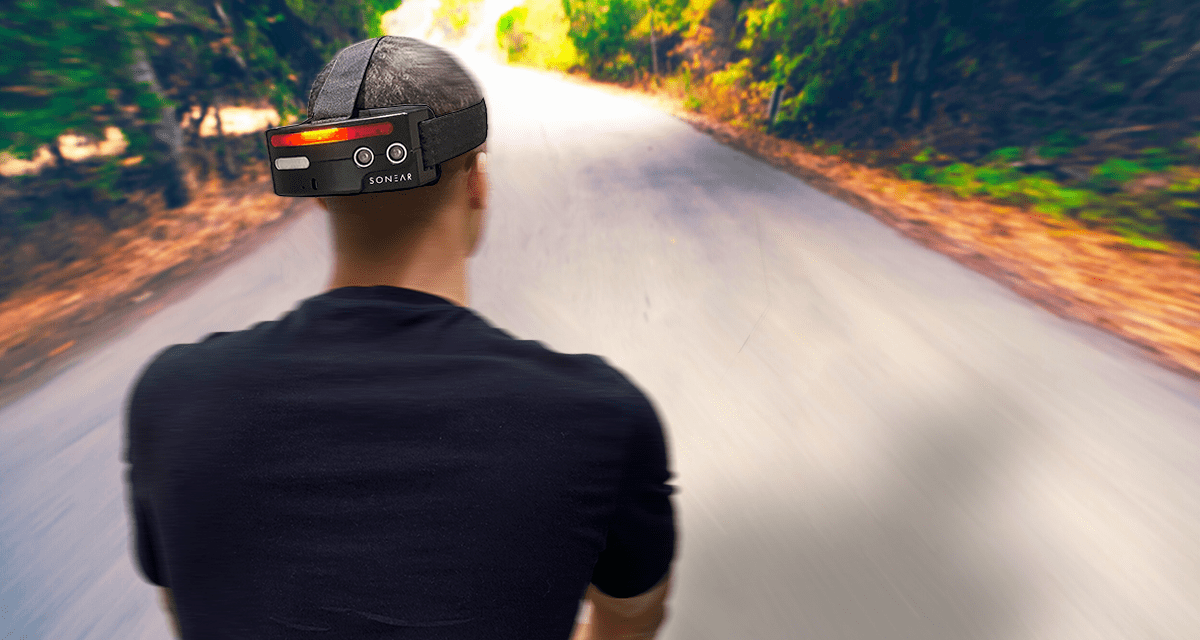 A new device that helps deaf cyclists pinpoint the location of undetected passing traffic has been unveiled by a student from Brunel Design School. Industrial designer Divine Okoroji, who was born deaf in one ear, said he hopes the device will give the hard of hearing more confidence on their bike. An article detailing the device appears on the Brunel University website.

“I never really used to cycle on the road,” said Okoroji, 22, from London. “I felt like I was always getting myself into positions where I was having near-misses, and that I’d probably be more confident and aware on the road if I could hear better.”

The slickly-designed device – SONEAR – uses ultrasonic sensors to monitor traffic, letting the user know when a vehicle is in their proximity by delivering small vibrations to the back of their head. As cars get closer, the tingling vibration increases, allowing the cyclist to ‘feel’ the car’s proximity to them. Due to be exhibited at Made in Brunel at London’s Oxo Tower, the flagship design show for students from Brunel Design School, Okoroji hopes that his device can help deaf people participate in cycling’s ‘bike boom’ that first began with the COVID-19 pandemic.

Sonear is designed to be worn without a helmet, although Okoroji says that far from being a safety concern, it’s a feature born from a ‘user-centered design’ approach – a decision supported by his research.

“The most impactful findings were from the deaf community, as some members expressed that they choose not to wear helmets when cycling because they fell that cars give them more space. It makes them feel much more comfortable whilst cycling on the road,” he said. “Sonear is designed to be worn without a helmet and this approach appeals to the target audience, and respects and understands the needs and wants of deaf cyclists”

Traditional hearing aids, which amplify the volume of someone’s surroundings, can help people with partial deafness hear sounds clearer. However, they can perform poorly for cyclists due to wind noise and the overwhelming amplification of surrounding traffic sounds. The designer also notes that while 80% of the 11 million deaf individuals who live in the UK could be treated with hearing aids, only 25% of that figure actual benefit from hearing aids.

The soon-to-graduate designer hopes that he might now be able to work with the likes of the RNID (Royal National Institute for Deaf People) to develop it into an attractive commercial product.

“There’s been a big rise in cycling because people don’t want to catch public transport anymore. And this has triggered a healthier lifestyle in some people – I think Sonear can start to include more people in that,” he said.